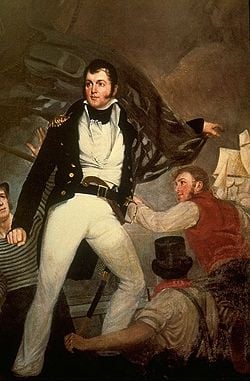 Commodore Oliver Hazard Perry (August 23, 1785 – August 23, 1819) was an officer in the United States Navy. He served in the War of 1812 against Britain. Perry and his men constructed a squadron of ships and proceeded to defeat a British squadron at the Battle of Lake Erie. Perry’s victory ensured control of Lake Erie for the remainder of the war.

Oliver was the son of Captain Christopher Raymond Perry and Sarah Wallace Alexander, and his younger brother was Matthew C. Perry, the brother-in-law of John Slidell.

Educated in Newport, Rhode Island, Perry was appointed a midshipman on April 7, 1799, and assigned to his father's frigate, General Greene.

Over the next six years Perry participated in the Quasi-War with France and the First Barbary War against the Barbary pirates.

The frigate sailed June 2, 1799, joining USS Governor Jay in convoying five merchant ships bound for Havana, Cuba. Damage suffered in a heavy gale caused her to put in at Havana for repairs. While there, Yellow fever ravaged the crew. After more than 20 seamen perished, Captain Perry sailed back to Newport, Rhode Island, and arrived on July 27, with 37 men in various stages of recovery. After a thorough cleaning, fumigation, and change of ballast, he departed Newport on September 23, 1799, to take station at Cap Francois, San Domingo.

The General Greene remained on station at San Domingo for the following 6 months. In company with USS Boston on December 1, 1799, Perry took part in the Phony War with France and assisted in the capture of schooner Flying Fish and the retaking of the American schooner Weymouth, captured by French privateer FS Hope. Following that, much of his time aboard his father's ship was spent watching over the rebellion against General Toussaint in Haiti.

Oliver Perry first experienced combat on February 9, 1800, when the General Greene blockaded the port of Jaemel, cutting off supplies to the revolutionists. The frigate gave direct gunfire support to General Toussaint's army in the capture of Jaemel on February 27, 1800. She remained there as a possible haven for American citizens until April 27; then sailed with two representatives sent by General Toussaint for audience with the President of the United States, John Adams. Touching New Orleans, Louisiana, she embarked General James Wilkinson and his family for transport home. She then proceeded as escort to 12 merchant ships bound to Havana, then to Newport, where the General Greene arrived on July 21, 1800.

During the First Barbary War, Perry served on the USS Adams, Constellation, Essex, and Constitution, although without any particular distinguishing achievements until in command of the 12 gun USS Nautilus. Perry participated in the American victory at the battle Derna on April 27, 1805. Following Derna, Perry sailed the Mediterranean Sea on various missions and at the end of May, 1805, returned to Tripoli. On June 10, hostilities ceased with the signing of a peace treaty.

Nautilus remained in the Mediterranean for a year after the treaty went into effect, conducting operations from Malta and Gibraltar. In the spring of 1806, Perry's ship was assigned to Algiers for dispatch duty, and sailed in June for the United States.

After an extended shore leave in 1806-07, The U.S. Navy ordered Perry to oversee the construction of a flotilla of small gunboats to serve as protection for Rhode Island and Connecticut. Reportedly, Perry fulfilled his orders completely but considered this duty tedious. As his assignment concluded in April 1809, he received his next seagoing command, the USS Revenge, a 14 gun schooner.[1]

At his request during the War of 1812, he was given command of U.S. Naval forces on Lake Erie. He supervised the building of a small fleet at what is now Erie, Pennsylvania. On September 10, 1813, Perry's fleet defended against an attacking British fleet at the Battle of Lake Erie. During the battle Perry's flagship, USS Lawrence, was destroyed and Perry rowed a half-mile through heavy gunfire to transfer command to the Niagara, carrying his battle flag which read, "DON'T GIVE UP THE SHIP," a famous battle cry of naval hero James Lawrence. His battle report after victory is famous: "We have met the enemy and they are ours; two ships, two brigs, one schooner, and one sloop."

While this opened Canada up to possible invasion, it simultaneously protected the entire Ohio Valley. It was the only significant fleet engagement of the war. 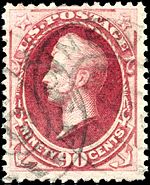 Perry was honored on 90-cent postage stamps of the late nineteenth century; this one is from 1879.

In 1819, during an expedition to the Orinoco River in Venezuela, he died of disease caused by indigenous insects while aboard the U.S. Schooner Nunsuch. His body was originally buried in Port of Spain, Trinidad, but his remains were later moved to Newport, Rhode Island. After briefly resting in the Old Common Burial Ground in Newport, his body was moved a final time to Newport's Island Cemetery where his brother Matthew Perry is also buried.

A memorial was erected at his grave site in Newport. There are also monuments to Perry at Put-in-Bay, Ohio, and Presque Isle State Park in Erie, Pennsylvania.

During the twentieth century, the United States Navy named the lead ship of a class of guided missile frigates after Perry, the Oliver Hazard Perry class.