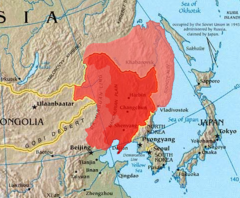 Greater Manchuria: The Russian sector is the lighter red region to the upper right.

The Treaty of Portsmouth formally ended the 1904-05 Russo-Japanese War. It was signed on September 5, 1905, at the Portsmouth Naval Shipyard near Portsmouth, New Hampshire, in the United States, by Sergius Witte and Roman Rosen for Russia, and by Komura Jutaro and Takahira Kogoro for Japan.

In accordance with the treaty, both Japan and Russia agreed to evacuate Manchuria and return its sovereignty to China. However, Japan was allowed to lease from China the Liaodong Peninsula (containing Port Arthur and Dalian), including the Russian rail system in southern Manchuria, with access to strategic resources. Japan also received the southern half of the island of Sakhalin from Russia.

Although Japan gained a great deal from the treaty, it was not nearly as much as the Japanese public had been led to expect, since Japan's initial negotiating position had demanded all of Sakhalin and a monetary indemnity from Russia as well. The frustration caused the Hibiya riots and the collapse of Prime Minister Katsura Taro's cabinet on January 7, 1906. Nevertheless, subsequent history would mark the treaty as a turning point in favor of Japan, whose fortunes would rise dramatically in the succeeding decade and beyond.

The 1906 Nobel Peace Prize was awarded to Theodore Roosevelt for negotiating the peace between Russia and Japan. In hindsight, the award is not without irony, since the treaty is seen by many as encouraging Japan's imperial ambitions and militaristic policy, as well as demonstrating the developed world's insensitivity to the plight of smaller and weaker nations, especially Korea. 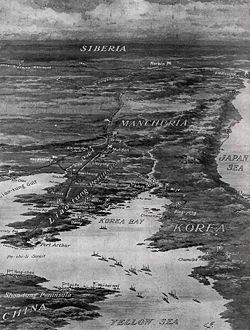 Battlefields of the Russo-Japanese War

Although Russia still had a larger army than Japan, successive defeats had shaken Russian confidence. Russia was also rocked by the Russian Revolution of 1905, which posed a severe threat to the stability of the government. Russia elected to negotiate peace rather than continue the Russo-Japanese War, so that it could concentrate on internal matters.

Japan, meanwhile, was distraught financially and in terms of military strength. Both sides were thus seeking a peace, although the tide of the war had turned decidedly in Japan's favor.

Prior to the beginning of the negotiations, the Japanese had signed the Taft-Katsura Agreement, a secret diplomatic memorandum signed between then-U.S. Secretary of War William Howard Taft and Prime Minister of Japan Katsura Taro on July 29, 1905. In it, the United States recognized Japan's sphere of influence in Korea in exchange for Japan recognizing the United States' sphere of influence in the Philippines. The agreement was not publicized until 1924, and was not a bilaterally signed document or secret treaty, but simply a meeting memorandum meant to smooth over Japanese-American relations.

President Theodore Roosevelt offered to mediate between the two warring nations, and the Portsmouth Naval Shipyard was designated as the site at which the terms would be decided. Negotiations lasted through August. On September 5, 1905, the Treaty of Portsmouth was signed, with Russia agreeing to recognize Japan’s “special interests” in Korea. Further, Russia agreed to grant Japan the lease of the Liaodong Peninsula along with economic rights in southern Manchuria, including its railroads. Finally, Russia gave Japan the southern half of Sakhalin together with special fishing rights.

The significance of the treaty ending the Russo-Japanese War was enormous, not only for the two warring nations, but many others as well. The treaty confirmed Japan's emergence as the preeminent power in East Asia and forced Russia to abandon its expansionist policies there, but it was not well-received by the Japanese public.

However, after hearing the success stories about the war for 18 months, the Japanese public was extremely dissatisfied with the terms of the treaty. They felt the victory should be far more decisive than what the peace terms granted, both in terms of land and monetary concessions from Russia. When riots broke out in Tokyo against the Katsura government, led by extreme nationalist groups, troops were brought in and martial law was declared before order was restored.

At the same time, although many Japanese were in disagreement with the peace terms, they were proud of the demonstrated international power that their nation had not experienced for centuries. Along with the proven success of the Meiji modernization, Japan’s wartime victory was credited to the growing influence of the nation's militarists. Many Japanese learned the lesson that “war pays high dividends” and was an effective means to solve a diplomatic impasse. In the end, Japan’s victory had given her control of southern Manchuria, a region that was beneficial as a market for Japanese products and as a source of raw materials for Japanese industry. Japan could therefore further its industrialization, especially in heavy industries, thus starting the so-called second phase of industrial revolution in Meiji Japan.

East Asian nations now looked to Japan as a model of independence from European control. Through its victory, Japan demonstrated that Westerners were not invincible. From 1905, in one colony after another, an organized independence movement began. Then, with Japan gaining footholds on the mainland in Korea and Manchuria, the nation's second advance into the Far East began, which acted as bridgeheads for future imperial advances, particularly during the First World War.

Japan’s victory over Russia was acclaimed by the British, and in August 1905, the Anglo-Japanese Alliance was renewed, two years before its termination. For Japan, the renewal of this alliance helped stave off Russian retaliation and brought British approval of its dominance of Korea. In return, Japan would recognize British interests in the Yangtze area, Southeast Asia, and India. In 1911, the Alliance was renewed for another ten years, during which time Japan was able to enter World War I against Germany. Later, the Alliance was replaced by the Four Power Treaty in 1922. Nonetheless, Anglo-Japanese relations continued to be friendly, and Japan was regarded by Britain as an important ally in the Far East in the 1920s.

Japan had stopped the Russian advance and downgraded Russian power in Korea and South Manchuria, leaving her only with a foothold in northern Manchuria. Although the end of the Russian threat in Korea opened the door for a Russo-Japanese rapprochement, the renewal of the Anglo-Japanese Alliance was a possible source of hostility. However, Russia turned its interest away from the Far East to a focus on the Balkans, and the two recent enemies befriended each other. In 1907, a Russo-Japanese convention was signed which—in its secret clauses—divided Manchuria into Russian and Japanese spheres of influence.

Relations with the U.S. and France

The United States, however, became concerned over the rapid ascension in power of Imperial Japan. Unhappy with Japanese advances in Manchuria—a violation of the Open Door Policy—the U.S. also was alarmed about the security of its Pacific possession, the Philippines. Therefore, in 1905 and 1908, Japan and the United States reached two agreements promising to respect each other’s possessions in the Far East. However, worsening Japanese-American relations in the 1910s led to conflicts. In 1907, France and Japan signed a treaty to respect each other’s interests on the Asian continent, particularly in relation to their spheres of influence in China.

Even though the Russo-Japanese War was fought on Chinese territory, China was powerless to to do more than recognize Manchuria as a neutral zone. At the war's end, China's Qing Dynasty was not even consulted about the peace terms, while Russia's transfer to Japan of the Liaodong leasehold and the railway rights in southern Manchuria were only reluctantly agreed upon by the Qing government.

1905 proved a turning point in Chinese history. The humiliation suffered by China from the war directly stimulated the Chinese revolutionary movement. While the Tung Meng-hui was founded by Sun Yat-sen to overthrow the Manchus, the Qing government, in an effort to save itself, sped up reforms. Meanwhile, Chinese reformers strongly promoted emulation of both Japan's reform practices and modernization policies. In this spirit, in 1905 the Manchus abolished the century-old civil-service examination and held out the promise of a constitutional monarchy.

Japan fought the Russo-Japanese War chiefly to protect its interests in Korea. However, with Russia defeated, the U.S. promising non-interference in Korea, and Britain as an ally, Japan could tighten its control over Korea. In November 1905, Japan compelled the Korean king to accept a Japanese resident-general, who would have control over Korea's foreign affairs. In 1907, Japanese advisers exercised control over Korean legislative and executive affairs, thus diminishing Korea to a virtual Japanese colony. In 1909, Japan's former prime minister and former resident-general of Korea Prince Itō Hirobumi was assassinated by a Korean nationalist, giving the Tokyo government an excuse to annex Korea, which took place in August 1910. Thus, Japan would rule Korea directly for 35 years. Eventually the Korean language and culture were disallowed and many Korean people experienced virtual slavery under the Japanese rule.

Retrieved from https://www.newworldencyclopedia.org/p/index.php?title=Treaty_of_Portsmouth&oldid=1085706
Categories:
Hidden category:
This page was last edited on 5 November 2022, at 04:51.
Content is available under Creative Commons Attribution/Share-Alike License; additional terms may apply. See Terms of Use for details.