Map showing Hong Kong and Macao as Special Administrative Regions of China since 1999.

The Treaty of Nanking (Nánjīng Tiáoyuē) is the agreement which marked the end of the First Opium War between the United Kingdom and China. It was signed on August 29, 1842, aboard the British warship HMS Cornwallis in Nanjing (then known as "Nanking"). It is the first of the Unequal Treaties signed by China with a foreign power in which British citizens in China gained immunity from prosecution under Chinese law. The treaty resulted in the creation of the crown colony of Hong Kong, which remained under British control until 1997, when, under terms agreed with the Peoples Republic of China it again became part of China.

The establishment of Hong Kong and of other Treaty Port settlements, such as the International zone in Shanghai, represented a development in British imperial policy which where possible expanded influence without asserting sovereignty. Similar concessions, known as "capitulations," were negotiated with the Ottoman Empire and in such countries as Iran. China, apart from small European enclaves such as Hong Kong and nearby Portuguese Macao was never colonized, although the great powers increasingly exercised political influence, resented by the Chinese. The Opium Wars rank among the most immoral of all imperial conflicts (Opium trade was actually prohibited in Great Britain).

Although a modestly sized colony, Hong Kong's strategic and economic importance was considerable and it was treasured as a jewel in the East of the British Empire. For many, its transfer to Chinese control in 1997 represented a symbolic end of empire and of a colonial way of life. Hong Kong was, and remains, significant as a place where cultures meet, mingle and fuse. The return of Hong Kong to China can be said to have put an end to the last continuing provisions of the Treaty of Nanking, most of which had already been consigned to history. 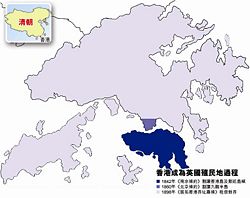 Great Britain acquired Hong Kong Island in 1842, Kowloon Peninsula in 1860, and leased the New Territories in 1898.

Following its ban on the opium trade of 1839, the Chinese were accused of attacking and destroying British property, presumably opium which was ordered confiscated on March 27. The Queen saw the destruction of British products as an insult and sent the first expeditionary force to defend British "ancient rights of commerce" in June 1840. The First Opium War (1839-1842) began at the hands of Captain Charles Elliot of the Royal Navy and Capt. Anthony Blaxland Stransham of the Royal Marines. After a series of Chinese defeats, Hong Kong Island was occupied by the British on January 20, 1841. Sir Edward Belcher, aboard the HMS Sulphur landed in Hong Kong, on January 25, 1841. Possession Street still exists to mark the event, although its Chinese name means "Mouth of the ditch Street."

The Birth of Hong Kong

Commodore Sir Gordon Bremer raised the Union Jack and claimed Hong Kong as a colony on January 26, 1841. It erected naval store sheds there in April, 1841.

Across the Bay, the Portuguese colony of Macao was already established as the oldest European settlement in East Asia. Settled as early as 1552, the territory—a small peninsula and some islands—was technically leased from China from 1670, also resisting Dutch ambitions. Like Hong Kong, it has also reverted to China (at the end of 1999). Although not part of the provisions of the Treaty of Nanking, Macao was viewed in much the same way as Hong Kong was by the Chinese and thus shared its fate as a foreign "possession." The Chinese of Macao, though, were awarded full Portuguese citizenship, while very few Hong Kong Chinese enjoyed British citizenship—most were British Overseas Citizens which did not carry the right to live in the United Kingdom.

The island was first used by the British as a staging post during the war, and while the East India Company intended to establish a permanent base on the island of Zhoushan, Elliot took it upon himself to claim the island on a permanent basis. The ostensible authority for the occupation was negotiated between Captain Eliot and the Governor of Kwangtung Province. The Convention of Chuenpeh was concluded but had not been recognized by the court of Qing Dynasty at Beijing. Subsequently, Hong Kong Island was ceded to Britain in 1842 under the Treaty of Nanking, at which point in time the territory became a Crown Colony.

Did you know?
The Treaty of Nanking ended the First Opium War between the United Kingdom and China

The Opium War was ostensibly fought to liberalize trade to China. With a base in Hong Kong, British traders, opium dealers, and merchants launched the city which would become the 'free trade' nexus of the East. American opium traders and merchant bankers such as the Russell, Perkins and the Forbes family would soon join the trade. Britain was granted a perpetual lease on the Kowloon Peninsula under the 1860 Convention of Beijing, which formally ended hostilities in the Second Opium War (1856-1858).

Under the treaty, China agreed to cede Hong Kong Island (together with some small nearby islands) to the British Empire, and open the following treaty ports of China for foreign trade:

(The first of the romanizations are in Postal map spelling, which were used in the treaty; the second Hanyu Pinyin, the modern spellings.)

In addition to these indemnities, China allowed British missionaries into the interior of China for the first time, and allowed British merchants to establish "spheres of influence" in and around British ports. As a result of missionary activity the Christian community in China is about 13 million, although foreign missionaries left after the Communist revolution. Some relocated to Hong Kong, from where several missionary societies continued to find ways of communicating with Chinese Christians.

The treaty left several unsettled issues. In particular it did not resolve the status of the opium trade with China, which was profitable for the British and devastating to the Chinese. The equivalent American treaty forbade the opium trade, but, as both the British and American merchants were only subject to the legal control of their consuls, the trade continued.

Hong Kong: Jewel in the East

In 1898 the United Kingdom was concerned that Hong Kong could not be defended unless surrounding areas were also under British control. In response a 99-year lease titled the Second Convention of Peking was drafted and executed, significantly expanding the size of Hong Kong via the addition of the New Territories. The lease was set to expire at midnight, on June 30, 1997.

The establishment of the free port made Hong Kong a major entrepôt from the start, attracting people from China and Europe alike. A de facto segregation existed between the European minority and the Chinese majority and to a large extent the society remained segregated and polarized due to language barriers. Cultural diffusion, though, did occur and Hong Kong's colleges and Universities were venues for the training of scholars in Confucian thought, Mandarin (though Cantonese is spoken in Hong Kong), and in other aspects of Chinese culture. The slow rise of a British-educated Chinese upper class of the late nineteenth century forced the creation of racial laws such as the Peak Reservation Ordinance, which prevented Chinese from living in upscale Victoria Peak.

The Chinese society had little to no official governmental influence throughout much of the early years. Some of the small number of Chinese elites that the British governors could rely on included Sir Kai Ho and Robert Hotung. They understood where Hong Kong was in terms of development, and served as main communicator and mediator between the citizens and the British politicians making the decisions. Sir Kai Ho was an unofficial member of the Legislative Council. Robert Hotung wanted Chinese citizens to recognize Hong Kong as their new home after the fall of China's last dynasty in 1911.[1]

Development of the Colony 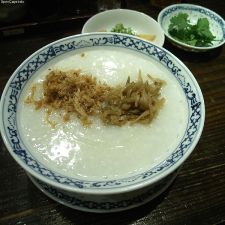 The east portion of Colonial Hong Kong was mostly dedicated to the British and was filled with race courses, parade grounds, barracks, cricket, and polo fields. The west portion was filled with Chinese shops, crowded markets, and tea houses. The Hong Kong tea culture began in this period and evolved into yum cha. One of the most common breakfasts was congee with fish and barley.

In the mid-1800s many of the merchants would sell silk and jade and consult feng shui to open shops that favored better spiritual arrangements.[2] Other lower ranked groups like coolies arrived with the notion that hard work would better position them for the future. And the success of boatmen, merchants, carters, and fishermen in Hong Kong would leapfrog China's most popular port in Canton. By 1880 Hong Kong's port would handle 27 percent of the mainland's export and 37 percent of imports.

A British traveler, Isabella Bird, described Hong Kong in the 1870s as a colony filled with comforts and entertainment only a Victorian society would be able to enjoy. Other descriptions mentioned courts, hotels, post offices, shops, city hall complexes, museums, libraries, and structures in impressive manner for the era. Many European businessmen went to Hong Kong to do business. They were referred to as tai-pans or "bigshots." One of the more notable Tai-pan hangout spot was the Hong Kong Club at Queen's Road.[3]

Except for the period of Japanese occupation during World War II, the colony remained under British governance until 1997.

End of the Colony: The Sino-British Joint Declaration, 1984

The governments of the United Kingdom and the People's Republic of China (PRC) concluded the Sino-British Joint Declaration on the Question of Hong Kong in 1984, under which the sovereignty of the leased territories, together with Hong Kong Island and Kowloon (south of Boundary Street) ceded under the Convention of Peking (1860), transferred to the PRC on July 1, 1997. Portuguese Macao was transferred at the end of 1999. Provision for the continuance of Hong Kong laws, its elected legislature (itself a late development, though established in 1843 the Legislative Council was not an elected chamber until 1991) and capitalist economy were incorporated into the "one country, two systems" policy.