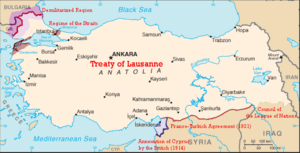 Borders of Turkey according to the Treaty of Lausanne.

The Treaty of Lausanne (July 24, 1923) was a peace treaty signed in Lausanne, Switzerland, that settled the Anatolian and East Thracian parts of the partitioning of the Ottoman Empire by annulment of the Treaty of Sèvres (1920) that had been signed by the Istanbul-based Ottoman government; as the consequence of the Turkish War of Independence between the Allies of World War I and the Ankara-based Grand National Assembly of Turkey (Turkish national movement) led by Mustafa Kemal Atatürk. The treaty also led to the international recognition of the sovereignty of the new Republic of Turkey as the successor state of the defunct Ottoman Empire.

The nation-state of Turkey, recognized by the Treaty, became the first officially secular Muslim majority state in the world. The Turkish people were able to avoid the humiliation of foreign powers dictating policy and controlling their finances, which would almost certainly have embittered relations with Europe. Instead, Turkey remains one of the strongest democracies across the Muslim world. Despite military intervention, democracy has been re-instated after each episode. In 1949, Turkey became the first Muslim majority state to recognize the state of Israel although it voted against United Nations Resolution 181 in November 1947. Turkey enjoys good relations with the Muslim world and in many respects is a cultural bridge between civilizational zones. In 1952 Turkey joined the North Atlantic Treaty Organization NATO] and is seeking membership of the European Union.

The Ottoman government had enjoyed a close relationship with Germany from the late-nineteenth century. In debt to various Western powers, only Germany continued to offer financial and technological support. From 1881, the finances of the Empire were supervised by the Ottoman Public Debt Administration appointed by the creditors.[1] From 1909 and the Young Turk Revolution, the Empire was governed by the Young Turks Committee of Union and Progress, which effectively side-lined the Sultan and promised a series of reforms to improve efficiency and prevent the further disintegration of the empire, which had lost its European territory while such provinces as Egypt and Cyprus were under British control although legally still Ottoman territories. European states also had numerous capitulations, enclaves more or less under their control so that a Turkish policeman could not even enter "the premises of a European or American without the permission of the latter's consul."[2] Weakened militarily, the Empire also faced the threat of possible "further encroachments on its territory." The most likely threat was Russia but Italy and Greece or Bulgaria were also regarded with suspicion.[3] To counter this threat, the Young Turk's realized that they needed a European ally. Britain had aided them against Russia in the Crimean War but under William Ewart Gladstone Britain's attitude towards the Empire had changed; "Claiming that the Sultan's regime was a 'bottomless pit of fraud and falsehood'" Gladstone had withdrawn British protection and influence from Constantinople."[4] Instead, Germany presented itself as protectors of the Ottoman's interests. Partly, this was because Germany and its ally, Austria-Hungary did not want to see an Emperor deposed due to the outbreak of nationalism across his empire, fearing a similar fate. Partly, an alliance with the Ottomans was strategically useful. Nonetheless, the British were approached but responded negatively. Instead, the Kaiser, Wilhelm II entered talks about a formal alliance in July 1914 and a treaty was signed on August 2, 1914.[5] It was this alliance that took the Empire into World War I on the side of Germany.

The main clashes were between Russia and the British. The latter also had support from the Arab revolutionary army. Even as hostilities continued, the anti-German allies began to map out how they would redistribute the Empire after the war. In the Sykes-Picot agreement, the French and the British carved up the Middle East between themselves and Italy.[6] Russia would have been included but was left out following the communist revolution. The Ottoman government signed an armistice on October 30, 1918. The Treaty of Sèvres was signed on August 10, 1920 but this was never ratified by the Turkish Parliament. Russia negotiated a separate treaty, the Treaty of Brest-Litovsk in 1918. With the Empire dismembered, one issue was: what status would Turkey be allowed; and another issue was the redistribution of territory. The division of the Middle Eastern provinces of the empire between the three powers was recognized; other territories went to Greece and Russia and the area which became Saudi Arabia was declared an independent state. The Treaty left the Ottoman government in place but appointed Britain, France and Italy to manage Turkey's finances and restricted the size of the army to 50,000 men.[7] Some people would be arrested for war crimes. 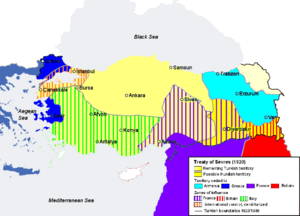 In May 1919 Mustafa Kemal Atatürk, the victor of Gallipoli was appointed by the Sultan to command what remained of the army. By July 1919, Atatürk had resigned from the army and was leading a nationalist movement against the occupying force with the intent of ending the Ottoman sultanate and founding a democratic, secular nation-state free from external interference. Many Turks were resentful of the treaty and wanted to end Ottoman governance. They saw the terms as punitive and argued that the people of Turkey were not responsible for the Ottoman's supporting Germany. In April, 1920 he formed a Grand National Assembly. War began with Greece, prompted by the territorial concessions made by Sèvres and with the French over the Syrian-Turkish border, in which Atatürk achieved a series of victories. The British, though, held their position. The Sultanate was abolished in November, 1922. Lacking the will to engage in prolonged hostilities, the Allies convened a peace conference at Lausanne in November, 1922. İsmet İnönü was the chief negotiator for Turkey. Lord Curzon, the British Foreign Secretary of that time, was the chief negotiator of the Allies, while Eleftherios Venizelos negotiated on behalf of Greece. The negotiations took many months. On November 20, 1922, the peace conference was opened, and after strenuous debate, was interrupted by Turkish protest on February 4, 1923. After reopening again on April 23, and following more protests by the Turks and tense debates, the treaty was signed on July 24 as a result of eight months of arduous negotiation. The delegation on behalf of the Allies included negotiators such as the U.S. Admiral Mark L. Bristol, who served as the United States High Commissioner and championed Turkish efforts.

The treaty was composed of 143 articles with major sections including:[8]

The treaty provided for the independence of the Republic of Turkey but also for the protection of the ethnic Greek minority in Turkey and the mainly ethnically Turkish Muslim minority in Greece. However, most of the Greek population of Turkey and the Turkish population of Greece had already been deported under the earlier Exchange of Populations between Greece and Turkey agreement signed by Greece and Turkey. Only the Greeks of Istanbul, Imbros and Tenedos were excluded (about 270,000 in Istanbul alone at that time), and the Muslim population of Western Thrace (about 86,000 in 1922). Article 14 of the treaty granted the islands of Imbros and Tenedos "special administrative organization," a right that was revoked by the Turkish government on February 17, 1926. The Republic of Turkey also formally accepted the loss of Cyprus (which was "rented" to the British Empire following the Congress of Berlin in 1878, but de jure remained an Ottoman territory until World War I) as well as Egypt and Sudan (which were occupied by British forces with the pretext of "establishing order" in 1882, but de jure remained Ottoman territories until World War I) to the British Empire. The fate of the province of Mosul was left to be determined through the League of Nations. Turkey also renounced all claims on the Dodecanese Islands, which Italy was obliged to return back to Turkey according to the agreement in 1912 (also known as the First Treaty of Lausanne (1912), as it was signed at the Ouchy Castle in Lausanne, Switzerland) following the Italo-Turkish War (1911-1912).

The treaty delimited the boundaries of Greece, Bulgaria, and Turkey; formally ceded all Turkish claims on the Dodecanese Islands (Article 15); Cyprus (Article 20); Egypt and Sudan (Article 17); Iraq and Syria (Article 3); and (along with the Treaty of Ankara) settled the boundaries of the latter two nations. Turkey also renounced its privileges in Libya which were defined by Article 10 of the Treaty of Ouchy in 1912 (per Article 22 of the Treaty of Lausanne in 1923).[9] However, the separate Kurdish territory that would have been established under Sèvres was abandoned. The treaty left the Armenian people split between the Soviet Union and Turkey, creating resentment.

Among many agreements, there was a separate agreement with the United States: the Chester concession. The U.S. Senate refused to ratify the treaty and consequently Turkey annulled the concession.[8]

The Allied troops withdrew from Turkey, officially ending the occupation, on September 23, 1923.

The nation-state of Turkey recognized by the Treaty became the first officially secular Muslim majority state in the world. The Turkish people were able to avoid the humiliation of foreign powers dictating policy and controlling their finances, which would almost certainly have embittered relations with Europe. Instead, Turkey remains one of the strongest democracies across the Muslim world. Despite military intervention, democracy has been re-instated after each episode. In 1949, Turkey became the first Muslim majority state to recognize the state of Israel although it voted against 181 Resolution in November 1947. Turkey enjoys good relations with the Muslim world and in many respects is a cultural bridge between civilizational zones. In 1952 Turkey joined NATO and is seeking membership of the European Union.

If the Allies had dealt leniently with Germany instead of imposing humiliating war reparations, one of the main causes of the Second World War would have been avoided. As it was the leaders not the people of Turkey who had prosecuted the war, so it could be argued that it was the Kaiser and his Generals—not the people—whose ambitions had led to war. In fact, says British historian John C.G. Röhl, the German government did not depend on the will of the majority and "the decision for war against the three world empires of France, Russia and Britain was taken by a tiny group of men who seem to have had hardly any idea of the shattering consequences that their decision would have for Germany, for Europe and for the World."[10]