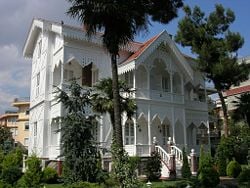 The Treaty was signed in this house of the Simeonoglou family in Yeşilköy.

The Preliminary Treaty of San Stefano was a treaty between Russia and the Ottoman Empire signed at the end of the Russo-Turkish War, 1877–78. It was signed on March 3, 1878, at San Stefano (Αγιος Στέφανος, Agios Stefanos), now Yeşilköy), a village west of Istanbul, by Count Nicholas Pavlovich Ignatiev and Alexander Nelidov on behalf of the Russian Empire and Foreign Minister Safvet Pasha and Ambassador to Germany Sadullah Bey on behalf of the Ottoman Empire. The treaty was provisional because it required the endorsement of the European powers who formed the Concert of Europe. The treaty was considered by some to be too favorable to Russia, while potentially leaving the Ottoman Empire too weak. These concerns were discussed at the Congress of Berlin (1878) which aimed to balance the various national and imperial interests. Some Bulgarian territories were returned to Turkey, reducing the size of the newly established autonomous principality of Bulgaria. However, the principality was officially recognized. March 3, the day the Treaty of San Stefano was signed, is celebrated as Liberation Day in Bulgaria.

The fact that Russia was aware that the terms of the Treaty would require ratification by the Great Powers suggests that a world system for dealing with national aspirations, with matters relating to borders and to issues of sovereignty was already developing. The Congress that followed the Treaty of San Stefano shows what states can achieve when they agree to cooperate. Russia was willing to submit to arbitration, even though it was a foregone conclusion that less favorable terms would result. Turkey, too, was willing to allow revision of the treaty, even if as the supplicant Turkey had less choice. On the one hand, the Congress subordinated the interests of the people of the Balkans to those of the Great Powers. On the other hand, the Congress and the Concert of Europe showed that senior representatives of states could meet and reach binding decisions. Russia is to be commended for actually subordinating her own interests on this occasion, indicating the direction in which the international community needs to shift. The world will remain a place where some people experience injustice caused by others' greed until nations cease to act only or almost always only to promote their self-interest at the cost of the interests of others.

Bulgaria was conquered by the Ottomans during the fourteenth century. In the early nineteenth century following the French Revolution and the new spirit of nationalism that swept through Europe, a "national awakening" began in Bulgaria. This revived memories of the pre-Ottoman Bulgarian Empire. The imperial period was represented as a highpoint of Bulgarian achievement and Bulgaria's Christian identity and heritage was also stressed. The successful Greek uprising of 1821-1829]], which led to the establishment of the modern Kingdom of Greece, encouraged Bulgarians to aspire to follow the Greek example and achieve independence. Greece was the first of Turkey's European provinces to become a sovereign, free state. This status was recognized by the Great Powers in 1832. In 1870, the Ottomans created the Exarchate of Bulgaria under Antim I, who was Exarch from 1870 to 1877. He emerged as leader of the national awakening and was soon excommunicated by the Orthodox Patriarch of Constantinople for threatening his own power and authority. The national movement, however, gathered momentum and led to a failed revolt in April 1876. Antrim presided over the Constituent Assembly and the 1st Grand National Assembly in 1879, following the Russo-Turkish War. The severe measures taken by the Ottomans to crush the revolt resulted in widespread condemnation and outrage across Europe. It was the Russians, who saw themselves as friends and allies of the Slav population in the Balkans who were provoked to respond. In April 1877, Russia declared war and the Russo-Turkish War, 1877–78 followed. A series of Russian victories ended with the liberation of most Bulgarian territories until the Ottoman Empire offered a truce on January 31, 1878. The two protagonists then met to negotiate the Treaty of San Stefano.

The treaty set up an autonomous self-governing tributary principality Bulgaria with a Christian government and the right to keep an army.[1] Its territory included the plain between the Danube and the Balkan mountain range (Stara Planina), the region of Sofia, Pirot and Vranje in the Morava valley, Northern Thrace, parts of Eastern Thrace and nearly all of Macedonia (Article 6).

A prince elected by the people, approved by the Ottoman Emperor and recognized by the Great Powers was to take the helm of the country and a council of noblemen was to draft a Constitution (Article 7). The Ottoman troops were to pull out of Bulgaria, while the Russian military occupation was to continue for two more years (Article 8).

On Serbia, Montenegro and Romania

Under the Treaty, Montenegro more than doubled its territory with former Ottoman areas, including Nikšić, Podgorica and Antivari (Article 1), and the Ottoman Empire recognized its independence (Article 2).

Serbia annexed the Moravian cities of Niš and Leskovac and became independent (Article 3).

The Porte (Ottoman Empire) recognized the independence of Romania (Article 5).

On Russia and the Ottoman Empire

In exchange for the war reparations, the Porte ceded Armenian and Georgian territories in the Caucasus to Russia, including Ardahan, Artvin, Batum, Kars, Olti, and Beyazit. Additionally, it ceded Northern Dobruja, which Russia handed to Romania in exchange for Southern Bessarabia (Article 19).

The Straits—the Bosporus and the Dardanelles—were declared open to all neutral ships in war and peacetime (Article 24). 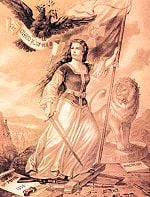 Response by the Great Powers

Russia and Austria-Hungary were rivals in the Balkans: Russia represented herself as the champion and defender of Orthodox Christians; Austria-Hungary championed and defended Catholics. Austria also feared that the treaty left the Ottoman Empire too weak, possibly precipitating the collapse of what was a large, multi-ethnic imperial state ruled by a more or less absolute sovereign. The collapse of such a state, especially if this resulted from national uprisings on the part of distinct ethnic groups claiming the right to become independent, boded ill for the equally multi-ethnic Austro-Hungarian empire.[2] Nationalism was already rife among the various nationalities of Austria-Hungary. To preside over the break-up of the Ottoman Empire, even though many in Europe detested it out of sympathy for national awakenings such as that which had resulted in Bulgarian independence would be hypocritical if Austria-Hungary did not also allow its own nationalities their freedom. On the other hand, the treaty did nothing to advance Austria-Hungary's influence in Bosnia-Herzegovinia.

Great Britain and France were not prepared to allow the whole region to deteriorate into instability and at least for the time being wanted to prop up the Ottoman Empire. Consequently, at the Berlin Congress, territory was restored as was control of shipping in the Straits because free and open access would be costly to the Ottomans, who were already financially embarrassed. Romania, which had contributed significantly to the victory in the war, was also extremely disappointed by the treaty, and the Romanian public perceived some its stipulations as Russia breaking the Russo-Romanian prewar treaties that guaranteed the integrity of Romanian territory.

The Congress of Berlin redistributed back to the Ottoman Empire certain Bulgarian territories, most notably Macedonia. Albania, and Thrace remained Ottoman. It formally recognized independence of the de facto sovereign states of Romania, Serbia, and Montenegro but placed Bosnia and Herzegovina under Austria-Hungary. Cyprus was ceded to the British (who had already seized it). The Congress also set in motion steps to take control of Ottoman finances to repay debts owed to European bankers. To pay for the Crimean War, the Sultan had taken out large loans from European Banks. In 1875, he had defaulted on payment. Loans now "stood at more than 200 million pounds sterling."[3] 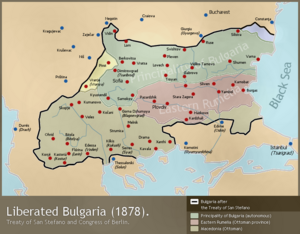 Borders of Bulgaria according to the Treaty of San Stefano.

Although the Congress radically altered the terms of the Treaty of San Stefana, the result was still the end of Ottoman dominance in the Balkans and the almost complete end of an Ottoman presence in Europe.[4] Stripped of almost all European territory, Turkey would no longer be viewed as part of Europe. In their future dealings with Turkey, the Great Powers regarded this as part of their Middle East agenda. Russia's awareness that the very favorable terms it had successfully negotiated at San Stefano would require international, or at least pan-European ratification, shows that a world system for dealing with national aspirations, matters relating to borders and to issues of sovereignty was already developing. The idea that a body such as the Concert of Europe that could bring senior representatives of nation-states together and enable cooperation fed into the formation of the League of Nations and of its successor, the United Nation. On the other hand, both Russia at Stan Sefano and the Great Powers at the Berlin Congress subordinated the interests of the people Balkans to their own. Russia, though, in allowing the Treaty to be ratified at the Congress, knew that less favorable terms would result. On this occasion, Russia is to be commended for surrendering a favorable bi-lateral treaty for a much less attractive multilateral treaty. This indicated the direction in which the international community needs to shift. Involving more stake holders than had San Stefano, the Congress, which was not totally indifferent towards peoples' national aspirations, at least tried to balance different and competing interests. Real progress will be achieved when the world shifts towards becoming a fairer, more just place for all people. This will occur when nations begin to consider the interests of humanity as a whole, of which their own interests are part, ceasing to act only or almost always only in ways that promote their self-interest at the cost of the interests of others.

Retrieved from https://www.newworldencyclopedia.org/p/index.php?title=Treaty_of_San_Stefano&oldid=1085709
Categories:
Hidden category:
This page was last edited on 5 November 2022, at 04:52.
Content is available under Creative Commons Attribution/Share-Alike License; additional terms may apply. See Terms of Use for details.