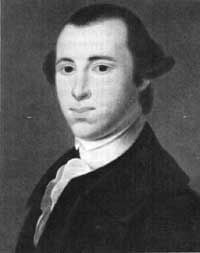 Thomas Heyward, Jr. (July 28, 1746 – March 6, 1809), was a signer of the United States Declaration of Independence, a Revolutionary War officer, and a post-war judge for the state of South Carolina.

He served in the last four Royal Assemblies in the colony and in its first eight General Assemblies.

He was born to Daniel Heyward and Maria Miles at Old House Plantation in St. Helena Parish, which later became St. Luke's Parish, South Carolina. He was the eldest of three sons. The others were Daniel and William. Since an uncle named Thomas was living, the younger Thomas Heyward added "Jr." to his name, which was the custom of the times. His father was one of the wealthiest rice planters of his day.[2] He gave his son lands on the Combahee River in St. Helena Parish which he settled as White Hall plantation.[3] He was educated at home, then traveled to England to study law at the Middle Temple in 1765.

In 1772 Heyward was elected to the South Carolina Commons House of Assembly, where he served until 1775 when Lord William Campbell, the last Royal governor, dissolved the assembly and fled the province.

Just prior to the Assembly being dissolved the blockading of the Boston port reached Charles Town and a convention was called in 1774 and Heyward was a delegate to that convention. Heyward took an active role in opposition to British rule and served on the Committee of Ninety-Nine in 1774, which called for the formation of the First Provincial Congress the following year. (SC Encyclopedia)

The General Committee ordered an election and Heyward was elected to the First Provincial Congress that met in January 1775. At the second session of this congress, in June 1775, Heyward was one of 13 elected to the Safety Council, which took over the government of South Carolina after Lord Campbell fled.

In August 1775 he was elected to the Second Provincial Congress. At the second session of this Congress in February 1776 Heyward was appointed to a committee of eleven whose task was to prepare a constitution for South Carolina. The Constitution was adopted on March 26, 1776, and the congress resolved itself into the state's first general assembly to which Heyward was again elected.

As a judge of the Court of General Sessions and Common Pleas (1779-1789) he helped establish educational standards for the South Carolina Bar.[3]

He would go on to serve in the state General Assembly until 1790.

Heyward, Jr. was a member of the militia of the state and captain of a battalion of artillery in Charleston. He and his battalion participated in William Moultrie's defeat of the British in 1779 at the Battle of Beaufort on Port Royal Island. He was wounded in the battle.

He also took part in the defense of Charleston but was captured and imprisoned in 1780. Later he was sent to a prison in St. Augustine, Florida where he was held until 1781 when he was freed as part of a prisoner exchange.[2]

While in prison Heyward became famous among his fellow prisoners for celebrating July 4th by rewriting the famous British anthem God Save the King. He change the words and lead everyone in singing, God Save The Thirteen States, Thirteen United States, God Save Them All. It became a hymn as it was a prayer to God to bless the thirteen colonies in their fight for independence.[4]

He was one of the founders of the Agricultural Society of South Carolina (ASSC) in 1785 and was its first president. The ASSC was responsible for getting Andre Michaux, the famous French botanist, to come to South Carolina who helped introduce new agricultural products.[2]

Heyward was a very public minded man who also held the office of vestryman at St. Michael's Parish, held many different commissioner positions, was a warden of Charleston's Sixth Ward, and a trustee of the College of Charleston.[3]

Heyward was married twice. His first wife was Elizabeth Mathews, the daughter of John Mathews, and sister of Governor John Mathews (1782-1783). They had five children but only their son Daniel survived childhood. Elizabeth died in Philadelphia in 1782, where she had gone to meet him after his release as a prisoner of the British.

In 1786 he married Elizabeth Savage, daughter of Thomas Savage, owner of the Silk Hope Plantation near Savannah, Georgia. They had three children: Thomas, James Hamilton, and Elizabeth.[3]

He devoted most of his remaining days, except for attendance in 1790 at the State constitutional convention, to managing his plantation; he sold his Charleston townhouse in 1794. The last to survive among the South Carolina signers, he died in 1809 at the age of 62 and was interred in the family cemetery at Old House Plantation.[1] 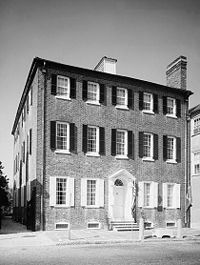 In 1920 the South Carolina General Assembly appropriated money to have a monument erected over his grave at Old House Plantation, which is now on the National Register of properties in South Carolina.[5][6] In 1955 the Beaufort County Historical Society erected an iron sign at the entrance to the gravesite.

Heyward's home in Charleston is now a National Historic Landmark. The house at 87 Church Street was built in 1772 by his father. In 1791, when President George Washington made a grand tour of the new nation and included Charleston on his itinerary, the city rented Heyward's house for Washington.[7]

In 1979 a statue was placed by the Thomas Heyward, Jr. Chapter, National Society, Daughters of the American Revolution at the Charles Street entrance to the Henry C. Chambers Waterfront Park, in Beaufort, S.C.[8]