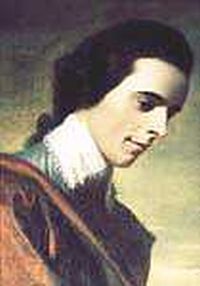 Arthur Middleton (June 26, 1742 - January 1, 1787) was one of the four signers of the Declaration of Independence from South Carolina.

The son of Henry Middleton, one of South Carolina's representatives in the First Continental Congress and its President in 1774, Arthur also became a political leader in the colony starting in 1764 when he was first elected to the Commons House of Assembly. He succeeded his father as a delegate to the Continental Congress in 1776.

In 1776, he was also part of an 11 man committee that prepared a constitution for the new state and was a co-designer of the state seal. He was chosen Governor of the state in 1778 but declined to take the position.

He was educated in Britain, at Westminster School, London, and St. John's College, Cambridge University. He studied law at the Middle Temple and traveled extensively in Europe where his taste in literature, music, and art was developed.

He returned to South Carolina in December of 1763 and by 1765 he was elected to the Commons House of Assembly from both St. James parish and St. Helena parish. His interest in Carolina politics Arthur led him to become a leader of the American Party in Carolina.

In 1764, Arthur married Mary Izard and settled at Middleton Place.

He served for three years and then took his new wife to Europe, where they traveled for three years. Their son Henry was born in London during their travels. Also while in London, the family's portrait was painted by Benjamin West.

Upon returning to Charles Town in 1771, he resumed his political life by serving in the provincial House of Commons from 1772-1775 and attending the provincial conventions in 1774 and 1775.

In April 1775, two days before the Battle of Lexington, he became a member of a secret committee whose task was to prepare the colony to defend itself. This committee made sure the store of arms and ammunition was safely secured for the use of patriots. In June he became a member of the Council of Safety, which organized a military force, commissioned officers and performed other Executive functions until an independent government was established.

While serving on the Council of Safety Middleton advocated the extreme position of seizing the newly arrived Royal Governor, Lord Campbell, who, as it turned out, was stringing the Revolutionary party along until troops could be sent to crush them.[1]

During this time Middleton contributed many political essays on the issues at hand and signed them "Andrew Marvel."

In 1776, he became a delegate to the provincial congress which formed a state constitution. Within a few days of being named to the constitution committee he was elected to succeed his father in the Continental Congress and subsequently was a signer of the Declaration of Independence, along with Thomas Lynch, Jr., Edward Rutledge, and Thomas Heyward, Jr. Also in 1776, he and William Henry Drayton designed the Great Seal Of South Carolina.

In the spring of 1778, the Assembly of South Carolina created a new constitution that differed in many important points from the one that Middleton helped create in 1776. When it was presented to governor John Rutledge he refused to accept it and resigned. In a secret ballot Middleton was elected to the office by a considerable majority. He declined the appointment because he did not support the new constitution either.[2]

During the American Revolutionary War, Arthur served in the defense of Charleston. After the city's fall to the British in 1780, he was sent as a prisoner of war to St. Augustine, Florida (along with Edward Rutledge and Thomas Heyward, Jr.), until exchanged in July of the following year.

After retuning to the Congress he submitted a resolution stating:

He advocated that Cornwallis not be considered, ever, for any exchange of prisoners.[3]

Arthur died on January 1, 1787, at the age of 44. He was buried in the family tomb in the Gardens at Middleton Place.

Williams Middleton, his grandson, while living at Middleton place became active in the politics of his day. He supported the idea of "states rights" and signed the Ordinance of Secession that separated South Carolina from the Union.

His birth place and burial place is now a National Historic Landmark. The eighteenth century plantation has been preserved and in 1941 the Garden Club of America awarded Middleton Place the Bulkley Medal "in commemoration of 200 years of enduring beauty." The Garden Club also declared Middleton Place to have "the most important and interesting garden in America."[4]

In 1937, when workmen were preparing to pull down an old barn a trunk with Middleton's clothes was found buried underneath a pile of straw behind a horse trough. The leather covered brass-studded trunk had a smaller trunk in it and two coats, two pairs of breeches and five vests wrapped in a heavy sheet. Marked on the sheet were the words, "Clothes of Arthur Middleton." Both trunks were practically air tight and almost perfectly preserved. It is speculated that he might have worn some of these very clothes when signing the Declaration of Independence as they were authentic late eighteenth century styles.[5]

The portrait of his family done by Benjamin West was returned to the Middleton Place House Museum in 1975 and in 1976 it was displayed at the National Portrait Gallery in Washington, D.C. for a Bicentennial exhibition.

In 2006, a Middleton reunion was held at the plantation and for the first time descendants of Middleton slaves were invited.

The United States Navy ship, USS Arthur Middleton (AP-55/APA-25), was named for him.

Retrieved from https://www.newworldencyclopedia.org/p/index.php?title=Arthur_Middleton&oldid=1059919
Categories:
Hidden category:
This page was last edited on 7 November 2021, at 12:22.
Content is available under Creative Commons Attribution/Share-Alike License; additional terms may apply. See Terms of Use for details.