The Mountain (French: La Montagne) was a political group during the French Revolution. Its members, called the Montagnards (French pronunciation: [mɔ̃taɲaʁ]), sat on the highest benches in the National Convention. They were the most radical group of delegates, opposed to the Girondins faction. The term, first used during a session of the Legislative Assembly, came into general use in 1793.

The Mountain was composed mainly of members of the middle class, but represented the constituencies of Paris and allied with the Paris Commune. As such, the Mountain was sensitive to the motivations of the city and responded strongly to demands from the working poor of the city, the sans-culottes. The Mountain operated on the belief that what was best for Paris would be best for all of France, while the Girondins generally were supported by the provinces outside Paris.

During the period of the Legislative Assembly (October 1791-Seotenber 1792), the Girondins were the political faction that emerged as the leaders of the government. They were promoters of republicanism, while serving in important ministerial positions in the government. The Mountain emerged in 1792, with the merger of two prominent left-wing clubs: the Jacobins and Cordeliers. The Clubs played an important political role. The nightly sessions of the Jacobin club, which met in the rue Saint-Honoré, can be considered to be a type of caucus for the Mountain.[8] The Jacobins were initially moderate republicans and the Cordeliers were the more radical populists.

Though members of the Montagnards were known for their commitment to radical political resolutions prior to 1793, the contours of political groups presented an ever-evolving reality that shifted in response to events. Would-be prominent Montagnard leaders like Jean-Baptiste Robert Lindet and Jean Bon Saint-André were interested in early Girondin proposals but soon many moderates—even anti-radicals—felt the need to push for more radical positions in light of threats of rebellion that emerged both within the country and without.[9]

After the Insurrection of 10 August 1792 the Legislative Assembly was replaced by the National Convention. Three questions dominated the first months of the Convention, revolutionary violence, the trial of the king and the Parisian dominance of politics.

One of the main differences between the Mountain and the Girondins was their constituencies. The term Girondin was coined to reflect that some of the leaders of this faction were from the Gironde. Antagonism between Paris and the provinces created friction among the people that served as a propaganda tool and combat weapon for the two groups. The departments resisted the idea of centralization. They saw the idea as symbolized by the desire to reduce the capital of the Revolution to a minuscule share of influence. Much of the Gironde wished to remove the Assembly from a city dominated by "agitators and flatterers of the people" but did not yet encourage an aggressive federalism, which would have run counter to its political ambitions.[10]

Trial of the King 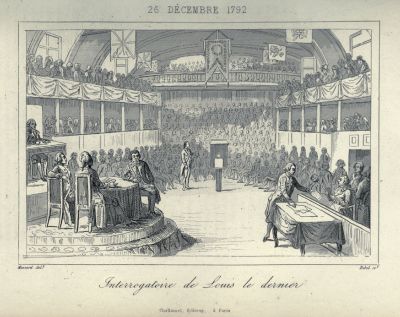 The trial of Louis XVI

It was the trial of Louis XVI in December 1792 which united the Montagnards on a position of regicide and precipitated their rise. The rise of Montagnards correlates to the fall of the Girondins. The Girondins, who advocated for a republican government, nonetheless hesitated on the question of the execution of King Louis XVI after his attempt to flee France on June 20, 1791. Some of the Girondins believed they could use the king as figurehead. While the Girondins hesitated, the Montagnards took a united stand during the trial in December 1792–January 1793 and favored the king's execution.[12]

The Montagnards made an ideological argument. Louis XVI was classified as an enemy, who was alien to the body of the nation and as a "usurper." Balloting began on January 15, 1793. The vote against the king's removal was unanimous. There was to be no popular referendum, as the Girondins had hoped. The fatal vote started on January 16, and continued until the next day. Of the 726 deputies present, 361 declared themselves for the death penalty without condition, 26 voted for death on condition that the Mailhe amendment be adopted, 334 were opposed (including 44 who voted for death with reprieve), 5 abstained or recused. On January 19, the question of reprieve was put to a vote: 380 votes were cast against and 310 for (2 voted on condition, 10 abstained or recused). Each time, the Montagnards were unified in favor of death but the Girondins had split.[13] 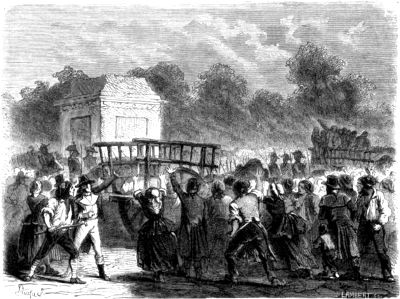 Execution of the Girondins, woodcut from 1862

After the king's execution in January 1793, the Montagnards sought to discredit their political rivals, the Girondins. The Girondins were convinced that their opponents aspired to a bloody dictatorship, but the Montagnards believed that the Girondins were ready for any compromise with conservatives and even royalists to guarantee remaining in power. They used tactics previously employed by the Girondins to denounce them as liars and enemies of the Revolution.[14] The bitter enmity soon reduced the Convention to a stalemate, as each side hurled accusations of treason at the other. Debate after debate degenerated into verbal brawling. The political deadlock, which had repercussions all over France, eventually drove men to accept dangerous allies: royalists in the case of Girondins, sans-culottes in that of the Montagnards.[15] They formed a legislative committee in which Nicolas Hentz proposed a limitation of inheritances, gaining more support for the Montagnards.

Girondin members were subsequently banned from the Jacobin club. In June 1793, the Mountain successfully ousted most of the Girondin members of the Convention with the assistance of radical sans-culottes.[16][17] On October 31 nearly two dozen Girondins leaders were guillotined.

Following their coup, the Mountain, led by Hérault de Séchelles, quickly began construction on a new constitution, which was completed eight days later.[18] The Committee of Public Safety reported the constitution to the Convention on June 10 and a final draft was adopted on June 24. The process occurred quickly because as Robespierre announced on June 10 the "good citizens demanded a constitution" and the "Constitution will be the reply of patriotic deputies, for it is the work of the Mountain."[19] However, this constitution was never actually enacted.[20] The Constitution of 1793 was delayed due to the situation in the war, and finally, after the Thermidorian Reaction that purged much of the government, it was abandoned.[21]

Policies of the Mountain

In August 1793, Montagnard member Jean Jacques Régis de Cambacérès drafted a piece of legislation which dealt with agricultural reform. He urged "relief from rent following harvest loss, compensation for improvements and fixity of tenure."[22] This was in part to combat restlessness of share-croppers in the southwest. This draft never made it into law, but the drastic reforms suggest the Mountain's awareness of the needs of their base of support, both the rural and urban poor.[22]Although they attempted some rural land reform, most of it was never enacted and they generally focused on the needs of the urban poor over that of rural France.[23] 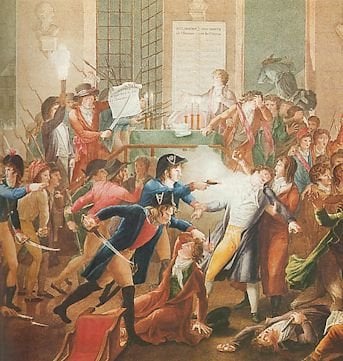 The arrest of Maximilien Robespierre and his allies showing at the centre of the image gendarme Merda firing at Robespierre (colour engraving by Jean-Joseph-François Tassaert after the painting by Fulchran-Jean Harriet, Carnavalet Museum)

Other policies aimed at supporting the poor included price controls enacted by the Mountain in 1793. This law, called the General Maximum, was supported by a group of agitators within the Mountain known as the Enragés. The Hébertists also supported the Law of the Maximum, favoring direct intervention of the state in economic affairs with the goal of ensuring the adequate supply of commodities, advocating the national requisition of wine and grain.[24]

It fixed prices and wages throughout France. The result of the General Maximum were largely negative as it led to a decrease in food supply as producers withheld their crops from the market. It actually exacerbated the problem.[25] Bread prices rose as the commodity became scarce, and in an initiative spearheaded by Collot d'Herbois and Billaud-Varenne, a law was enacted in July 1793 that forbade the hoarding of "daily necessities."[26] The hoarding of grain became a crime punishable by death.[27]

Other economic policies enacted by the Mountain included an embargo on the export of French goods. In theory, this protected French markets from foreign goods and required French people to support French goods. As a result of this embargo, France was essentially unable to trade with foreign markets and the import of goods effectively ended.[28] In addition to the embargo against foreign goods, Act 1651, passed by the Mountain in October 1793, further isolated France from the rest of Europe by forbidding any foreign vessels from trading along the French coast.[29]

The Mountain also enacted policies restricting and granting religious freedom. These policies varied but began with a ban on religion, promoting instead "the worship of Reason" in 1793 and progressing to religious freedom with the separation of Church and State in 1795.[30] 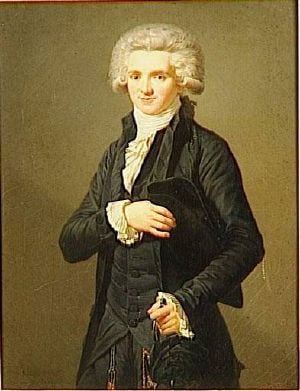 Portrait of Robespierre by Adelaide Labille-Guiard (1786)

Despite their unity in the trial and execution of the King and their political opponents, internal rivalries would soon tear them apart. Their leaders, like Maximilien Robespierre, Georges Danton and Jacques Hébert, represented different factions.[31] Hébert, a journalist, was the publisher of the radical newspaper, ''Le Père Duchesne, which had especially targeted the Queen, Marie Antoinette. He was a leader of the sans-culottes and promoted the radical [[anticlerical movement]]. They created the Festival of Reason to replace religion, but gained the scorn of Robespierre, who was not an atheist. Robespierre would later counter with his own festival, the Festival of the Supreme Being. Hébert's followers were known as the Hébertists. The Hébertists and sans-culottes would later play a significant role in carrying out the Terror.

Danton led a more pragmatic faction of the Mountain (followers came to be known as Dantonists).[32] In late 1792, after the trial of Girondins in 1793, Danton became concerned about the direction of the revolution and attempted to moderate the revolutionary violence, while Robespierre continued his authoritarian policies. The moderates of Danton were also rival to the followers of Jacques Hébert who wanted the persecution of all non-Montagnards and the dechristianization of France. Danton, like Robespierre had little respect for the buffoonish Hébert.

As Robespierre moved to consolidate his power, he turned on some of his erstwhile allies. Robespierre eliminated first the Hébertists (March 1794) and then the Dantonistes (April 1794). Robespierre and his Committee of Public Safety overextended themselves with their tight control over the military and their extreme opposition to corruption in the government.[33]His faction now ruled The Mountain.

These purges had taken a toll on the Convention. Their overextension drew the ire of other revolutionary leaders, who now feared for their own lives. With another purge in the works, several members of the Convention, supported by The Plain, instituted a coup d'état. A number of plots coalesced on 9 Thermidor (Thermidorian Reaction) and Robespierre was arrested and executed. With the execution of Robespierre, the Montagnards that survived were arrested, executed or deported. The Jacobin Club was closed. By 1795 the Mountain had effectively been obliterated and the revolutionary phase came to a close.