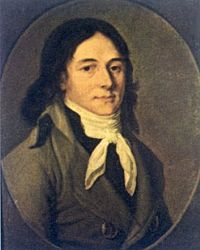 Lucie Simplice Camille Benoist Desmoulins (March 2, 1760 – April 5, 1794) was a French journalist and politician who played an important role in the French Revolution. He was closely associated with Georges Danton, rising to prominence with Danton and in the end sharing his fate. He is noted for his justification of revolutionary violence which in the end would also claim his own life.

Desmoulins was born at Guise, in Picardy. His father was lieutenant-general of the bailliage of Guise, and through the efforts of a friend obtained a scholarship for his son at the Collège Louis-le-Grand in Paris. Entering the school, which Maximilien Robespierre and Louis-Marie Stanislas Fréron also attended at the time, at 14, Desmoulins was an accomplished student. Destined by his father for the law, he was admitted as a lawyer of the parlement of Paris in 1785. However, he did not do well, as he had a violent manner and a serious stammer. This prompted him to turn towards writing. His interest in public affairs led him to a career in politics.

In March 1789, Desmoulins was nominated deputy from the bailliage of Guise. He came to Laon as a commissioner for the election of deputies to the Estates-General. Desmoulins heralded this with an Ode to the States-General. Moreover, he almost certainly wrote a radical pamphlet entitled La Philosophie au peuple français, published in 1788, the text of which has been lost.

On December 29, 1790, Desmoulins married Lucile Duplessis, and among the witnesses were Brissot, Jérôme Pétion de Villeneuve, and Robespierre. Their only child, Horace Camille, was born on July 6, 1792. Horace was pensioned by the French government, and died in Haiti in 1825.

Lucile was arrested a few days after her husband, and condemned to the guillotine on the basis of false charges. She displayed coolness and courage on the day of her death (April 13, 1794).

Because of his lack of success at the law, he was living in Paris in extreme poverty. However, he showed enthusiasm for the political changes announced by the meeting of the Estates-General. According to his letters to his father, he watched with excitement the procession of deputies at the Palace of Versailles, and with indignation the events following the closing of the Salle des Menus to the deputies who had named themselves the National Assembly–leading to the Tennis Court Oath. This was the first indication of Desmoulins' sympathy with the sans-culottes.

The sudden dismissal of Jacques Necker by King Louis XVI brought fame to Desmoulins. On July 12, 1789, he leapt on a table outside one of the cafés in the garden of the Palais Royal, and announced to the crowd the dismissal of the reformer. Apparently losing his stammer due to the excitement, he addressed the passions of the public, calling "To arms!" and adding:

"This dismissal is the tocsin of the St. Bartholomew of the patriots" (meaning that a massacre of the partisans of reform was under preparation).

Finally, after drawing two pistols from under his coat, he declared that he would not fall alive into the hands of the police who were watching his movements. He descended, embraced by the crowd.

This was the actual beginning of the Revolution. Following Desmoulins, riots started throughout Paris. The mob, procuring arms by force on July 13, was partly organized as the Parisian militia, which was afterwards to be the National Guard. On July 14, the storming of the Bastille occurred.

The following day, Desmoulins began the most publicized phase of his writing career. In May and June 1789, he had written La France libre, which his publisher had refused to print. The taking of the Bastille, however, was a sign of changing times, and, on July 18, Desmoulins's work was issued. Considerably in advance of public opinion, it already favored a republic, and through its elaborate examination of the rights of king, of nobles, of Roman Catholic clergy and of the people, it became instantly popular, securing Desmoulins a partnership with Honoré Mirabeau. It was immediately followed by a slander campaign from Royalist pamphleteers.

Exhilarated, he appealed to the lower orders by printing his Discours de la lanterne aux Parisiens which began with a quotation from the Gospel of John, Qui male agit odit lucem ("He that does evil hates light" John 3:20). Consequently, Desmoulins was dubbed "Procureur-général de la lanterne" ("The Lanterne Prosecutor"). In this pamphlet, he argued that revolutionary violence was justified.

In November 1789, he began a career as a journalist with the first number of a weekly publication, Histoire des Révolutions de France et de Brabant, which ceased at the end of July 1791. The publication was extremely popular from its first to its last number; Camille became famous and was no longer poor. The Histoire des Révolutions is a measure of the ideas in circulation in revolutionary Paris, but it has drawn criticism for its extremely violent tone.

Desmoulins was influenced by the theorists of the Revolution; for some time before the death of Mirabeau in April 1791, he had begun his collaboration with Georges Danton (his associate for the rest of their lives). In July 1791, he appeared before the Paris Commune—the local government of Paris—as head of a group petitioning to depose the king. At the time, under the constitutional monarchy, such a request was dangerous; the gesture enhanced agitation in the city, and the frequent attacks to which Desmoulins had often been subject were followed by a warrant for the arrest of himself and Danton.

Danton briefly left Paris, while Desmoulins chose to remain and even to make occasional appearances at the Jacobin Club. Upon the failure of this attempt to arrest him, Desmoulins published a pamphlet, Jean Pierre Brissot démasqué, which contained violent attacks. It originated in a conflict between the two, and was followed in 1793 by a Fragment de l'histoire secrète de la Révolution (more usually known by the name Histoire des Brissotins), in which the Girondists, and especially Brissot, were subjected to a populist attack.

National Convention and clash with Robespierre

Desmoulins took an active part in the August 10 attack on the Tuileries Palace. Immediately afterwards, as the Legislative Assembly (France) crumbled and various factions and bodies contended for effective power over the country, he became secretary to Danton in the latter's role as the new Justice Minister. On September 8, he was elected a deputy for Paris to the new National Convention, where he remained largely in the background, remaining better known as a journalist. He was affiliated with The Mountain, and voted for the Republic and the execution of the king. Desmoulins became close to Robespierre, and the Fragment de l'histoire secrète de la Révolution was very likely inspired by the latter. The success of the pamphlet did much to install the Reign of Terror and condemn the Girondin leaders to the guillotine. This proved alarming to both Danton and its author.

In December 1793, the first number of the Vieux Cordelier was issued. At first it was directed against the Hébertists (and was approved of by Robespierre), but the third number supported Danton's idea of a Committee of clemency, which earned them Robespierre's epithet les indulgents. This caused Robespierre to turn against Desmoulins, who took advantage of the popular indignation roused against the Hébertists to send them to death. Robespierre and Louis de Saint-Just then turned their attention to both the enragés (Jacques Roux's faction) and the indulgents.

On January 7, 1794, Robespierre, who on a former occasion had defended Danton and Desmoulins in the National Convention, urged the burning of certain numbers of the Vieux Cordelier in a speech at the Jacobin Club (though he did not at this time condemn Desmoulins or Danton as individuals). Desmoulins replied using a quote from Jean-Jacques Rousseau (who was widely perceived as the intellectual authority for all revolutionary gestures): "burning is not answering." The implied insult led to a bitter conflict. By the end of March, the Hébertists had been guillotined, while Danton, Desmoulins and other leaders of the moderates were placed under arrest.

On March 31, the arrest warrant was signed and executed, and on the third, fourth, and fifth of April the trial took place before the Revolutionary Tribunal. When asked his age, Desmoulins replied:

"I am thirty-three, the age of the "sans-culotte" Jesus, a critical age for every patriot" (this was false; he was in fact thirty-four).

The accused were prevented from defending themselves by a decree of the Convention. This, together with the false report of a spy (who charged Desmoulins' wife with conspiring in her husband's escape and plotting the "ruin of the Republic"), obtained for prosecutor Antoine Quentin Fouquier-Tinville a death sentence after threatening the jury. The verdict was passed in the accuseds' absence, and their execution was scheduled for the same day.

Desmoulins struggled before his death, allegedly tearing his clothes to shreds. Of the group of 15 guillotined together (also including Marie Jean Hérault de Séchelles, François Joseph Westermann and Pierre Philippeaux), Desmoulins died third, and Danton last.

The legacy of Camille Desmoulins is both in the arena of politics and journalism, and his mixture of the two. He was one of the important pamphleteers who emerged from the Revolutionary period. As a member of the fourth estate (a term referring to the press that derived from this era) Desmoulins and his cohorts helped to shape the role of the press in modern societies. His active engagement in politics also helped to create the role for the activist press as it exists in modern society.