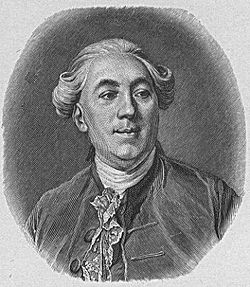 Jacques Necker (September 30, 1732 – April 9, 1804) was a French statesman of Swiss origin and finance minister of King Louis XVI. Jacques Necker is said by some to have provoked the French Revolution when he convened the ancient French Assembly only to ask for money. He was out of touch with the spirit of the age, which no longer tolerated the absolute power of the king. The people wanted a greater say in their own governance. However, the noble aims of the French Revolution would be betrayed, and a tendency towards totalitarianism developed.

The biography of Necker is part of the history of the French Revolution. He was at first regarded as the savior of France, but his conduct at the meeting of the estates-general showed that he regarded it as an assembly which should merely grant money, not organize reforms. Believing that he could save France alone, he refused to act with Mirabeau or Lafayette. Financially, he proved equally incapable for a time of crisis, and could not understand the need of such extreme measures as the establishment of assignats (defined as any of the notes issued as paper currency in France (1789-1796) by the revolutionary government and secured by confiscated lands) in order to keep the country at peace.

Necker was born in Geneva, Switzerland. His father was a native of Küstrin in Neumark (Prussia, now Kostrzyn nad Odrą, Poland), and had, after the publication of some works on international law, been elected as professor of public law at Geneva, of which he became a citizen. Jacques Necker was sent to Paris in 1747, to become a clerk in the bank of Isaac Vernet, a friend of his father. By 1762, he was a partner and by 1765, through successful speculations, had become a very wealthy man. He soon afterwards established, with another Genevese, the famous bank of Thellusson, Necker et Cie. Pierre Thellusson superintended the bank in London (his son was made a peer as Baron Rendlesham), while Necker was managing partner in Paris. Both partners became very rich by loans to the treasury and speculations in grain.

In 1763, Necker fell in love with Madame de Verménou, the widow of a French officer. But while on a visit to Geneva, Madame de Verménou met Suzanne Curchod, the daughter of a pastor near Lausanne, to whom Edward Gibbon had been engaged, and brought her back as her companion to Paris in 1764. There, Necker, transferring his love from the widow to the poor Swiss girl, married Suzanne before the end of the year. On April 22, 1766, they had a daughter, Anne Louise Germaine Necker, who became a renowned author under the name of Madame de Staël.

Madame Necker encouraged her husband to try to find himself a public position. He accordingly became a syndic, or director, of the French East India Company, around which a fierce political debate revolved in the 1760s, between the company's directors and shareholders and the royal ministry over the administration and the company's autonomy. "The ministry, concerned with the financial stability of the company, employed the abbé Morellet to shift the debate from the rights of the shareholders to the advantages of commercial liberty over the company’s privileged trading monopoly."[1]

After showing his financial ability in its management, Necker defended the Company's autonomy in an able memoir[2] against the attacks of André Morellet in 1769.

Meanwhile, he had made loans to the French government, and was appointed resident at Paris by the republic of Geneva. Madame Necker entertained the leaders of the political, financial, and literary worlds of Paris, and her Friday salon became as greatly frequented as the Mondays of Mme Geoffrin, or the Tuesdays of Mme Helvétius. In 1773, Necker won the prize of the Académie Française for a defense of state corporatism framed as a eulogy of Louis XIV's minister, Colbert; in 1775, he published his Essai sur la législation et le commerce des grains, in which he attacked the free-trade policy of Turgot. His wife now believed he could get into office as a great financier, and made him give up his share in the bank, which he transferred to his brother Louis.

In October 1776, Necker was made Finance Minister of France in spite of his Protestant faith, though with the title only of director of the treasury, which, however, he changed in 1777 for that of director-general of the finances. He did great good and gained popularity in regulating the finances by attempting to divide the taille or poll tax more equally, by abolishing the vingtième d'industrie, and establishing monts de piété (establishments for loaning money on security). But his greatest financial measures were his attempt to fund the French debt and his establishment of annuities under the guarantee of the state. The operation of funding was too difficult to be suddenly accomplished, and Necker rather pointed out the right line to be followed than completed the operation. In all this, he treated French finance rather as a banker than as a profound political economist, and thus fell far short of Turgot, who was the greatest economist of his day. His popular policy of borrowing rather than raising taxes to finance state expenditures burdened by the American war moved France closer to bankruptcy.

Politically, he did not do much to stave off the coming French Revolution, and his establishment of provincial assemblies was only a timid application of Turgot's far-reaching scheme for the fundamental administrative reorganization of France. In 1781, he published his famous Compte rendu (full name compte rendu du roi), in which he drew up a rosy balance sheet of France, and was soon dismissed from his office, due to the influence of Marie Antoinette, whose schemes for benefiting the duc de Guînes he had thwarted, among other half-measures of economy.

In retirement, he occupied himself with literature, producing his famous Traité de l'administration des finances de la France (1784) and with his only child, his beloved daughter, who in 1786, married the ambassador of Sweden and became Madame de Staël. But neither Necker nor his wife cared to remain out of office, and in 1787, Necker was banished by lettre de cachet 40 leagues from Paris for his very public exchange of pamphlets and memoirs attacking his successor as minister of finance, Calonne. As France's finances unraveled, in 1788 the country, which had at the bidding of the literary guests of Madame Necker had come to believe that Necker was the only minister who could "stop the deficit," as they said, demanded Necker's recall, and he became once more director-general of finance.

Necker in the Revolution

Throughout the momentous months which followed, the biography of Necker is part of the history of the French Revolution. Necker put a stop to the rebellion in the Dauphiné by legalizing its assembly, and then set to work to arrange for the summons of the Estates-General of 1789. He was at first regarded as the savior of France, but his conduct at the meeting of the estates-general showed that he regarded it as an assembly which should merely grant money, not organize reforms. But as he had advised the calling of the estates-general and the double representation of the third estate, and then had permitted the orders to deliberate and vote in common, he was regarded as the cause of the Revolution by the court, and on July 11, was ordered to leave France at once. He had earned the enmity of many members of the royal circle—including the king's youngest brother the comte d'Artois and a well-connected diplomat, baron de Breteuil (who replaced him as minister).

Necker's dismissal on July 14, 1789, brought about the storming of the Bastille, which induced the king to recall him. He was received with joy in every city he traversed, but at Paris, he again proved to be no statesman. Believing that he could save France alone, he refused to act with Mirabeau or Lafayette. He caused the king's acceptance of the suspensive veto, by which he sacrificed his chief prerogative in September, and destroyed all chance of a strong executive by contriving the decree of November 7, by which the ministry might not be chosen from the assembly. Financially he proved equally incapable for a time of crisis, and could not understand the need of such extreme measures as the establishment of assignats in order to keep the country at peace.

His popularity vanished when his only idea was to ask the assembly for new loans. In September 1790, he resigned his office.

Not without difficulty, he reached Coppet Commugny, near Geneva, an estate he had bought in 1784. Here he occupied himself with literature, but Madame Necker pined for her Paris salon and died soon after. He continued to live on at Coppet, under the care of his daughter, Madame de Staël, and his niece, Madame Necker de Saussure, but his time was past, and his books had no political influence. A momentary excitement was caused by the advance of the French armies in 1798, when he burnt most of his political papers. He died at Coppet on April 9, 1804.

The French and the American revolutions have often been compared. Both revolutions threw off absolutist governments. Both stressed, in their rhetoric, liberty and equality. Both determined to build egalitarian societies. However, while the American constitutional convention produced a document, the United States Constitution around which the young nation gathered, and which has endured, the French Constitutional Assembly failed. A dozen different French constitutions were adopted at various stages over the course of the Revolutionary period none of which survived into the modern period, while the twentieth century saw four French constitutions. France was an ally of the freedom-loving nations in two world wars but was also occupied in both of these wars. From the perspective of a providential understanding of history, perhaps this was because as a nation, France emerged as a mainly secular state with a tradition that hinders the ability of acting as moral force.

Jacques Necker was unable to make a united effort with Mirabeau or Marquis de La Fayette, although both men tried to work with him to save the peace for France. Necker acted instead on his own. This failure led directly to the bloodshed and terror of the French Revolution. Necker lived out his years outside of France, alone and afraid. The Legacy of the French Revolution and the totalitarianism that followed are in no small part his legacy.

Retrieved from https://www.newworldencyclopedia.org/p/index.php?title=Jacques_Necker&oldid=1072255
Categories:
Hidden category:
This page was last edited on 4 July 2022, at 23:39.
Content is available under Creative Commons Attribution/Share-Alike License; additional terms may apply. See Terms of Use for details.