For other uses, see The National Archives (disambiguation). 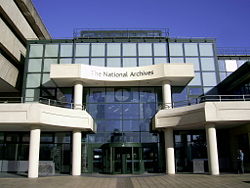 The National Archives building at Kew.

The National Archives (TNA) is a British Governmental organization created in April 2003 to maintain a national archive for "England, Wales and the United Kingdom".[1] There is a separate National Archives of Scotland (formerly the Scottish Record Office), which holds government and private documents relating to Scotland and a similar institution in Northern Ireland is the Public Record Office of Northern Ireland (PRONI).

It is institutional policy to include the definite article, with an initial capital letter, in its name (hence "The National Archives," sometimes abbreviated as TNA) but this practice is rarely followed in the media.

In order to preserve and centralize information about British history, TNA actively contacts other archives, museums, and libraries in the world. In order to centralize information, they obtain catalogs of collections from overseas libraries and inputs them into their own catalog database. TNA has also launched "Your Archive," an online community archive, using the wiki platform. Visitors can make their own contributions and deposit their records into the database.

The National Archives was created in 2003 by combining the Public Record Office and the Historical Manuscripts Commission and is both a Non-Ministerial Government Department in its own right and an Executive Agency reporting to the Secretary of State for Justice. The current Chief Executive (formally Keeper of the Public Records and Historical Manuscripts Commissioner) is Natalie Ceeney, formerly Director of Operations and Services at the British Library. She has replaced Sarah Tyacke (also previously of the British Library), who retired in October 2005.

The National Archives are based in Kew in the London Borough of Richmond upon Thames in South West London. The building was opened as 1977 as an additional home for the public records, which were held in a building on Chancery Lane. The site was originally a World War I hospital, which was later used by several government departments.[2] It is near to Kew Gardens Underground Station.

Formerly The National Archives ran the Family Records Centre in Islington on a joint basis with the General Register Office, this site closed in March 2008. There are also offices in central London (currently Admiralty Arch) and Norwich, both of which are primarily for former OPSI staff. There is also an additional record storage facility (DeepStore) in a former salt mine in Cheshire.

The National Archives describes its vision as:

TNA claims it is "at the heart of information policy - setting standards and supporting innovation in information and records management across the UK, and providing a practical framework of best practice for opening up and encouraging the re-use of public sector information. This work helps inform today's decisions and ensure that they become tomorrow's permanent record."[4]

It has a number of key roles in information policy:

The National Archives is the UK government´s official archive, 'containing 900 years of history from Domesday Book to the present', with records from parchment and paper scrolls through to digital files and archived websites.[5] The material held at Kew includes the following:

There is also a museum, which displays key documents such as the Domesday Book and has exhibitions on various topics using material from the collections.[6]

Entrance to The National Archives is free. Anybody aged 14 or over can access the original documents at the Kew site, after producing two acceptable proofs of identity and being issued a free Reader's Ticket.[7]

The reading room has terminals from which documents can be ordered up from secure storage areas by their reference number. The reference number is composed of three sections: the department code of up to four letters, such as WO for the War Office; a series or class number, for the "subcategory" or collection that the document comes from; and an individual document number. Documents can also be ordered in advance.[8]

Once a document has been ordered, The National Archives aims to get it to the reader within 35 minutes (assuming it is kept at Kew rather than at their second repository, "Deep Store" – a former salt mine in Cheshire).

You do not need a reader's ticket if you are accessing records on microform. Frequently accessed documents such as the Abdication Papers have been put on microfilm, as have records for two million First World War soldiers. The originals of the latter were stored in a warehouse in London along with four million others, but incendiary bombs dropped on the warehouse in the Second World War started a fire in which most were destroyed. The surviving third were largely water or fire-damaged and thus acquired the colloquial name of the "Burnt Documents." Because they were mostly too fragile for public access, they were put on microfilm with the aid of the Heritage Lottery Fund. They are currently being digitized, and should be ready to be accessed online by the end of 2008. A limited number of documents are available on microfiche.

Some of the most popular documents have now been digitized and are available to download, via the DocumentsOnlinedelivery system, for a small fee.[9] All of the open census records have been digitized, and there are also significant other sources online (such as wills proved in the Prerogative Court of Canterbury, 1383-1858). Researchers are encouraged to check the online services first, to see if they can get what they want online. If a document is available online, The National Archives' policy is to encourage people to use the digital copy and not the original, even if they come to Kew, in order to protect the original from damage.

The National Archives has also now set up a 'digitization on demand' service (called 'Digital Express') where for a small fee a document can be scanned and sent to the researcher electronically (up to 10 pages for a fixed fee) to enable people to access the documents wherever they are, (excluding particularly large or fragile records).[10] 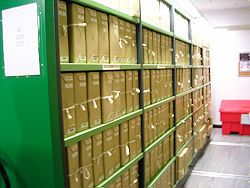 Moveable shelving in one of the more modern repositories

The documents are stored on compactus - double-sided shelves, which are pushed together so that there's no aisle between them. A large handle on the end of each shelf allows them to be moved along tracks in the floor to create an aisle when needed.

They are generally stored in acid-free folders or boxes.

In the event of a fire The National Archives would be clearly unable to use sprinklers for fear of ruining its holdings, and so when the building is evacuated, argon gas is released into the air-tight repositories.

The National Archives also provides services to help users in their research and also find collections beyond those they hold.

Access to Archives (also known as A2A) is a database containing details of archival collections held in many different archive repositories in England and Wales.[11] As of March 2008, there are no more plans to add additional collections to A2A due to lack of funding from the Heritage Lottery Fund and the changing financial priorities of the TNA, though there is still facilities to update existing entries.[12] The A2A database was transferred to the TNA's with a new platform with a simpler interface to ensure its availability.[13]

The National Register of Archives (NRA) is the central point for the collection and circulation of information about the content and nature of archival manuscripts relating to British history. It contains unpublished lists and catalogues that describe archival collections in the UK and overseas. The register can be consulted in the National Archives reading room and the index is searchable as on-line database on the National Archives web site.

The information is collected in a variety of ways. TNA is sent hard-copy catalogues from archival repositories that hold records relating to British history. These are kept in the reading room at the National Archives and indexed on the on-line database. TNA conducts an annual survey of archival repositories on the NRA and records all new accessions, and the accession lists are also available on the TNA's web site. Also information is taken from surveys and guides to archival collections as well as other publications.

ARCHON Directory is a database of contact details for archive repositories in the UK and institutions elsewhere in the world which have substantial collections of manuscripts relating to British history.