Tent caterpillar is the common name for any of the social caterpillars comprising the genus Malacosoma in the moth family Lasiocampidae. Tent caterpillars typically are characterized by the conspicuous silk tentlike webs, or tents, that these larvae build in the branches of host trees. The forest tent caterpillar, Malacosoma disstria, is exceptional in that the larvae build no tent at all, aggregating instead on silken mats that they spin on the leaves or bark of trees.

Species occur in North America, Mexico, and Eurasia. Twenty-six species have been described, six of which occur in North America. Some species are considered to have subspecies as well. Although most people consider tent caterpillars only as pests due to their habit of defoliating trees, they are among the most social of all caterpillars and exhibit many noteworthy behaviors.

Tent caterpillars can be quite a nuisance, defoliating trees and making a mess when smashed on sidewalks and driveways (Mahr 2007). Nonetheless, they provide values for ecosystems and humans. Tent caterpillars are part of forest food chains, consuming leaves and being consumed by birds, parasitic wasps, and other predators. For humans, their unique tents and behavior adds to the wonder of nature. Even the trees, if not already weakened by disease or environmental stresses, are not seriously damaged (Mahr 2007). Because the caterpillars typically end their feeding during a time of vigorous leaf activity, even completely defoliated trees generally will leaf out again within two or three weeks, revealing a harmony between the insects and the trees (Mahr 2007).

Tent caterpillars should not be confused with fall webworms. Whereas tent caterpillars make their tents in the nodes and branches of a tree's limbs, webworms enclose leaves and small branches at the ends of the limbs in a light gray, silken webs.

A caterpillar is the larval stage of a member of the order Lepidoptera (the insect order comprising butterflies and moths). They are essentially eating machines, mostly consuming leaves and other plant material (phytophagous), spending most of their time in search of food.

Tent caterpillars are found within the moth family Lasiocampidae. Caterpillars of this family are large in size and are most often hairy, especially on their sides. Most have skin flaps on their prolegs and a pair of dorsal glands on their abdomen. They feed on leaves of many different trees and shrubs and often use these same plants to camouflage their cocoons. As adults, the moths in this family are large bodied with broad wings and may still have the characteristic elongated mouth parts, or have reduced mouthparts and not feed as adults. Females lay a large number of eggs which are flat in appearance and either smooth or slightly pitted. In tent caterpillars, the eggs are deposited in masses and covered with a material that hardens in air. Females are generally larger and slower than the males, but the sexes otherwise resemble each other. Moths are typically brown or grey, with hairy legs and bodies. 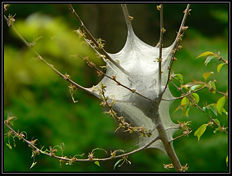 Tent caterpillars comprise the Malacosoma genus within Lasiocampidae. They are readily recognized because they are social, colorful, diurnal, and build conspicuous silk tents in the branches of host trees. Some species, such as the well-known eastern tent caterpillar, Malacosoma americanum, build a single large tent that is typically occupied through the whole of the larval stage, while others build a series of small tents that are sequentially abandoned. The forest tent caterpillar, Malacosoma disstria, does not make tents; rather, the larvae weave a silky sheet where they lie together during molting. The caterpillars are social and travel and feed en masse.

Tents facilitate aggregation and serve as focal sites of thermal regulatory behavior. They also serve as communication centers where caterpillars are alerted to the discovery of new food finds, as discussed below. 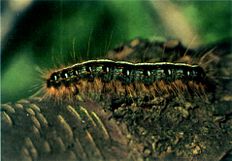 Tent caterpillars hatch from their eggs in the early spring at the time the leaves of their host trees are just unfolding. The caterpillars establish their tent soon after they enclose. The tent is constructed at a site that intercepts the early morning sun. The position of the tent is critical because the caterpillars must bask in the sun to elevate their temperatures above the cool ambient temperatures that occur in the early spring. Studies have shown that when the body temperature of a caterpillar is less than about 15 °C, digestion cannot occur. The tent consists of discrete layers of silk separated by gaps; the temperature in these compartments varies markedly. Caterpillars can adjust their body temperatures by moving from one compartment to another. On cool mornings, they typically rest in a tight aggregate just under a sunlit surface of the tent. It is not uncommon to find that the temperature of the aggregate is as much as 30° C warmer than the surrounding air temperature on cold but sunny spring mornings. Later on in the spring, temperatures may become excessive at midday and the caterpillars may retreat to the shaded outside surface of the tent to cool down.

Leaves consists largely of nondigestible components, and it has been estimated that tent caterpillars void, as fecal pellets, nearly half of the energy they ingest. Consequently, a colony of caterpillars produces large quantities of fecal pellets. This is particularly noticeable during outbreaks of the forest tent caterpillar. Fecal pellets dropping from treetops in which the caterpillars are feeding create the auditory illusion of rainfall.

Caterpillars grow through a series of molts and each intermediate stage is called an instar. Near the end of each instar, the larva undergoes a process called apolysis, in which the cuticle, the tough covering that is a mixture of chitin and specialized proteins, is released from the epidermis and the epidermis begins to form a new cuticle beneath. At the end of each instar, the larva molts the old cuticle, and the new cuticle rapidly hardens and pigments. Development of wing patterns begins by the last larval instar.

Tent caterpillars typically have five to six larval instars. It is estimated that the last instar consumes about 80% of all the food taken in by a larva during the whole of its life cycle. Consequently, it is not uncommon for populations of forest tent caterpillars to go unnoticed until the last instar when their feeding causes extensive defoliation of trees. 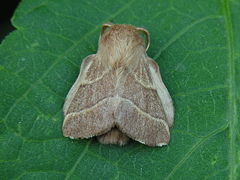 Caterpillars grow rapidly and typically complete their larval development in seven to eight weeks. When fully grown, the caterpillars leave the natal tree and seek protected places on the ground or under the eaves of buildings to spin their cocoons. About two weeks later they emerge as adults.

Shortly after eclosing from the cocoon, the female moth secretes a pheromone which draws males to her. Mating typically occurs in the early evening and the mated female, already fully laden with eggs, typically oviposits the full complement later that same evening. The eggs are placed around the circumference of a branch and covered with a frothy material called spumaline. Spumaline is hydrophilic and prevents the eggs from drying out. It also serves as a protective covering that limits the ability of small wasps to parasitize the eggs. Although the male moth may live for a week or more, the female dies soon after laying her eggs. Thus, the whole of the female’s life as an adult may take place in fewer than 24 hours.

Shortly after the egg mass is deposited, embryogenesis begins and within three or so weeks small larvae can be found within each egg. These pharate larvae lie sequestered within the shells of the eggs until the following spring. Thus, these encased larvae are the most durable of the insect’s life stages. In northern areas, the pharate larvae are highly freeze tolerant and can withstand midwinter temperatures as low as -40 °C.

Tent caterpillars exhibit boom or bust population dynamics. The most notorious of the outbreak species is the forest tent caterpillar. During outbreaks, the caterpillars can become so abundant that they are capable of completely defoliating tens of thousands of acres of forest. Although these outbreaks do not follow true cycles in the sense of occurring at regular intervals, some particularly prone regions have recorded outbreaks every ten years or so. Caterpillars rarely remain in outbreak numbers for more than two to three years. Factors that bring outbreaks to a close include parasitoids and disease. In some cases populations collapse because caterpillars starve to death either because trees are completely defoliated before the caterpillars are fully grown or because the quality of host leaves declines to the point where there are no longer palatable. Defoliated trees typically refoliate after caterpillar attacks and experience no lasting damage. In some cases, however, trees or parts of trees may be killed after several seasons of repeated defoliation. This has occurred when forest tent caterpillars defoliated sugar maples that were already stressed due to drought.

Retrieved from https://www.newworldencyclopedia.org/p/index.php?title=Tent_caterpillar&oldid=683639
Categories:
Hidden category:
This page was last edited on 2 April 2008, at 17:34.
Content is available under Creative Commons Attribution/Share-Alike License; additional terms may apply. See Terms of Use for details.