The word tengri in Orkhon script.

Tengri is the supreme god of the old Xiongnu, Xianbei, Turkic, Bulgar, Mongolian, Hunnic and Altaic religion named Tengriism. For the ancient Turks and Mongols, the words `Tengri' and `Sky' were synonymous. The physical appearance of Tengri was unknown, and he was considered to be timeless and infinite like a blue sky. Tengri was the primary deity of a pantheon of gods associated with various aspects of human existence and natural phenomena. Ancient Turks and Mongols believed that Tengri governed all existence on earth, determining the fate of individuals as well as that of entire nations. Turkic and Mongol rulers based their power on a mandate from Tengri, representing themselves as his sons on earth. When a ruler lost power, it was considered a sign that he had not acted in harmony with celestial law.

Tengri is a probable precursor of the Chinese deity Tian, which became prominent during the Zhou Dynasty (1122 – 256 B.C.E.). Ancient Turks and Mongols maintained a continuous belief in Tengri throughout their history, and belief in Tengri has been partially preserved until the present by Altaic peoples. Tengri is associated with Central Asian shamanism. During the Middle Ages, Tengri received the Persian name “Khodai.” Even when Buddhism, Lamaism or Islam became the predominant religions among the Turkic peoples and Mongols, the concept of Tengri, the "Sky God," persisted. In modern Turkish, the derived word "Tanrı" is used as the generic word for "god," also for the Judeo–Christo–Islamic God, and is often used today by practicing Muslim Turks to refer to God in Turkish as an alternative to the word "Allah," the originally Arabic Islamic word for "God." "Tengri" is the oldest known Turkic word, believed to have originated in the sixth century B.C.E.[1] 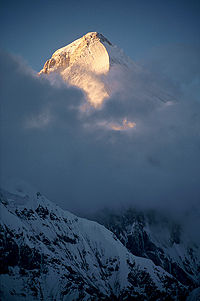 Peak of Khan Tengri at sunset. Photo taken by Simon Garbutt in July 2002.

Tengri first appeared in Chinese records referring to the Xiongnu as Cheng Li (Chinese: 撑犁).[2][3]. The ancient Turks believed that Tengri was the leader of the 17 deities who ruled the universe: Tengri, Yer-Sub, Umai, Erlik, Earth, Water, Fire, Sun, Moon, Star, Air, Clouds, Wind, Storm, Thunder and Lightning, Rain and Rainbow. His greatness was emphasized by adding the title "Khan" to his name [4]. In ancient Mongolian cosmology, the Sky-Father (Tengri/Tenger Etseg) and Mother Earth (Eje/Gazar Eej) were the central beings of a group of 99 deities. Tengri had at least two sons, associated with the eastern and western directions. Ulgen, associated with the west, was Lord of the spirits of the upper world and creator of man, the dog, and all the animals. His eastern brother Erleg Khan, associated with the east, was Lord of the spirits of the lower world. He created the eagle, which it was forbidden to eat, and brought forth evil spirits which caused disease.[5]

For the ancient Turks and Mongols, the words `Tengri' and `Sky' were synonymous. The physical appearance of Tengri was unknown. He was not visualized as a person, although he was said to have at least two sons. Tengri was considered to be timeless and infinite like a blue sky. The term Kuk-Tengri (Blue Sky) referred to a spiritual, celestial “sky,” and the epithet “kuk” (blue) when applied to an animal, such as a horse (kuk at), ram (kuk teke), bull (kuk ugez), or deer (kuk bolan), was a reference to the animal’s divine origin, not its color.[7] According to Mahmud Kashgari (1005 – 1102), a renowned scholar and lexicographer of Turkic dialects, Tengri was known to make plants grow and the lightning flash. Turks used the adjective tengri which means "heavenly, divine," to label everything that seemed grandiose, such as a tree or a mountain, and they revered such entities.[8] A dramatic pyramidal mountain peak, long believed to be the highest point on the border between Kazakhstan and Kyrgyzstan, is called "Khan Tengri."

Relationship between Tengri and human beings

According to ancient mythology, human beings appeared from a marriage of Tengri and the deity Earth, considered to be a mother and a wife of Tengri. Tengri gave a Kut (Soul) to each human being at birth. The Earth gave each human being a material shell in which to exist as an individual distinct from others, and be creative. A human being was born and lived his or her life on Earth; at death, Earth swallowed the material body and Tengri took back the soul.

Ancient Turks and Mongols believed that Tengri governed all existence on earth, determining the fate of individuals as well as that of entire nations and their rulers. The eighth century “Orkhon inscriptions” discovered in 1889 in the Orkhon Valley in Mongolia, contain numerous references to Tengri that illustrate the relationship between Tengri and mankind. One of them bears this quote from the Gokturk Bilge-Khagan:

“All human sons are born to die in time, as determined by Tengri.”

Tengri was omnipresent and was worshipped simply, by lifting the hands upwards and bowing low, praying for him to bestow good mind and health, and to assist in performing good deeds. It was the individual’s responsibility to initiate those good deeds, and to consciously live in harmony with natural law and the spirits of nature.

It was believed that Tengri assisted those who revered Him and who were active in trying to accomplish His will. Genghis Khan, quoted speaking to his followers in The Secret History of the Mongols (written 1227) said:

“You, Djurchedai, have struck an enemy. You overturned them all: Djurginians, and Tubeganians, and Dunkhaits. And one thousand of the selected guards of Khori-Shilemun. When you advanced to the main central regiment, then with arrow - uchumakh you wounded rose-faced Sangum in the cheek. That is why Eternal Sky opened for us gates and paths'.” Rafael Bezertinov. Tengrianizm – Religion of Túrks and Mongols.[9]

Tengri was believed to act of his own volition, but with fairness, meting out rewards and punishments. A number of expressions still in use among Turkic peoples, such as “Tengri – jarlykasyn” (“Let Tengri award you”), “Kuk sukkan” (“damned by the Sky”) and “Kuk sugar” (“the sky will damn”) are associated with belief in Tengri.

Tengri as a Source of Political Power

In former Turkic states before the Middle Ages, among them the Göktürks, the khans based their power on a mandate from Tengri. These rulers were generally accepted as the sons of Tengri and His representatives on earth. They assumed titles such as tengrikut, kutluġ, or kutalmysh, based on the belief that they had attained the kut, the mighty spirit granted to these rulers by Tengri.[10] It was believed that Tengri bestowed wisdom and authority on political rulers. A monument to Bilge-Khagan, a great leader of the Göktük empire, states:

“After the death of my father, at the will of Türkic Tengri (Sky) and Türkic sacred Yer-Sub (Earth and Water), I became Khan'. `Tengri who gives the states (to Khans), put me, it should be thought, as Khagan, so that the name and glory of the Türkic people would not disappear.”[11]

A monument in honor of Kul-Tegin, a famous general, reads:

“Tengri (Sky), ruling my father Ilterish-Khagan and my mother Ilbilgya-Katun from the (celestial) heights, ennobled them (above the people)…. As Tengri (Sky) gave them strength, the army of Khagan my father was like a wolf, and his enemies like sheep.”[12]

Khagans were elected by a council of Beks (tribal elders) who consulted until they felt that Tengri Himself pointed to the candidate. A legitimate Khan should be `Tengri-like, begotten by Tengri, a wise Türkic Khagan, brave, clever, honorable, vigorous, fair, in all features a real bozkurt (wolf), able to hold the respect of the people and the nobles. A Khagan lived under Tengri’s protection for as long as he himself was in accord with Tengri. When the Khagan ruled improperly Tengri withdrew his support. When a Khagan lost power (lost the Mandate of Heaven), it was considered a sign that he had not acted in harmony with celestial law, and if he had not already perished, he was typically ritually executed.

Genghis Khan, the unifier of the Mongolian nation, based his power on a mandate from Tengri, and began all his declarations with the words "by the will of Eternal Blue Heaven." In Secret History of the Mongols, he is said to have addressed his sons, “Eternal Sky will multiply your strength and power and will pass to your hands Togtai's sons … “with the help of Eternal Sky shall we transform our commonwealth state.”[13]

Tengri in Other Religions and Cultures

Tengri is analogous with the Chinese Tian. The German sinologist Axel Schüssler suggests tengri as an etymology for tian (天, "sky; heaven; god"), which came into prominence with the Zhou Dynasty (1122 – 256 B.C.E.)[14][15]

During the Middle Ages, Tengri received the Persian name “Khodai.” Missionaries of other religions tried to identify Tengri with the Christian God or Moslem Allah, but even when Buddhism, Lamaism and Islam became the predominant religions among the Turkic peoples and Mongols, the concept of Tengri, the Sky God, persisted[16] In modern Turkish, the derived word "Tanrı" is used as the generic word for "god," also for the Judeo–Christo–Islamic God, and is often used today by practicing Muslim Turks to refer to God in Turkish as an alternative to the word "Allah," the originally Arabic Islamic word for "God." "Tengri" is the oldest known Turkic word, believed to have originated in the sixth century B.C.E.[17]

Retrieved from https://www.newworldencyclopedia.org/p/index.php?title=Tengri&oldid=1084446
Categories:
Hidden category:
This page was last edited on 28 October 2022, at 22:40.
Content is available under Creative Commons Attribution/Share-Alike License; additional terms may apply. See Terms of Use for details.