The Primary Chronicle (Old-Slavonic: Повѣсть времяньныхъ лѣтъ; Russian: Повесть временных лет, Povest' vremennykh let; Ukrainian: Повість времмених літ, Povist' vremennykh lit; often translated into English as Tale of Bygone Years), is a history of the Kievan Rus' from around 850 to 1110 originally compiled in Kiev about 1113.[1] The early part of the chronicle is rich in anecdotal stories, among which are the arrival of the three Varangian brothers, the founding of Kievan Rus', the murder of Askold and Dir, the death of Oleg, who was killed by a serpent concealed in the skeleton of his horse, and the vengeance taken by Olga, the wife of Igor, on the Drevlians, who had murdered her husband. Nestor also recounts the adoption of Christianity under Vladimir the Great.

There are three editions of the work. The first was mainly composed of humorous and biographical stories and is thought to have been composed by the monk Nestor. The second edition was an edited version of the first completed by Sylvester, while the third was compiled by an unknown author who helped to update information regarding the ancient city of Byzantine. Two manuscripts, the Laurentian codex and the Hypatian codex, are extant today. The five main witnesses to the original who composed subsequent version were: Laurentian (RNB, F.IV.2 composed in 1377), Radziwill (BAN, 34. 5. 30 circa the 1490s), Academy (RGB, MDA 5/182 dated to the fifteenth century), Hypatian (BAN, 16. 4. 4 circa 1425), and Khlebnikov (RNB, F.IV.230 dated to sixteenth century). The Khlebnikov version contains numerous gaps which are supplemented by Pogodin (RNB, Pogodin 1401 composed in the early seventeenth century).[2] 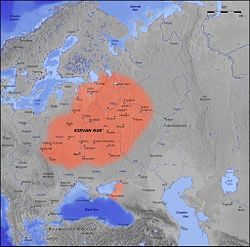 Saint Nestor the Chronicler (c. 1056 - c. 1114 Kyiv) was the reputed author of the Life of the Venerable Theodosius of the Kiev Caves the Life of the Holy Passon Bearers, Boris and Gleb, and of the so-called Reading.

Nestor was a monk of the Monastery of the Caves in Kiev from 1073. The only other detail of his life that is reliably known is that he was commissioned with two other monks to find the relics of St. Theodosius of Kiev, a mission which he succeeded in fulfilling. It is also speculated that he supported the reigning prince Svyatopolk II and his pro-Scandinavian party and disliked Greek influence in Kiev. 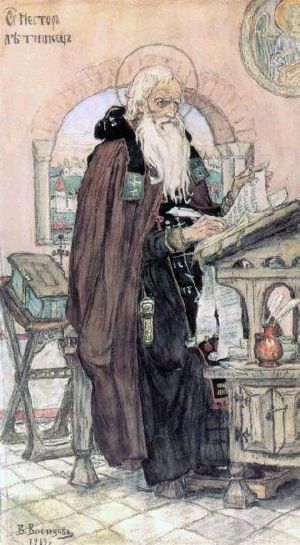 For a long time the original compilation was attributed to a monk named Nestor, and hence it was formerly referred to as Nestor's Chronicle, or Nestor's manuscript. Among his many sources were an earlier (now lost) Slavonic chronicles, Byzantine annals of John Malalas and George Hamartolus, native legends and Norse sagas, several Greek religious texts, Rus-Byzantine treaties, and the oral accounts of Yan Vyshatich and other military leaders. Nestor worked at the court of Sviatopolk II of Kiev and probably shared his pro-Scandinavian policies.

The early part is rich in anecdotes from the founding of Kiev. These include the arrival of the three Varangian brothers, the murder of Askold and Dir, the death of Oleg, who was killed by a serpent concealed in the skeleton of his horse, and the vengeance taken on the Drevlians by Olga, Igor's wife, for murdering her husband. The account of the labors of Saints Cyril and Methodius among the Slavic peoples is also very interesting, and to Nestor we owe the tale of the summary way in which Vladimir the Great suppressed the worship of Perun and other idols at Kiev.

The Primary Chronicle reports that in the year 987, as the result of a consultation with his boyars, Vladimir sent envoys to study the religions of the various neighboring nations whose representatives had been urging him to embrace their respective faiths. The result is amusingly described by the chronicler Nestor. Of the Muslim Bulgarians of the Volga the envoys reported there is no gladness among them; only sorrow and a great stench, and that their religion was undesirable due to its taboo against alcoholic beverages and pork; supposedly, Vladimir said on that occasion: "Drinking is the joy of the Rus'." Russian sources also describe Vladimir consulting with Jewish envoys (who may or may not have been Khazars), and questioning them about their religion but ultimately rejecting it, saying that their loss of Jerusalem was evidence of their having been abandoned by God. Ultimately Vladimir settled on Christianity. In the churches of the Germans his emissaries saw no beauty; but at Constantinople, where the full festival ritual of the Byzantine Church was set in motion to impress them, they found their ideal: "We no longer knew whether we were in heaven or on earth," they reported, describing a majestic Divine Liturgy in Hagia Sophia, "nor such beauty, and we know not how to tell of it." If Vladimir was impressed by this account of his envoys, he was yet more so by political gains of the Byzantine alliance.

In the year 1116, Nestor's text was extensively edited by hegumen Sylvester who appended his name at the end of the chronicle. As Vladimir Monomakh was the patron of the village of Vydubychi where his monastery is situated, the new edition glorified that prince and made him the central figure of later narrative. This second version of Nestor's work is preserved in the Laurentian codex.

A third edition followed two years later and centered on the person of Vladimir's son and heir, Mstislav the Great. The author of this revision could have been Greek, for he corrected and updated much data on Byzantine affairs. This latest revision of Nestor's work is preserved in the Hypatian codex. 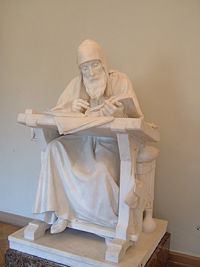 Nestor the Chronicler, by Mark Antokolski, 1890

Laurentian Codex (Russian: Лаврентьевский список, Лаврентьевская летопись) is a collection of chronicles that includes the oldest extant version of the Primary Chronicle and its continuations, mostly relating the events in the Northern Russia (Vladimir-Suzdal).

The codex was copied by the Nizhegorod monk Laurentius for the Prince Dmitry Konstantinovich in 1377. The original text he used was a lost codex compiled for the Grand Duke Mikhail of Tver in 1305. The account continues until 1305, but the years 898-922, 1263-83 and 1288-94 are for some reason omitted. The manuscript was acquired by the famous Count Musin-Pushkin in 1792 and subsequently presented to the Russian National Library in St Petersburg.

The Hypatian Codex was discovered at the Hypatian Monastery of Kostroma by noted Russian historian Nikolay Karamzin. The Hypatian manuscript dates back to the fifteenth century, but it incorporates much precious information from the lost twelfth-century Kievan and thirteenth-century Halychian chronicles. The language of this work is Old Church Slavonic with many East Slavisms.

Since 1810, the codex has been preserved in the Russian National Library, St Petersburg.

Numerous monographs and published versions of the chronicle have been made, the earliest known version dating from 1767. Aleksey Shakhmatov published a pioneering textological analysis of the narrative in 1908. Dmitry Likhachev and other Soviet scholars partly revised his findings. Their versions attempted to reconstruct the pre-Nestorian chronicle, compiled at the court of Yaroslav the Wise in the mid-eleventh century.

Unlike many other medieval chronicles written by European monks, the Tale of Bygone Years is unique as the only written testimony on the earliest history of East Slavic peoples. Its comprehensive account of the history of Kievan Rus' is unmatched in other sources, although important correctives are provided by the Novgorod First Chronicle. It is also valuable as a prime example of the Old East Slavonic literature. No original copies remain; only secondary versions of the work are available to study. The piece has generated an extensive amount of historical research.

Retrieved from https://www.newworldencyclopedia.org/p/index.php?title=Tale_of_Bygone_Years&oldid=1030972
Categories:
Hidden category:
This page was last edited on 19 January 2020, at 22:41.
Content is available under Creative Commons Attribution/Share-Alike License; additional terms may apply. See Terms of Use for details.