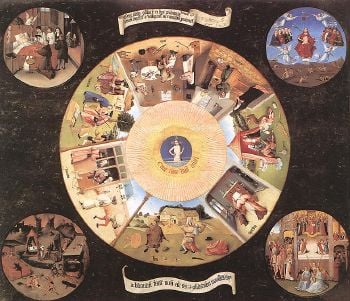 In Roman Catholicism, the Seven Deadly Sins, also known as the capital vices or cardinal sins, are a list of the worst vices that cut a person off from God's grace. In Latin and English, the Seven Deadly Sins are: superbia (pride), avaritia (greed), luxuria (extravagance, later lust), invidia (envy), gula (gluttony), ira (wrath), and acedia (sloth). Each of the Seven Deadly Sins corresponds to one of the Seven Holy Virtues (see below), and together these lists were the moral standards and tests of the early Catholic Church.

Much debate thrived over the relative merit of the Seven Deadly Sins in the scope of salvation, as well as their particular ranking. The Roman Catholic Church differentiates between two different types of sin: venial sin (forgiven through a sacrament) and capital sin (meriting damnation without reconciliation). The Seven Deadly Sins may be venial or mortal depending on the specific case (see below).

Mortal sins are sins of grave (serious) matter, where the sinner is aware that the act (or omission) is both a sin and a grave matter, but still performs the act (or omission) with deliberate consent. The act of committing a mortal sin cuts off the sinner from God's grace; it is in itself a rejection of God. If left un-reconciled, mortal sins result in eternal punishment in Hell. Thus, mortal sin is sin causing spiritual death. (Rom. 5:12; 6:23).

In order for a sin to be mortal, it must meet three conditions:

Venial sins are sins that do not meet the conditions for mortal sins. The sin may be one that is not a grave matter, or if a grave matter, the individual does not realize that the act is a sin, or does not deliberately consent to the sin. The act of committing a venial sin does not cut off the sinner from God's grace, as the sinner has not rejected God. However, venial sins do injure the relationship between the sinner and God, and as such, must be reconciled to God, either through the sacrament of reconciliation or receiving the Eucharist.

Catholic doctrine also sees sin as being twofold: Sin is, at once, any evil or immoral action that causes infraction in God's law and the inevitable consequences, the state of being that comes about by committing the sinful action. Sin can and does alienate a person both from God and the community. Hence, the Catholic Church's insistence on reconciliation with both God and the Church itself.

While no list of the seven deadly sins appears as such in the Bible itself, each of the sins is condemned at various points in the text. A list of seven sins that God hates is found in Proverbs 6:16-19:

There are six things the Lord hates, seven that are detestable to him: haughty eyes, a lying tongue, hands that shed innocent blood, a heart that devises wicked schemes, feet that are quick to rush into evil, a false witness who pours out lies, and a man who stirs up dissension among brothers. (New International Version)

In the fourth century, further elucidation of the sins was provided by the poet Prudentius (ca. 348-ca. 405 C.E.) in his descriptions of battles between the Virtues and Vices in the Psychomachia ("The Contest of the Soul"). Additionally, Evagrius of Pontus (349-399 C.E.), a Greek theologian, introduced the concept of eight offenses and passions that a human could fall victim to while on earth. They were the result of an abnormal obsession with self. The cure for each of these was an adoption of selfless attitudes towards the world.

It has also been suggested that the original classification may have been monastic in origin.[2]

In the later part of the sixth century C.E., Pope Gregory the Great (d. 604) in his work Moralia on Job (esp. XXXI.45), introduced the seven deadly sins and has given us the classical exposition on the subject. The goal of the seven deadly sins was to illustrate for laypersons of the church the need to be mindful of capital sin, or sin which requires penance in Hell. Capital sin is graver than venial sin, which can be forgiven through confession.

Pope Gregory's list of Seven Deadly Sins was different from the one found today, and his ranking of the Sins' seriousness was based on the degree that they offended against love. From least serious to most, were: lust, gluttony, sadness, avarice, anger, envy, and pride. Sadness would later be replaced by acedia (sloth), putting off or failing to do what God asks of you.

Several of these sins interlink and various attempts at causal hierarchy have been made. For example, pride (love of self out of proportion) is implied in gluttony (the over-consumption or waste of food), as well as sloth, envy and most of the others. Each sin is a particular way of failing to love God with all one's resources and to love fellows as much as self. The Scholastic theologians developed schema of attributes and substance of will to explain these sins.

However, the highly influential theologian and philosopher Thomas Aquinas (1225-1273) contradicted the notion that the seriousness of the capital sins should be ranked. In medieval scholasticism the Seven Deadly Sins were the focus of considerable attention. [3]

Beginning in the early fourteenth century, the popularity of depicting the Seven Deadly Sins by artists of the time ingrained them in western popular consciousness. The Italian poet Dante Alighieri (1265-1321 C.E.), wrote three epic poems (known collectively as the Divine Comedy) titled Inferno, Purgatorio, and Paradiso. In his book Inferno, Dante recounts the visions he has in a dream in which he enters and descends into Hell. According to Dante, he is told by his guide that a soul's location in Hell is based upon the sins that they commit when they are alive. In each 'ring' of hell, a specific punishment is doled out. As they descend lower and lower, the punishments (and consequently sins) become worse and worse until he reaches the bottom and discovers Satan. In Inferno, Dante encounters these sins in the following order (canto number): Lust (5), Gluttony (6), Avarice (7), Wrath (7-8), Heresy (10), Violence (12-17), Blasphemy (14), Fraud (18-30), and Treachery (32-34).

In the official Catechism of the Catholic Church, consisting of 2,865 numbered sections and first published in 1992, by order of Pope John Paul II, the seven deadly sins are dealt with in one paragraph. The principal codification of moral transgression for Christians continues to be the Ten Commandments and the Beatitudes, which are a positive statement of morality.

The Seven Deadly sins are listed today as follows:

Lust (fornication, perversion) —
Obsessive, unlawful depraved thought, or unnatural desire for sexual excitement, such as desiring sexual intercourse with a person outside marriage or engaging in unnatural sexual appetites. Rape and sodomy are considered to be extreme lust and are said to be mortal sins. Dante's criterion was "excessive love of others," thereby detracting from the love due to God. Lust prevents clarity of thought and rational behavior.

Gluttony (waste, overindulgence) —
Thoughtless waste of everything, overindulgence, misplaced sensuality, uncleanliness, and maliciously depriving others. Marked by refusal to share and unreasonable consumption of more than is necessary, especially food or water. Destruction, especially for sport. Substance abuse or binge drinking. Dante explains it as "excessive love of pleasure."

Avarice (greed, treachery) —
A strong desire to gain, especially in money or power. Disloyalty, deliberate betrayal, or treason, especially for personal gain or when compensated. Scavenging and hoarding of materials or objects. Theft and robbery by violence. Simony is the evolution of avarice because it fills you with the urge to make money by selling things within the confines of the church. This sin is abhorred by the Catholic Church and is seen as a sin of malice. Dante included this sin in his first novel. Simony can be viewed as betrayal. Thomas Aquinas on greed: "it is a sin against God, just as all mortal sins, in as much as man condemns things eternal for the sake of temporal things."

Sloth (apathy, indifference) —
Apathy, idleness, and wastefulness of time. Laziness is particularly condemned because others must work harder to make up for it. Cowardice or irresponsibility. Abandonment, especially of God. Dante wrote that sloth is the "failure to love God with all one's heart, all one's mind and all one's soul".

Wrath (anger, hatred) —
Inappropriate (unrighteous) feelings of hatred and anger. Denial of the truth to others or self. Impatience or revenge outside of justice. Wishing to do evil or harm to others. Self-righteousness. Wrath is the root of murder and assault. Dante described wrath as "love of justice perverted to revenge and spite".

Envy (jealousy, malice) —
Grieving spite and resentment of material objects, accomplishments, or character traits of others, or wishing others to fail or come to harm. Envy is the root of theft and self-loathing. Dante defined this as "love of one's own good perverted to a desire to deprive other men of theirs".

Pride (vanity, narcissism) —
A desire to be more important or attractive to others, failing to give credit due to others, or excessive love of self (especially holding self out of proper position toward God). Dante's definition was "love of self perverted to hatred and contempt for one's neighbor." In Jacob Bidermann's medieval miracle play, Cenodoxus, superbia is the deadliest of all the sins and leads directly to the damnation of the famed Doctor of Paris, Cenodoxus. Pride was what sparked the fall of Lucifer from Heaven. Vanity and narcissism are good examples of these sins and they often lead to the destruction of the sinner, for instance by the wanton squandering of money and time on themselves without caring about others. Pride can be seen as the misplacement of morals.

In the original classification, "Pride" was considered to be the 'deadliest' of all sins, and was the father of all sins. This relates directly to Christian philosophy and the story of Lucifer as told in the Bible. Lucifer, the highest angel in heaven, surrendered to the sin of pride and demanded that the other angels worship him. This being a violation of God's will, Lucifer and his followers were cast from heaven.

However, other interpretations have viewed "Greed" as the keystone of the seven deadly sins, and see the other deadly sins as manifestations of wanton greed:

Alternatively, one could consider Lust to be the central sin:

Another interpretation of these sins is to see all the Seven Deadly Sins as an extension of "Sloth":

Many of these interpretive schemes are reductionistic, and are not accepted by the Roman Catholic Church.

The Roman Catholic Church recognizes the seven virtues as opposites to the seven sins: