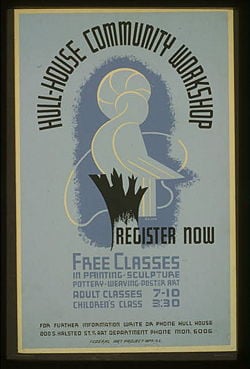 The late nineteenth century settlement movement, which began in London, England, with the founding of Toynbee Hall, emerged from a deep Victorian concern with urban poverty which gave rise to a subsequent movement whereby those connected to British universities sought to settle students within impoverished areas to live and work alongside local people. Through such efforts, settlement houses, or community centers, neighborhood houses, and social welfare agencies, were established to promote aspects of education, business, recreation, and the arts amongst society’s most underprivileged populations. The widespread establishment of settlement houses and the eventual settlement movement gave rise to many social policy initiatives that aimed to improve the conditions of society’s most excluded members. The movement extended throughout Great Britain, the United States, parts of Western Europe, Southeast Asia, and Japan. While numbers of volunteers have declined, many settlement houses continue to operate in the spirit of community-based efforts to serve the underprivileged. While great inequalities remain in human society, such efforts continue to make valuable and necessary contributions to the improvement of the lives of many.

The settlement movement began in 1884, with the founding of London’s Toynbee Hall by curate Samuel Barnett and his wife, Henrietta. Nineteenth century London, a city rife with the widespread effects of industrialization, urbanization, and immigration, saw consistent increases in crime and poverty, and a growing population of uneducated children and adults. Aiming to improve the impoverished conditions of, specifically, London’s East Side, the Barnetts invited a number of recent university graduates to live amongst the city’s poorest to help settle the dilapidated area of London’s Whitechapel neighborhood. Finding it their Christian duty and social obligation to provide education, fellowship, and various social services to the impoverished population, the Barnetts worked to attract affluent Oxford University students to the area in hopes of their becoming active in and on the behalf of the city’s poor community. With its great success, Toynbee Hall attracted various philanthropists, social activists, educators and reformers from around the world to live and learn from the establishment. Early residents included Americans Stanton Coit, Vida Dutton Scudder, and Jane Addams who would all play an influential role in the founding of the American settlement movement.

In the early twentieth century, the need for social settlements would be replaced by more active political intervention, and the number of such establishments declined throughout Europe and the United States. Such decline began with significant decreases in the number of volunteers willing to work in such settlements. As more opportunities presented themselves for individuals to be employed in aspects of social work, the number of settlement residents significantly declined. In addition, political initiatives directed toward assuaging urban poverty and increasing education helped to solve many of the problems that proved the basis of settlement operations.

The British Settlement Movement came about with the founding of Toynbee Hall, which provided London’s poorest population with services including tutorial classes, cultural clubs and organizations, and forums for discussion and debate. Residents proved able and committed to the philanthropic cause and included British reformers such as William Beveridge, R. H. Tawney, Clement Atlee, and Kenneth Lindsay who worked to address issues of class struggles, urban impoverishment, and immigrant education. As the success of Toynbee Hall continued to grow, its influence also reached a political level, helping to direct local community residents toward political activism.

Following the establishment of Toynbee Hall was Oxford House in 1884, which retained strong ties to its denominational foundation, maintaining a spiritual influence in its social agenda. Later the Passmore Edwards Settlement, now the Mary Ward House, worked to establish London’s first playhouse and its first school for disabled children while Britain’s Bermondsey Settlement educated young children in the art of dance and folksong. In 1887, Britain’s first Women’s Settlement was established, the Women’s University Settlement, later Blackfriars, in aims to promote the social welfare and independence of women through education and recreation. London’s Kingsley Hall, established in 1915, by Muriel and Doris Lester, opted to meet the needs of Britain’s youngest population, devising certain programs for children and young people of all ages.

The American Settlement Movement, an extension of the British Settlement Movement, also grew out of a deep concern for the nation’s poor. Unsanitary conditions which marked the already overcrowded cities of the United States threatened not only the health of the urban poor but the health of the entire industrial population. In addition, prevalent poverty and discontent also showed to threaten American civic life. In response to the conditions of the late nineteenth century, many American progressives believed the establishment of social settlements throughout the U.S. would help to alleviate squalid living conditions and help to avoid later social upheaval.

The movement began with the founding of the Neighborhood Guild by Americans Charles B. Stover and Stanton Coit, an early visitor to London’s Toynbee Hall. In 1886, Stover, former Park Commissioner of New York City, joined with Coit, a lecturer at the West London Ethical Society, to form the United States’ first settlement organization on the Lower East Side of New York City. The founding of the Neighborhood Guild, later the University Settlement, was followed by the 1889 founding of Jane Addams’ Hull House, the first U.S. settlement house established on Chicago’s West Side.

Following the founding of Hull House, American educator Jane E. Robbins opened in the same year the College Settlement of New York City, which was followed in 1891, by the founding of Andover House, later the South End House, in Boston, Massachusetts, by former Toynbee resident Robert A. Woods. In 1893, philanthropist Lillian Wald founded one of America’s largest settlement houses, New York’s Henry Street Settlement. In 1895, John Lovejoy Elliott, a young man greatly influenced by the growing settlement house and Ethical Culture movements, planted the seed for what became Hudson Guild, organizing the “Hurly Burlies,” a social and recreation club for young men in the Chelsea neighborhood. In the next few years, he established numerous clubs and programs for other groups, including young boys, young girls, working women, and families. Elliott's disparate programs merged to form Hudson Guild in 1897.

By 1900, there were more than one hundred settlement houses established throughout the United States. In 1919, the United Neighborhood Houses of New York would be founded to unify the more than thirty-five settlement houses then present within the city. This concept was further extended in the 1930s, by the Catholic Worker Movement founded by social activist, Dorothy Day.

In their earliest years, American settlement houses often worked on the behalf of exploited industrial workers and new immigrants. Much of their interest was directed toward the regulation of child labor, the creation of a juvenile court system, and the establishment of mother’s pensions and Workers' compensation.

In the 1870s, the settlement movement reached parts of France through the founding of the Centres Sociaux. The late 1880s saw the spread of the settlement movement to Canada where Toronto’s Fred Victor Mission and Vancouver’s Alexandra Community Activities society aimed to improve the living and workplace conditions of urban industrial workers. Similar settlements appeared in Amsterdam amid the 1890s including Ons Huis, Toynbee Associations, and the Volkshuis.

The first settlement house in Japan was founded in 1897, in Tokyo, and named Kingsley-Kan after London’s Kingsley Hall. The movement would spread quickly in response to a post World War II influx of industrial workers to the country’s largest cities. By 1926, Japan had established more than 40 settlement houses throughout the country. Later settlement houses would also appear throughout regions of Germany, Austria, and Hungary, and would include various Jewish Settlements that promoted Jewish political and social affairs throughout areas affected by World War II.

Though numbers have declined, social settlements continue to serve as community-focused organizations and provide a range of services in generally under-served urban areas. Certain services offered by contemporary settlement houses include informal family counseling and home visits, the sponsoring of social clubs, classes, recreational activities, or special interest groups, and the employment of certain professionals such as social workers, psychologists, psychiatrists, or home economists to meet more specialized needs. As such, many contemporary settlement houses are staffed by professional employees rather than students, and may no longer require that employees live alongside those they serve.

East Side House Settlement is a Non-profit organization located in the Mott Haven section of the South Bronx. It has served the Mott Haven section of the Bronx since 1963, and continues to maintain an emphasis on programs serving children and families. Originally founded in 1891, as a settlement house on New York's Upper East Side, in 1963, the organization moved to its current South Bronx location, with a staff of more than 200.

Henry Street Settlement was founded in 1893, by nurses Lillian Wald and Mary Maud Brewster in Manhattan's Lower East Side. It continues to provide services to residents of the Lower East Side, and offers programs in 11 facilities including the Abrons Arts Center. Programs include arts classes for children and adults, shelter services, health services, senior services, a workforce development center, day care centers, and after school summer and youth programs.

Hudson Guild is a multi-service, multi-generational, community-based organization rooted in and primarily focused on the Chelsea neighborhood of Manhattan, New York. Hudson Guild was founded in 1895, by John Lovejoy Elliot who was inspired by the American settlement movement taking place. More than one hundred years later, through a variety of programs and services including after-school care, professional counseling and community arts, the Guild continues to empower more than 11,000 individuals, particularly those in economic need, to achieve their highest potential.

Since its founding, the Guild has advocated for anti-poverty programs, including Neighborhood Youth Corp, VISTA, and Head Start (1966); worked with the City of New York to merge Head Start and daycare in New York City (1993); founded the Chelsea Community-Supported Agriculture co-op (2000); and successfully advocated for affordable housing inclusion in West Chelsea redevelopment plans (2005).

Oxford House in Bethnal Green is a community and art center in East London. Established in 1884 as the first university "settlement," it was built as a home for graduates, tutors, and those intending to enter the church, so that they could learn at first hand about the problems of disadvantaged areas and provide practical support for the local community.

It is currently involved in a variety of youth, immigration, arts, and community services offered in a venue that includes space for dance, theater, an art gallery, chapel, and meeting rooms. The center designed to encourage a sense of community in a diverse society and to work in partnership with groups and individuals to develop their potential.

The Stanton Street Settlement is a non-profit community organization based in Manhattan, whose mission it is to provide a safe, caring, tuition-free environment where children from New York City's Lower East Side can develop their minds, bodies, and spirits. The settlement, founded in 1999, continues the tradition of past settlement organizations at 53 Stanton Street. It is a flexible, grass-roots, all volunteer program designed to respond to the specific needs of the community. The organization currently serves approximately 35 students ages 5 to 16 with the help of 25 volunteer tutors and teachers.

Retrieved from https://www.newworldencyclopedia.org/p/index.php?title=Settlement_movement&oldid=1098039
Categories:
Hidden category:
This page was last edited on 26 January 2023, at 10:06.
Content is available under Creative Commons Attribution/Share-Alike License; additional terms may apply. See Terms of Use for details.