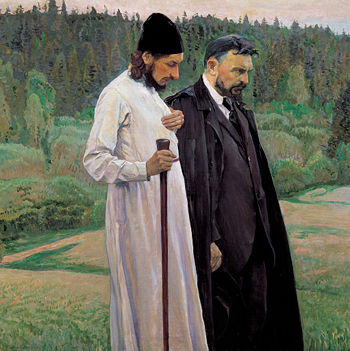 Sergey Nikolayevich Bulgakov or Sergei Nikolaevich Bulgakov (Russian: Сергей Николаевич Булгаков, June 16, 1871 O.S., Livny - July 12, 1944, Paris) was a Russian Orthodox theologian, philosopher, and economist. In light of the ideological struggles in early twentieth-century Russia, Bulgakov's evolution from Marxism, to Idealism, to the Christian faith is a significant development in the life of a prominent intellectual figure. His thoughts provided an alternative vision, as opposed to communism, for the integration of Christian ideology into Russian politics and society.

Sergei Bulgakov was born to the family of an Orthodox priest in the town of Livny, Oryol Gubernia on June 16, 1871. He studied at Orel seminary, then at Yelets gymnasium. In 1894, he graduated from the Law School of Moscow University, where he had also undertaken a serious study of political economy.

During his study at the seminary, Bulgakov became interested in Marxism and took part in the Legal Marxism movement. Studying Marxism, Bulgakov eventually became convinced of the impotence of this theory. Under the influence of works of Russian religious thinkers (Leo Tolstoy, Fyodor Dostoevsky, Vladimir Solovyov, etc.), in the course of his meetings and arguments with Leo Tolstoy he re-discovered his religious beliefs. He wrote a book about his evolution (Sergey Bulgakov, From Marxism to Idealism, 1903).

Such an evolution was common for the Russian intelligentsia of the time, and he soon became one of their recognized ideologists. A primary contributor to the books Problems of Idealism (1902), Vekhi, Problems of Religion, About Vladimir Solovyev, About Religion of leo Tolstoy, Religion of Solovyov's Philosophical Society, he participated in the journals New Way (Новый Путь) and Questions of Life (Вопросы Жизни). He was a leader of the publisher Way (1911-1917), where he printed many important works of contemporary Orthodox Theology.

In 1906, he was elected as an independent Christian Socialist to the Second Duma. He published the important original monographs Philosophy of Economy («Философия хозяйства» 1912) and Unfading Light («Свет Невечерний» 1917), in which he first offered his own teaching based on the combination of sophiology of Vladimir Solovyov and Pavel Florensky, the later works of Schelling, and his own intuition-based ideas about the Orthodox faith.

When he returned to the Russian Orthodox Church, he was ordained into the priesthood (1918), and rose to prominence in church circles. He took part in the All-Russia Sobor of the Orthodox Church that elected patriarch Tikhon of Moscow. Bulgakov rejected the October revolution and responded with On the Feast of the Gods ("На пиру богов," 1918), a book similar to the Three talks of Vladimir Solovyov.

During the Russian Civil War he was in Crimea, where he worked in the field of philosophy. He wrote the books Philosophy of the Name ( "Философия имени," 1920) and Tragedy of Philosophy ("Трагедия философии," 1920) in which he revised his views about the relation of Philosophy to Dogmatism. He concluded that the Christian views can be expressed only by dogmatic theology. Thereafter, his works were devoted to dogmatic theology.

On December 30 1922, the Bolshevik government expelled some 160 prominent intellectuals on the so-called Philosophers' ship, including Bulgakov, Nikolai Berdyaev, and Ivan Ilyin.

In May, 1923, he became professor of Church Law and Theology at the school of law of the Russian Research Institute in Prague. In 1925 he helped found l'Institut de Théologie Orthodoxe Saint-Serge. He was the head of this institute and Professor of Dogmatic Theology until his death from throat cancer on July 12, 1944. His last work was devoted to a study of the Apocalypse.

Sergei Bulgakov was an enthusiastic follower of Aleksey Khomyakov's ecumenistic idea of Union between the Russian Orthodox Church and the Anglican church. He was one of the founders of the Anglican-Orthodox ecumenical Fellowship of Saint Alban and Saint Sergius, devoted to the establishment of such a Union.