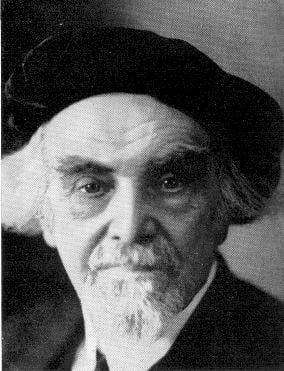 Nikolai Alexandrovich Berdyaev (Николай Александрович Бердяев) (March 18, 1874 – March 24, 1948) was a Russian religious and political philosopher. He was often referred to as a Christian existentialist, though his thought differs in significant ways from the existentialism of Jean-Paul Sartre as well as other existential thinkers. Nevertheless, Berdyaev embraced key existential ideas, particularly that of freedom. For him freedom was the fundamental metaphysical reality upon which all else is based. From the primary notion of freedom he developed his own existential interpretation of ultimate truth in terms of subjectivity rather than objectivity. In doing this, he offered a critique of modern rationalism and instead vigorously defended the intrinsic value of the human person and the creative life of the spirit.

Berdyaev was born in Kiev on March 18, 1874 into an aristocratic, military family. He spent a solitary childhood at home, where his father's library allowed him to read widely. In fact, when only fourteen years old he read works by the great German philosophers Hegel, Schopenhauer, and Kant. He also excelled in languages.

In 1894 Berdyaev entered Kiev University to study law. This was a period of revolutionary fervor among both the intelligentsia and students, and Berdyaev soon became involved in Marxism. In 1898 he was arrested in a student demonstration and expelled from the university. Although Berdyaev would study at other universities, he never earned a degree. He was later involved in illegal activities and this led to three years of internal exile in central Russia—a mild sentence compared to the penalties faced by many other revolutionaries. It was while in exile that he wrote his first book in which he began to move from the socialist ideas of Marxism to a more existential personalism.

In 1904 Berdyaev married Lydia Trusheff and the couple moved to St. Petersburg, the Russian capital and center of intellectual and revolutionary activity. There Berdyaev participated fully in intellectual and spiritual debate, eventually departing from radical Marxism in order to focus his attention on philosophy and religion. Although Berdyaev was a believing Christian, he was often critical of the institutional church. In fact, a fiery 1913 article criticizing the Holy Synod of the Russian Orthodox Church caused him to be charged with the crime of blasphemy, the punishment for which was exile to Siberia for life. The emergence of World War I and the Bolshevik Revolution, however, prevented his case from coming to trial.

Although still embracing aspects of socialism, Berdyaev could not accept the Bolshevik regime because of its authoritarianism and the domination of the state over the freedom of the individual. Yet, he accepted the hardships of the revolutionary period, as he was permitted to continue to lecture and write. But in 1922 the Bolshevik government expelled from Russia over a hundred prominent intellectuals, and Berdyaev was among them. At first Berdyaev and other émigrés went to Berlin, but economic and political conditions in Germany caused many of them, including Berdyaev and his wife, to move to Paris in 1923. There he founded an academy where he taught, lectured, and wrote, while working to promote the exchange of ideas with the French intellectual community. During the German occupation of France Berdyaev continued to write. Many of his books were published after the war and some following his death. In the years that he spent in France, Berdyaev wrote fifteen books, including most of his most important works. He died at his writing desk in his home in Clamart, near Paris, on March 24, 1948.

The thought of Berdyaev has often been called a “Christian existentialism.” Although in his youth he embraced Marxist ideology, he later abandoned it because it led, he thought, to a totalitarianism that restricted the freedom and reduced the value of the individual. Instead, he returned to the religious faith of the Russian Orthodox Christianity in which he was raised. And yet, here too he rejected the more authoritarian and dogmatic aspects of the doctrine. Indeed, like other existential thinkers (or “philosophers of existence”) Berdyaev held freedom to be of the utmost significance. In fact, for him, even more than some other existential thinkers, freedom was the essential term within his philosophy. For him, freedom was the basic or ultimate metaphysical reality. Prior to everything else, and as the basis or “ground” of everything else, there is freedom. Freedom, then, is the “groundless ground.” It is the “first principle” of everything (being), but not as an explanatory cause of all being (as in traditional metaphysics), but more as the ultimate source, the reality which one discovers if one plunges deeply enough into existence itself. So while the existentialism of Sartre proclaims that “existence precedes essence” (which means that prior to our rational explanations there is only brute existence), Berdyaev proclaims, “freedom precedes existence.”

In order to understand more fully Berdyaev’s notion of freedom as the ultimate reality, we should not confuse his notion with the traditional idea of “free-will.” In the traditional understanding freedom is merely a capacity of an agent or subject who is able (free) to choose between various options or possibilities, and so between good and bad or right and wrong. But if this were the case, the subject or agent as a (moral) being would come first and the freedom as a power or will (i.e., “will-power) would come second and so would derive from it. Or, in other words, existence (of the agent or subject) would precede freedom (the power to choose). But in Berdyaev’s philosophy the relation is reversed. Freedom is the very basis or ground not only of individuals’ existences, but of all existence, that is, the entire universe. Here we can see the influence of religion in Berdyaev’s philosophy and why it has been called a “religious philosophy.” According to Berdyaev, the universe itself and everything in it is derived from God’s freedom to create. Without this primordial freedom (of God) there would be nothing. Here then, "religion" should be understood less as a system of doctrinal beliefs, and more as the free and creative life of the spirit.

Because Berdyaev’s philosophy was essentially a spiritual one, he believed that in order to attain the ultimate truth of this reality, one had to experience it firsthand or for oneself. For this reason, he distinguished two kinds of truth: An “objective” one and a "subjective" one. Objective truth is the knowledge we attain through reason and its logic, concepts, and ideas. Although he believed this knowledge was possible and even to a certain extent “true,” the knowledge or truth that is attained through reason is fundamentally flawed. It is a knowledge that tries to control and stabilize the ultimate reality into “necessary truths.” This kind of truth belongs to science and technology. It seeks to know the necessary truths of objective reality in order to manipulate it and dominate it. But since the ultimate reality, as we have seen, is freedom, it is by definition not necessary but free. Since objective reason always searches for that which is necessarily true, it cannot grasp this ultimate and more fundamental truth of reality.

Freedom, then, can only be attained subjectively. Only in the inner depths of one’s being can one discover its truth. Again, reason always disengages itself from the reality that is to be known in order to objectify it. But to grasp freedom one must move in precisely the opposite direction. One must engage it within one’s whole being. In this way, one participates in the very mystery of existence, “knowing” not through the casual explanations of conceptual reason, but in its inner depths. For this reason, Berdyaev claimed that “objective reality” does not really exist; it is a mere “illusion of our minds” because what really exists is our objectification of reality. Or, in other words, the “objective reality” is what we create.

Thus, from these notions of freedom and subjectivity Berdyaev developed his understanding of truth as creativity. In embracing freedom at the heart of existence we become free to create as God creates, that is, “out of nothing.” Here Berdyaev flirts with apostasy (at least in terms of Christianity) in claiming that humans too can create ex nihilo (out of nothing). What he means, though, is that although we as humans must use certain materials in whatever we create, we are not merely remaking or mimicking something already done, but are literally bringing something entirely new or original into the world. Moreover, Berdyaev does not merely limit his notion of creation to art, but opens it to all dimensions of human existence. In our thoughts, our actions, our relationships, we can embrace the freedom that is at the heart of existence and in doing so create something new. In fact, whenever the spiritual reality, which is created, becomes actualized in some outward or material form (as in an artwork, for instance), it actually loses some of its spiritual force or energy. The truth of that dynamic energy of the spirit is really only “known” inwardly.

Given Berdyaev’s distinction between the truth known by reason alone and the truth of the spirit embraced in the inwardness of one’s whole being, we can see why he critiqued the rationalism of Descartes and Kant for being too lifeless or “bloodless.” For if one’s whole being must embrace this ultimate reality of freedom, then the emotions and passions are likewise involved. Berdyaev’s emphasis on the subjectivity of the individual as opposed to the objectivity of pure reason led to his philosophy being criticized as too individualistic. Berdyaev, however, preferred the term “personalist,” and argued that in all philosophies the personality of the philosopher is clearly apparent, even when so many philosophers do their best to hide it behind their logical arguments. In contrast, Berdyaev insisted that the creativity of the person should not be stifled but be given free reign. Furthermore, he did not view his philosophical personalism as individualistic in the sense of being self-enclosed. Rather, at its heart, the human person is communal and so in embracing the freedom of existence a person is not free to choose whatever he or she wants but rather creates new things along with and for others. In doing so, one helps to transform or re-create the world, oneself, and others.

Retrieved from https://www.newworldencyclopedia.org/p/index.php?title=Nikolai_Berdyaev&oldid=1087439
Categories:
Hidden category:
This page was last edited on 15 November 2022, at 04:06.
Content is available under Creative Commons Attribution/Share-Alike License; additional terms may apply. See Terms of Use for details.