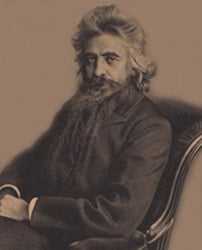 Solovyov did not think of himself as a philosopher, but as a prophet whose discoveries would bring about universal regeneration. He believed that Western philosophy and civilization had reached the high point of its development, and that the Russian nation had a mission to initiate a new cultural age by uniting the Roman Catholic and Eastern Orthodox churches in a theocracy governed by the Pope and the Tzar. He taught that development was a progression from primitive unity through differentiation to a higher reintegration. He also asserted that the physical world was undergoing a process of reintegration which required the establishment of “all-unity,” the reuniting of the physical world with God in a kingdom of heaven on earth. Solovyov influenced the religious philosophy of Nikolai Berdyaev, Sergey Bulgakov, Pavel Florensky, Semyon Frank, the ideas of Rudolf Steiner and also had an impact on the poetry and theory of the young symbolist poets, especially Andrei Belyi and Alexander Blok.

Vladimir Solovyov was born January 16, 1853, in Moscow, Russia, the son of Mikhaylovich Solovyov (1820-1879), a professor at Moscow University and a well-known Russian historian. His mother, Polixena Vladimirovna, belonged to a Ukrainian-Polish family, and was the descendant of a remarkable thinker—the eighteenth century, Hryhori Skovoroda (1722 - 1794). Vladimir attended secondary school in Moscow. In 1869, he entered the university and began his studies in natural science, with a particular interest in biology. At the age of thirteen, he had renounced his Orthodox faith and embraced materialism. During his first three years at the university, he became increasingly disinterested in natural science, and enrolled as an auditor in the Historical-Philosophical Faculty, earning a degree in June 1873.

During 1872, Solvyov returned to his Orthodoxy, and from 1873–1874 he attended lectures at the Moscow Ecclesiastic Academy. He began writing his magister’s dissertation, and published several chapters of it in a Russian theological journal even before he formally defended it in December of 1874. He was named a docent in philosophy and enthusiastically took up his duties, but within a few he months applied for a scholarship to do research abroad, particularly in London’s British Museum. He remained in England for several months, and wrote his mother that he was planning to return to Russia the following summer. He abruptly changed his plans, and just one month later he wrote his mother that his work required him to go to Egypt via Italy and Greece. Some believe that he suddenly changed plans because of a mystical experience he had while sitting in the reading room of the British Museum.

The following year Solovyov returned to Russia and taught philosophy at Moscow University. He began work on an unfinished text now known as the Philosophical Principles of Integral Knowledge. Early in 1877, Solvyov became disillusioned with university politics, gave up his position, and moved to St. Petersburg, where he accepted employment in the Ministry of Public Education. He began work on a doctoral dissertation, and gave a successful series of lectures at St. Petersburg University, later published as Lectures on Divine Humanity. In 1880 he received his doctorate.

In March of 1881, Solovyov, then twenty-eight years old, was lecturing on Slavophile themes to a large audience in St. Petersburg when, towards the end of the lecture, he mentioned the six members of the terrorist organization Narodnaya Volya (The People’s Will), then on trial for the assassination of Alexander II. He told the audience that the regicide presented the new tsar with the "unprecedented opportunity to affirm the Christian principle of all-forgiveness" by pardoning the assassins of his father. According to observers, students in the audience responded with shouts of "bravo," apparently interpreting his words as an endorsement of the radical movement, and older members of the audience shouted at him angrily. Solovyov felt compelled to return to the podium in order to avoid misunderstanding. He explained that his point was only that a Christian state should not employ the death penalty. However, the speech caused a scandal and was brought to the attention of the authorities, including the Minister of the Interior and Tsar Alexander III himself. The Tsar, who knew that the young man had a good reputation among conservative nationalist circles, and was the son of the late historian Sergei Solovyov, who had been his tutor, only reprimanded Solovyov for "inappropriate opinions" and temporarily stopped him from lecturing. This incident marked a turning point in Solovyov’s career. He resigned from his university post, and became an independent scholar and publicist. The lecture also marked the beginning of his break with Slavophile and conservative nationalist circles and his association with liberal intellectuals. Finally, the speech represented his first public stand in favor of what he came to call "Christian politics."

For the remainder of the 1880s, Solovyov concerned himself with themes of little interest to contemporary Western philosophy, involving himself in efforts to unite Eastern Orthodox and Roman Catholic churches and realize what he considered to be the historical mission of Russia as a theocratic kingdom under the Pope and the Russian czar. In the 1890s he returned to the traditional issues of philosophy, ethics and epistemology in particular. His studies on the latter were left incomplete by his premature death in 1900 at the age of forty-seven. Solovyov is said to have died a homeless pauper. At the time of his death, Solovyov, together with his younger brother, was also preparing a new Russian translation of Plato's works.

Vladimir Solovyov is considered to be the greatest Russian philosopher of the nineteenth century. His first works helped to initiate a revolt against positivism in Russian thought; this was followed by a revival of metaphysical idealism and finally by the Religious-Philosophical Renaissance of the early twentieth century. Solovyov was Russia’s first professional academic philosopher, in contrast to the Russian idealists of the romantic period. He created the first complete philosophical system, initiating a transition among Russian thinkers to the construction of integrated systems of thought. Solovyov was critical of Western empiricism and idealism for attributing absolute significance to partial insights and abstract principles. He followed the Russian intellectual tradition of avoiding purely theoretical speculation, insisting that philosophical theory must be integrated with religion and social practice. He did not consider himself an academic philosopher, but a prophet whose discoveries would bring about universal regeneration.

Solovyov believed that his mission in life was to move people toward reconciliation or absolute unity (sobornost). Solovyov embraced the Hegelian concept of historical development. His first book, “The Crisis of Western Philosophy,” claimed that philosophy, as a body of abstract, purely theoretical knowledge, had completed its development and become an “artifact;” that the pursuit of such knowledge was no longer relevant; and that it would now take an “empirical” direction, using the knowledge already acquired in a new way to resolve the problems which philosophy had been unable to clarify.

Solovyov saw economic socialism, positivism and utilitarian realism as the highest point of Western civilization and the final stage of its development. However, according to "an incontestable law of development," Western civilization represented only a second, transitional phase in human development. The next, final stage, characterized by freedom from all one-sidedness and elevation over special interests, was already manifested as a "tribal character" of the Slavic peoples and, in particular, of the Russian nation. Solovyov believed that Russia had a special mission in universal history and would play a key role in the establishment of an ideal society. For this reason he was interested in the ideas of the Slavophiles during his early intellectual career, and established close ties with the Pan-Slavic circle of Ivan Aksakov. As he developed his ideas on “Christian politics,” he came to realize that Slavic nationalism was an obstacle to the unification of the Eastern Orthodox Church with the Roman Catholic Church. In the early 1880s he distanced himself from the Slavophiles and associated with liberal circles. In 1883 he became a contributor to the liberal and Westernizing Vestnik Evropy (European Messenger). He believed that Russia must acknowledge the primacy of the Pope in order to fulfill is mission and establish the Kingdom of God on earth, a theocracy with the Pope and the Tsar at its center. Though he insisted he had never abandoned the Orthodox faith, Solovyov converted to Roman Catholicism four years before his death, apparently to engage in the reconciliation between the Eastern Orthodox Church with the Roman Catholic Church.[1]

Solovyov advocated a synthesis of Eastern and Western Churches in his book Russia and the Universal Church (written in French in 1889, translated into English in 1948). The imminent coming of the Antichrist was the theme of his last book Three Dialogs on War, Progress, and the End of History (1899, translated in 1915).

In the 1890s Solovyov became less optimistic about the realization of his ideal, and turned to more conventional philosophical issues such as ethics and epistemology. Ethics became a dialectical problem of basing the morality of human acts and decisions on the extent of their contribution to the world's integration with ultimate divine unity, a theory expressed in his The Meaning of Love (1894).

Influenced by German idealism, Solovyov conceived of development as a progression from primitive unity through differentiation to a higher reintegration. The physical world of spatio-temporal objects came into existence when Sophia, or Divine Wisdom, separated from God. Reintegration required the establishment of “all-unity,” the reuniting of the physical world with God in a kingdom of heaven on earth. Assuming the ultimate unity of Absolute Being, Solovyov proposed that the world was undergoing a process of reintegration.

In a series of lectures at St. Petersburg University in 1880, later published as Lectures on Divine Humanity, Solovyov developed his concept of "Godmanhood." He suggested that the unique intermediary between the world and God could only be man, because man is the only vital part of nature capable of knowing and manifesting the divine idea of “absolute unitotality” in the chaotic multiplicity of real experience. The perfect revelation of God, he said, was Christ's incarnation in human nature.

Solovyov believed in the incarnation of Divine Wisdom in a being called Saint Sophia, a concept that greatly influenced the young symbolist poets, especially Andrei Belyi and Alexander Blok, Solovyov's nephew. His best known mystical poem is "Three Meetings" (1899), which describes his visions of sophia, sapience, wisdom. Solovyov was also deeply involved in the political writings and literary criticism of his day. He had an effect on the religious philosophy of Nicolas Berdyaev, Sergey Bulgakov, Pavel Florensky, Semyon Frank, and on the ideas of Rudolf Steiner.

Vladimir Solovyov was known to be a very close friend and confidant of Fyodor Dostoevsky, who was deeply impressed by the philosopher. It is widely held that Solovyov is the basis of the character Alyosha Karamazov from The Brothers Karamazov.[2] Solovyov's influence can also be seen in the writings of the Symbolists and Neo-Idealists of the later Russian Soviet era. His book The Meaning of Love is seen as one of the philosophical sources of Leo Tolstoy's 1880s works, The Kreutzer Sonata (1889).