Saint Catherine's Monastery (Greek: Μονὴ τῆς Ἁγίας Αἰκατερίνης) is one of the oldest continuously functioning Christian monasteries in the world located on the Sinai Peninsula, at the mouth of an inaccessible gorge at the foot of Mount Sinai in Egypt. The monastery was built by order of Emperor Justinian I between 527 and 565 C.E., enclosing the Chapel of the Burning Bush previously built by Helena, the mother of Constantine I, at the site where Moses allegedly saw the burning bush. The monastery is run by the Greek Orthodox Church and it is classified as a UNESCO World Heritage Site. The full, official name of the monastery is, The Sacred and Imperial Monastery of the God-Trodden Mount of Sinai.

The site is also respected by Islam. According to the Charter of Privileges, a document in the possession of the monastery purportedly signed by Prophet Muhammad himself, Muhammed gave his protection to the monastery. A Fatimid mosque was built within the walls of the monastery, but has never been used since it is not correctly oriented towards Mecca.

The Monastery of St. Catherine straddles the foot of both Mount Sinai and Mount Catherine, and is located at an elevation of around 1200 meters. The monastery was named after St. Catherine of Alexandria whose relics were purported to have been miraculously transported there by angels. Catherine of Alexandria was a Christian martyr initially sentenced to death on the Breaking wheel. However, when this failed to kill her, she was beheaded, and according to Christian tradition, angels took her remains to Mount Sinai. The site became a favorite pilgrimage destination among Christians. 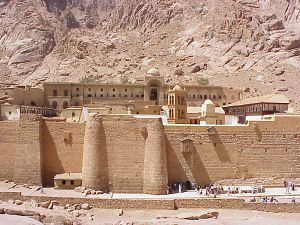 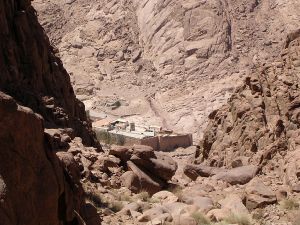 View down to the Monastery of St. Catherine from the trail to the summit.

The exact location of Mount Sinai has been debated for centuries and many mountains have been identified as this biblical site. In the first few centuries following Jesus' death, a number of Christian hermit monks settled on Mount Serbal, considering it to be the biblical Mount Sinai, and in the 300s C.E. they built a monastery there at its base.[1] However, Josephus had stated that Mount Sinai was the highest of all the mountains thereabout,[2] which would imply that Mount Catherine was actually the mountain in question if Sinai was to be sited on the Sinai Peninsula at all.[3] Local Bedouin tradition considered Jabal Musa, which lies adjacent to Mount Catherine, to be the biblical mountain,[4] and it is this mountain that local tour groups and religious groups presently advertise as the biblical Mount Sinai. However, the most common location is identified as Mount Horeb at 2,285 meters, found across from Mount St. Catherine, the tallest peak in the Sinai.[5] In certain biblical passages, these events are described as having transpired at Mount Horeb, but though there is a small body of opinion that Sinai and Horeb were different locations,[6] they are generally considered to have been different names for the same place. According to Bedouin tradition, Jebel Musa ("Moses Mountain"), also called Mount Sinai, is the mountain where God gave laws to the Israelites. However, the earliest Christian traditions place this event at the nearby Mount Serbal, and a monastery was founded at its base in the fourth century; it was only in the sixth century that the monastery moved to the foot of Mount Catherine, in response to Josephus' earlier claim the mountain should be the highest in the area. Jebel Musa, which is adjacent to Mount Catherine, was only equated with Sinai by Christians after the fifteenth century. The intended location would obviously have been known at some point, and the Elijah narrative appears to suggest that when it was written, the location of Horeb was still known with some certainty, as Elijah is described as traveling to Horeb on one occasion,[7] but there are no later biblical references to it that suggest the location remained known; Josephus only specifies that it was within Arabia Petraea, and the Pauline Epistles are even more vague, specifying only that it was in Arabia, which covers most of the southwestern Middle East.

The oldest record of monastic life at Sinai comes from the travel journal written in Latin by a woman named Egeria about 381-384 C.E. She visited many places around the Holy Land and Mount Sinai, where, according to the Hebrew Bible, Moses received the Ten Commandments from God.[8]

The monastery was built by order of Emperor Justinian I between 527 and 565, enclosing the Chapel of the Burning Bush previously built by Helena, the mother of Constantine I, at the site where Moses is supposed to have seen the burning bush; the living bush on the grounds is purportedly the original.

During the seventh century, the isolated Christian anchorites of the Sinai were eliminated: only the fortified monastery remained. The monastery is still surrounded by the massive fortifications that have preserved it. Until the twentieth century, access was through a door high in the outer walls. From the time of the First Crusade, the presence of Crusaders in the Sinai until 1270 spurred the interest of European Christians and increased the number of intrepid pilgrims who visited the monastery. The monastery was supported by its dependencies in Egypt, Palestine, Syria, Crete, Cyprus and Constantinople. 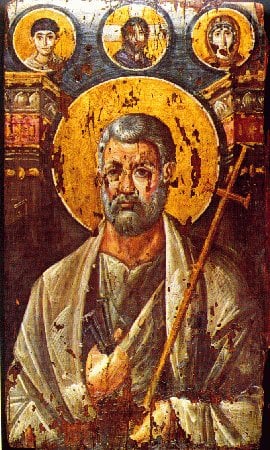 St. Catherine's Monastery possesses some of the earliest icons in existence, including this sixth-century hot wax icon.

The monastery library preserves the second largest collection of early codices and manuscripts in the world, outnumbered only by the Vatican Library. Its strength lies in Greek, Coptic, Arabic, Armenian, Hebrew, Georgian, and Syriac texts. The Codex Sinaiticus, now in the British Library, left the monastery in the nineteenth century for Russia, in circumstances that are now disputed.[9]

The complex houses irreplaceable works of art: mosaics, the best collection of early icons in the world, many in encaustic, as well as liturgical objects, chalices and reliquaries, and church buildings. The large icon collection begins with a few dating to the 5th (possibly) and 6th centuries, which are unique survivals, the monastery having been untouched by Byzantine iconoclasm, and never sacked. The oldest icon on an Old Testament theme is also preserved there. A project to catalogue the collections has been ongoing since the 1960s.

The monastery along with several dependencies in the area constitute the entire Orthodox Church of Mount Sinai, headed by an archbishop, who is also the abbot of the monastery. The exact administrative status of the church within Eastern Orthodoxy is ambiguous: by some, including the church itself,[10] it is considered autocephalous,[11] [12] by others an autonomous church under the jurisdiction of the Greek Orthodox Church of Jerusalem.[13] The archbishop is traditionally consecrated by the Orthodox Patriarch of Jerusalem; in recent centuries he has usually resided in Cairo. At the time of publication in 1982, Weitzman stated that the Orthodox Church of Mount Sinai is in communion with both the Eastern Orthodox churches and with the Roman Catholic Church.[14] During the period of the Crusades, marked by bitterness between the Orthodox and Catholic churches, the monastery was patronized by both the Byzantine Emperors and the rulers of the Kingdom of Jerusalem, and their respective elites. The monastery was an important centre for the development of the hybrid style of Crusader art, and still retains over 120 icons created in the style, by far the largest collection in existence. Many were evidently created by Latins, probably monks, based in or around the monastery in the thirteenth century.[15]