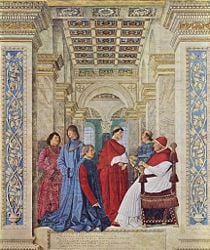 The Vatican Library (Latin: Bibliotheca Apostolica Vaticana) is the library of the Holy See, currently located in Vatican City. It is one of the oldest libraries and contains one of the most significant collections of historical texts including Codex Vaticanus, one of the oldest extant manuscripts of the Bible. Formally established in 1475, though in fact much older, it has 75,000 codices from throughout history and 1.6 million printed books.

The library was created based on Pope Nicholas V's vision of a new Rome with extensive public works that would lure pilgrims and scholars alike to the city. Today the Vatican Library is a significant research library for history, law, philosophy, science, and theology. It is open to anyone who can document their qualifications and research needs.

Scholars have traditionally divided the history of the library into five periods.[1]

Pope Nicholas V (1447-1455) established the library in the Vatican in 1448 by combining some 350 Greek, Latin, and Hebrew codices inherited from his predecessors with his own collection and extensive acquisitions, among them manuscripts from the imperial library of Constantinople. The Biblioteca Apostolica Vaticana was established in 1475.[2]

When its first librarian, Bartolomeo Platina, produced a listing in 1481, the library held over 3500 items, making it by far the largest in the Western world. Around 1587, Pope Sixtus V commissioned the architect Domenico Fontana to construct a new building for the library; it is still in use today. Books were displayed on benches to which they were chained. 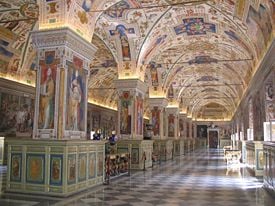 The Sistine Hall of the Vatican Library.

The library was enriched by several bequests and acquisitions over the centuries.

In 1623, the Palatine Library of Heidelberg containing about 3500 manuscripts was given to the Vatican by Maximilian I, Duke of Bavaria (who had just acquired it as booty in the Thirty Years War) in thanks for the adroit political maneuvers of Pope Gregory XV that had sustained him in his contests with Protestant candidates for the electoral seat. A token 39 of the Heidelberg manuscripts were sent to Paris in 1797 and were returned to Heidelberg at the Peace of Paris in 1815, and a gift from Pope Pius VII of 852 others was made in 1816, including the Codex Manesse. Aside from that, the Palatine Library remains in the Vatican Library to this day.

In 1657, the manuscripts of the Dukes of Urbino were acquired. In 1661 the Greek scholar Leo Allatius was made librarian. Christina of Sweden saw to it that her library, which was for all practical purposes the entire royal library of Sweden of the time, became part of the Vatican Library upon her death in 1689. 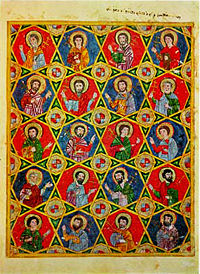 A miniature from the Syriac Gospel Lectionary (Vat. Syr. 559), created ca. 1220 near Mosul and exhibiting a strong Islamic influence.

Among the most famous holdings of the library is the Codex Vaticanus, the oldest known nearly complete manuscript of the Bible. The Secret History of Procopius was discovered in the library and published in 1623.

In order to make the vast contents of the Vatican Library accessible, in 1927 to 1930, librarians mostly from the United States, with funds from the Carnegie Endowment for International Peace, worked to classify and catalog the contents of the library. Microfilm records were made of most items.

The Vatican Library is a research library for history, law, philosophy, science and theology, open to anyone who can document their qualifications and their research needs to view the collection. Photocopies for private study of pages from books published between 1801 and 1990 can be requested in person or by mail.

A School of Library Science is associated with the Vatican Library.

From July 2007 the library was temporarily closed to the public for rebuilding.[5].

In March 2014, the Vatican Library began the project of digitizing its collection of manuscripts, to be made available online. 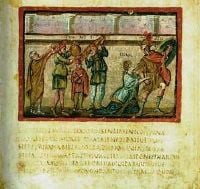 Folio 22r from the Vatican Virgil contains an illustration from the Aeneid of the flight from Troy. 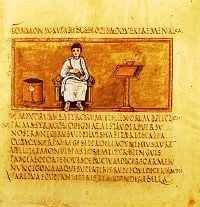 Folio 14 recto of the Vergilius Romanus contains an author portrait of Virgil. 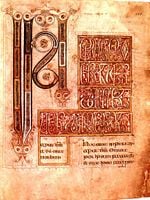 Folio 125r from the Barberini Gospels: The incipit to John. 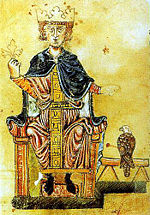 Frederick II and his falcon, from a late thirteenth century manuscript of De arte venandi in Biblioteca Vaticana, Pal. lat 1071) 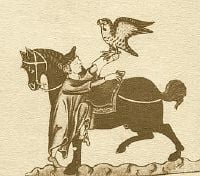 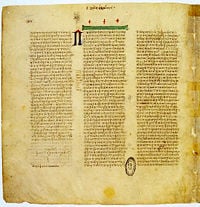 Notable manuscripts in the Library include:

The Vergilius Vaticanus (Vatican, Biblioteca Apostolica, Cod. Vat. lat. 3225, also known as the Vatican Virgil) is an illuminated manuscript containing fragments of Virgil's Aeneid and Georgics made in Rome in about 400 C.E.. It is one of the oldest surviving sources for the text of the Aeneid and is the oldest and one of only three illustrated manuscript of classical literature. The two other surviving illustrated manuscripts of classical literature are the Vergilius Romanus and the Ambrosian Iliad.

The Vergilius Romanus (Vatican City, Biblioteca Apostolica, Cod. Vat. lat. 3867), also known as the Roman Vergil, is a fifth century illuminated manuscript of the works of Virgil. It contains the Aeneid, the Georgics], and some of the Eclogues. It is one of the oldest and most important Vergilian manuscripts. It is 332 by 323 mm with 309 vellum folios. It was written in a rustic capitals with 18 lines per page.

The Barberini Gospels is an illuminated Hiberno-Saxon manuscript Gospel Book(Rome, Vatican City, Biblioteca Apostolica, Barberini Lat. 570, also known as the Wigbald Gospels), assumed to be of a late eighth century origin. After coming to light following its move to the Vatican Library in 1902 this luxury Gospel book had been largely ignored by the academic community until it became the subject of a doctoral dissertation in 2004. Earlier writing includes some brief comparisons of its iconography with that of its contemporaries and an inconclusive debate regarding the site of its production. There have also been speculations about a colophon, an entreaty for the reader to pray for one Wigbald and its role in providing a connection to a specific historical context.

The Joshua Roll is an illuminated manuscript, probably of the tenth century created in the Byzantine empire, according to many scholars by artists of the Imperial workshops in Constantinople.[6] It has heavy Greco-Roman influences and is rendered in grisaille. It is incomplete, dimensions of the surviving parts being 31 cm high and about 10 meters long.[7]

The Roll portrays the Old Testament Book of Joshua using a reduced version of the Septuagint text. It depicts the first 12 chapters, when Joshua was engaged in frequent and successful conquest[8] At roughly this time, the Byzantine empire was enjoying military success in its campaigns in the Holy Land. The art is by multiple artists, with the coloring added in a separate step later. The lettering is in majuscule and minuscule forms.[7] Curiously, the images are slanted at ten degrees, in a continuous frieze along the ten meters of the roll. Steven Wander, professor at the University of Connecticut, suggests this may be because the roll was a copy of the actual preparatory sketches or working drawings for a real column, possibly to scale, like the bronze Easter column (Latin 'colonna') for Bishop Bernward in Hildesheim.[9]

A copy of this book was written by Jean II Dampierre around 1300. An earlier European book on falconry was written by an anonymous noble of Vercelli in the tenth century.

Written between 1380 and 1400 in Dubrovnik as a transcript and transliteration from older texts composed in a mixture of Church Slavonic and čakavian idioms and written down in Glagolitic and Bosnian Cyrillic scripts, it retained a few phonological and morphological features found in the original manuscripts. The book contains the following parts: Offices of the Virgin Mary according to the rites of the Roman Church; seven penitentiary psalms; Offices of the Holy Cross; Offices for the dead; Offices of the Holy Spirit as well as numerous prayers. The script is the Roman Gothic, embroidered with luxuriantly outlined initials and miniatures. The name of the prayer book reflects the fact that it is held in the Vatican library. The text has become widely known from 1859, when influential Croatian historian Franjo Rački drew attention to it, but the first critical edition did not appear until the twentieth century when Croatian literary historian and philologist Franjo Fancev published the Vatican Croatian prayer book in 1934.

The Codex Vaticanus (The Vatican, Bibl. Vat., Vat. gr. 1209; Gregory-Aland no. B or 03) is one of the oldest extant manuscripts of the Bible. Probably it is slightly older than Codex Sinaiticus, both of which were probably transcribed in the 4th century. It is written in Greek, on vellum, with uncial letters.

Librarians of Vatican Library since 1830

The office of Librarian of Vatican Library has been held at the same time as that of Archivist of Vatican Secret Archives since 1957.

Retrieved from https://www.newworldencyclopedia.org/p/index.php?title=Vatican_Library&oldid=1036757
Categories:
Hidden category:
This page was last edited on 7 May 2020, at 06:48.
Content is available under Creative Commons Attribution/Share-Alike License; additional terms may apply. See Terms of Use for details.