This is a Chinese name; the family name is Soong.

Sòng Qìnglíng or Soong Ch'ing-ling (Simplified Chinese: 宋庆龄; Traditional Chinese: 宋慶齡; pinyin: Sòng Qìnglíng; Wade-Giles: Sung Ch'ing-ling) (January 27, 1893 – May 29, 1981), also known as Madame Sun Yat-sen, was one of the most prominent women in modern China and the wife of Sun Yat Sen, leader of the Revolution of 1911 and founder of the nationalist Kuomintang Party. Born in Nanshi, Shanghai, to a wealthy Methodist Christian family, she studied in the United States at Wesleyan College. She became personal secretary to Sun Yat Sen and married him in 1915, against her family’s wishes. After Sun's death from cancer, she was elected to the Kuomintang (KMT) Central Executive Committee in 1926. In 1926-27, she helped to prepare for the Northern Expedition against the Chinese warlords. In 1927, when Chiang Kai Shek betrayed the revolutionaries by ordering a massacre of communists, revolutionary intellectuals, and members of trade unions, she broke with the Kuomintang in favor of the Chinese communists, but never joined the Chinese Communist Party. She spent two years from 1927 to 1929 in Europe, enlisting support for China’s fight against Japanese occupation, and joined the Anti-Imperialist League headquartered in Belgium.

In September, 1949, when the Communists founded the People’s Republic of China, Soong was elected the Vice Chair of the People's Republic of China (now translated as "Vice President"). She also served as head of the Sino-Soviet Friendship Association and Honorary President of the All-China Women's Federation. Soong founded the China Welfare Institution, which provided relief for working people in Shanghai and now focuses on maternal and pediatric healthcare, preschool education, and other children's issues. In the early 1950s, she founded the magazine, CHINA RECONSTRUCTS, now known as CHINA TODAY and published monthly in six languages. On May 16, 1981, two weeks before her death, she was admitted to the Communist Party and was named Honorary President of the People's Republic of China. She is the only person ever to hold this title.

Sòng Qìnglíng was one of the three Soong sisters whose husbands were among China's most significant political figures of the early twentieth century. She was born January 27, 1893, in Nanshi (a part of present-day Huangpu District), Shanghai, to a wealthy Hakka Chinese family that had come from Wenchang County, on Hainan Island in southern China, and had converted to Methodist Christianity. Her father, Sung Yao-ju used the anglicized name Charles Jones Soong and had studied in the United States. He was a wealthy businessman and Christian minister who published Bibles and was a friend and a financial supporter of Sun Yat Sen’s Revolutionary Alliance (Tongmenghui).[1] Her Christian name was Rosamond. She attended Motyeire School for Girls in Shanghai, and graduated in 1913 from Wesleyan College in Macon, Georgia, United States.

While Song Qingling was studying abroad, Sun Yat Sen had led the overthrow of the Qing dynasty in the Revolution of 1911 and the establishment of the Republic of China. When she returned to China, she became his personal secretary. She married Sun Yat-sen on October 25, 1915, in Japan where he was in exile because the Chinese warlord, Yuan Shikai, had usurped his position as president of China. He had previously been married to Lu Muzhen. Quingling's parents greatly opposed the match, because Dr. Sun was twenty-six years her senior.

While in Japan, Sun Yat Sen organized the Kuomintang Party. After Yuan Shikai died in 1916, Sun and Qingling returned to China, which was divided under the hegemony of numerous warlords. Sun established a military government in 1917 in Guangzhou, southern China, in an attempt to subdue the warlords of northern China. When this effort was not successful, Sun and Qingling moved to Shanghai in 1918. In 1920 they returned to Guangzhou in 1920 and Sun was elected president of the Republic of China, but troops loyal to an opposition leader drove them out of the city and destroyed Sun’s books and manuscripts. During this time Qingling suffered a miscarriage and afterward remained childless

In 1922 the couple returned to Shanghai, where Sun accepted assistance from representatives of the USSR and made contact with many Chinese officials. In 1923 he returned to Guangzhou and reorganized the Kuomintang to combine it with the newly founded Chinese Communist Party. The new organization adopted Sun’s “Three Principles of the People.” In 1924, the Kuomintang set up Whampoa Military Academy, headed by Chiang Kai Shek, near Guangzhou. In 1925, Sun died of cancer in Beijing, where he had gone to attempt to unite some of the many Chinese political factions in China’s struggle for freedom. Soong Qingling gave her husband a Christian burial.

After Sun's death, she was elected to the Kuomintang (KMT) Central Executive Committee in 1926. In 1926-27, she helped to prepare for the Northern Expedition against the Chinese warlords in the north. In 1927, Chiang Kai Shek, who had just been made military commander of the Kuomintang, betrayed the revolutionaries by ordering a massacre of communists, revolutionary intellectuals, and members of trade unions. Soong subscribed to the joint messages issued by CCP leaders and leftist KMT members denouncing the massacres. On August 1, 1927, Zhou En Lai and Zhu De led the Nanchang Uprising, an attempt by communist forces to take over the Kuomintang headquarters, and formed a revolutionary committee. Soong, who had exiled herself to Moscow, was elected to the committee’s seven-member praesidium. She broke with the Kuomintang in favor of the Chinese communists. The Chinese Communist Party forces fled to the Jinggang Mountains on the Jiangsu-Anhui border and set up a military base from which they fought a civil war with the Kuomintang.

In December, 1927, Soong Qingling’s sister May-ling married Chiang Kai Shek in exile in Japan. From 1927-1929, Soong traveled to the U.S.S.R. and France to campaign for Chinese freedom. She joined the Anti-Imperialist League, which was based in Belgium. In 1929 she was elected Honorary Chairman of the second congress of the Anti-Imperialist League, and became a leader of the international anti-Fascist movement. She returned to China in 1331 and supported the Chinese Communist Party’s move to end its civil war with the Kuomintang and join forces with them to fight the Japanese invasion of mainland China. She criticized Chiang Kai Shek for not resisting the Japanese and for his strong-arm tactics. In 1932 she was active in aiding the wounded of the 19th Route army which resisted the Japanese in the Battle of Shanghai.[1]

Soong joined with the revolutionary writer Lu Xun and others to establish the China League for Civil Rights to protect and rescue CCP members and others who were in opposition to Chiang Kai Shek. Many threats were made against her life, but she continued her activities. In 1936, when Chiang Kai Shek was taken hostage by Communist leaders who wanted to force him to join them in an alliance against the Japanese, she participated in the negotiations to release him.

When the Kuomintang and CCP began to fight the Chinese War of resistance in 1937, Soong went south to Guanzhou and Hong Kong, where she formed the China Defence League to raise funds from overseas Chinese and foreigners who opposed the Japanese occupation of China. She worked to enlarge the national front against Japan and to ensure equal treatment for all Chinese resistance forces. In 1941, she met with foreigners who supported the Chinese cause, including Ma Haide (George Hatem) journalists Agnes Smedley and Edgar Snow, and the Kuomintang headquarters in Chongqing. 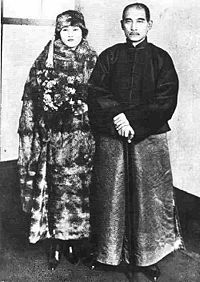 Soong Ching-ling accompanied Sun Yat-sen in 1924 on his final trip to Beijing.

When the War of Resistance ended with the end of World War II, Soong continued to direct the China Defence League, now the China Welfare Fund, which provided relief for working people in Shanghai and now focuses on maternal and pediatric healthcare, preschool education, and other children's issues. She also gathered supplies for the Communist Peoples’ Liberation Army. In 1949, the Communists defeated the Kuomintang, which fled to Taiwan Island and established the Republic of China there with Chiang Kai Shek as president.

In September, 1949, at the First Plenary Session of the Chinese People’s Political Consultative Conference, the Communists founded the Peoples Republic of China. Soong was elected the Vice Chair of the People's Republic of China (now translated as "Vice President"). She also served as head of the Sino-Soviet Friendship Association and Honorary President of the All-China Women's Federation. In 1951 she was awarded the Stalin Peace Prize (Lenin Peace Prize after destalinization), and in 1953 a collection of her writings, Struggle for New China, was published. From 1968 to 1972 she acted jointly with Dong Biwu as head of state, visiting the U.S.S.R., India, Pakistan, Ceylon, Indonesia and Burma to represent China. For many years, Soong was head of the Chinese Red Cross and People’s Relief Administration of China.

In the early 1950s, she founded the magazine, CHINA RECONSTRUCTS, now known as CHINA TODAY, with the help of Israel Epstein. This magazine is published monthly in six languages (Chinese, English, French, German, Arabic and Spanish).[2]

On May 16, 1981, two weeks before her death, she was admitted to the Communist Party and was named Honorary President of the People's Republic of China. She is the only person ever to hold this title.

Soong Ching-ling is still a beloved figure in mainland China. In 1982, to commemorate the first anniversary of her death, the Chinese Communist Party declared Soong’s residence a historical landmark. It now houses a museum displaying her photographs, letters, articles and books. Her writings were published in The Selected Works of Soong Ching Ling. The China Welfare Institute continues to carry out the work that she began with the China Defence League. [1]