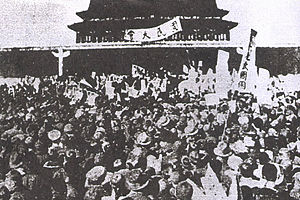 Protestors at the May Fourth Movement

The May Fourth Movement (五四運動, 五四运动, wǔ sì yùn dòng) was an anti-imperialist cultural and political movement, which marked an intellectual turning point in early modern China. It brought about an upsurge of Chinese nationalism, and a re-evaluation of Chinese cultural institutions, such as Confucianism. The movement grew out of dissatisfaction with the Treaty of Versailles settlement, termed the “Shandong Problem.” China had assisted the British in World War I on the condition that all German spheres of influence in China would be returned at the end of the war. Instead, the treaty awarded Shandong to Japan. On May 4, 1919, three thousand students held a demonstration in Beijing, initiating a protest which rapidly spread across China and soon involved intellectuals and the working classes. As a result, the Chinese embassy in Paris, led by Wellington Koo, refused to sign the peace treaty.

The May Fourth Movement led to the New Cultural Movement and a drastic change in society. Intellectuals, perceiving the United States as hypocritical, turned away from Western democracy and towards communism. The introduction of Vernacular Chinese (白话) made it possible for people with little education to read texts, articles, and books. The May Fourth Movement also promoted the successful reorganization of the nationalist Kuomintang party, later ruled by Chiang Kai-shek, and stimulated the formation of the Chinese Communist Party.

Following the Xinhai Revolution in 1911, the Qing Dynasty was overthrown, ending thousands of years of powerful imperial rule, and theoretically ushering in a new era in which political power was in the hands of the people. In reality, however, China was a fragmented nation dominated by warlords, who were more concerned with their private armies and establishing their own political power than national interests. The Chinese Beiyang government was occupied with suppressing internal uprisings, and did little to counter the influence exerted by imperialist foreign powers. In order to gain monetary and military support against their rivals, the Beiyang government made various concessions to foreigners. This, together with the continuing unrest caused by conflicts among warlords, led to great suffering among the population.

Furthermore, the development of the New Cultural Movement promoted the questioning and re-appraisal of millennia-old Chinese values. Defeats by foreign powers and the presence of spheres of influence only further inflamed the sense of nationalism among the people. In 1915, the New Culture Movement (新文化運動, 新文化运动, xīn wén huà yùn dòng) was inaugurated by the creation of the New Youth journal, established by Peking University professor Chen Duxiu. Responding to a debauched Qing dynasty and failing republic, intellectuals blamed the cultural heritage of China for its many problems. This movement became the basis for the more widespread and political May Fourth Movement. 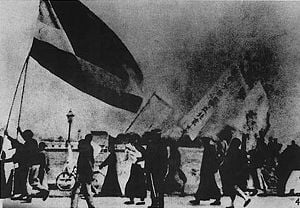 Students in Beijing rallied during the May Fourth Movement.

China had entered World War I on the side of the Allied Triple Entente in 1917, with the condition that all German spheres of influence, such as Shandong, would be returned to China. That year, 140,000 Chinese laborers, the Chinese Labor Corps, were sent to France as part of the British army.[1] Instead of rewarding China for its contribution to the Allied victory, the Versailles Treaty of April 1919, awarded Shandong Province to Japan.

The representatives of the Chinese government put forward the following requests:

The Western Allies dominated the meeting and paid little heed to the Chinese representatives' demands. Britain and France were primarily interested in punishing Germany. Although the United States promoted Woodrow Wilson's utopian Fourteen Points and the ideals of self-determination at the conference, Wilson abandoned most of these ideals in the face of stubborn resistance by David Lloyd George and Georges Clemenceau. American advocacy of self-determination at the League of Nations was attractive to Chinese intellectuals, but the failure of the United States to follow through was seen as a betrayal. Chinese diplomatic failure at the Paris Peace Conference in 1919, became the incident that touched off the outbreak of the May Fourth Movement, and became known as the "Shandong Problem."

On the morning of May 4, 1919, student representatives from thirteen different local universities met in Peking and drafted five resolutions.

On the afternoon of May 4, over 3000 students of Peking University and other schools gathered together in front of Tiananmen and held a demonstration. The general consensus was that the Chinese government was "spineless." The crowds voiced their anger at the Allied betrayal of China and the government's inability to secure Chinese interests in the conference.

They shouted out such slogans as "Struggle for the sovereignty externally, get rid of the national traitors at home," "Do away with the 'Twenty-One Demands'," "Don't sign the Versailles Treaty." The angry students demanded punishment for diplomats such as Cao Rulin, Zhang Zongxiang, and Lu Zongyu, who held important posts, and even burned down Cao Rulin's house. The Beiyang government suppressed the demonstration and arrested many students, one of whom was killed.

The next day, students in Beijing went on strike, and student groups in other parts of the country responded, one after another. From early June, in order to support the students' struggle, workers and businessmen in Shanghai also went on strike. The center of the movement moved from Beijing to Shanghai. In addition to students and intellectuals, the lower class was also very angry at local conditions, such as mistreatment of workers and perpetual poverty of small peasants. After intense public outcry, the Beiyang government had to release the arrested students and dismiss Cao Rulin, Zhang Zongxiang, and Lu Zongyu from their posts. Also, the Chinese embassy in Paris, led by Wellington Koo, refused to sign on the peace treaty; the May Fourth Movement won an initial victory. However, this move was only symbolic. Japan still retained control of the Shandong Peninsula and the islands in the Pacific it had obtained during World War I. China declared the end of its war against Germany in September 1919, and signed a separate treaty with Germany in 1921. The dispute was mediated by the United States in 1922, and the sovereignty of Shandong was returned to China, in exchange for special rights for the Japanese residents there.

The May 4 Movement demonstrated that a strong Confucian tradition had failed to make China a strong nation, and proved that China's position in the world had diminished. Intellectuals pointed out weaknesses and proposed plans to strengthen China, which was fragmented and humiliated by foreign nations. Chen Duxiu, one of the key figures of the New Cultural Movement, began publishing a journal called New Youth in 1915, with the intention of promoting individual freedom, science, democracy, and the emancipation of women.

Another outcome was the introduction of Vernacular Chinese (白话) by Hu Shih. In theory, the new Chinese format allowed people with little education to read texts, articles and books. Classical Chinese, which had been the written language prior to the movement, was only known by highly educated people, mostly government officials. With the introduction of Vernacular Chinese, the literary output in China was greatly increased and many well-known writers, such as Mao Dun, Lao She, Lu Xun, and Bing Xin, published their first works. Lu Xun, was the first novelist to write articles in the vernacular language in a book, titled The True Story of Ah Q.

As part of the May Fourth Movement, mass meetings were held throughout China for the common people, and more than four hundred new publications were founded to spread the new thought. This accelerated the decline of traditional Confucian ethics and the family system, and gave momentum to the emancipation of women. Intellectuals became deeply involved in China’s subsequent political developments. The May Fourth Movement also promoted the successful reorganization of the nationalist Kuomintang party, later ruled by Chiang Kai-shek, and stimulated the formation of the Chinese Communist Party.

The May Fourth Movement was a thoroughly anti-imperialist and anti-feudal revolutionary movement. Young students acted as its pioneers. The Chinese working class went up on the political stage, and functioned as the main force in the later period of the movement. Li Dazhao, Chen Duxiu and other intellectuals directed and promoted the development of the movement, and played leading roles in it. On the local level, future Communist Party leader Mao Zedong rallied opposition against Hunan's warlord Chang Ching-yao.

The May Fourth Movement covered more than 20 provinces and over 100 cities of the country. It had a broader popular foundation than the Revolution of 1911. Its great contribution lay in arousing the people's consciousness and preparing for the unity of the revolutionary forces.

A boycott of Japanese products in this period slightly boosted the industries of China. For two months during 1919, local chambers of commerce decided to sever economic ties with Japan, workers refused to work in Japanese-funded factories, consumers refused to buy Japanese goods, and vigilante groups of students mobilized to punish those found selling, buying or using Japanese products.

Retrieved from https://www.newworldencyclopedia.org/p/index.php?title=May_Fourth_Movement&oldid=1086388
Categories:
Hidden category:
This page was last edited on 9 November 2022, at 02:19.
Content is available under Creative Commons Attribution/Share-Alike License; additional terms may apply. See Terms of Use for details.