Sòng Měilíng or Soong May-ling or Soong Mei-ling, also known as Madame Chiang Kai-shek (Traditional Chinese: 宋美齡; Simplified Chinese: 宋美龄; pinyin: Sòng Měilíng; ca 1897 [1] – October 23, 2003) was the youngest of the three Soong sisters, all of whom achieved prominence during the emergence of modern China. Their father, Charles Jones Soong, a wealthy Chinese Methodist, had studied in the United States, and sent her to Wellesley College, where she graduated with honors in 1917. Chiang Kai Shek converted to Christianity and divorced his first wife in order to marry her in 1927. Madame Chiang became actively engaged in Chinese politics, initiating the New Life Movement and serving as a member of the Legislative Yuan from 1930 to 1932 and Secretary-General of the Chinese Aeronautical Affairs Commission from 1936 to 1938. As her husband rose to become Generalissimo and leader of the Kuomintang, Madame Chiang acted as his English translator, secretary and adviser.

Her experiences in the United States made her an able spokeswoman. During World War II she traveled widely, publicizing China’s plight and eliciting support against the Japanese. In 1943, she was the first Chinese national and the second woman to address the U.S. Congress. In 1948, Madame Chiang went to the United States to appeal to President Harry Truman for support for the Kuomintang. After the establishment of the provisional government of the Republic of China in Taiwan in 1949, she played a prominent role in the politics of the Republic of China as the wife of President Chiang Kai-shek. For nearly 25 years she was included on the list of America's ten most admired women, and was featured twice on the cover of Time Magazine, once with her husband and once on her own, under the title “Dragon Lady.” After Chiang Kai Shek’s death in 1975, she resided in the United States until her death at the age of 103.

Soong May-ling was born in 1897 in Shanghai [2], into a wealthy Hakka Chinese family that had come from Wenchang County, on Hainan Island in southern China, and had converted to Methodist Christianity. Her father, Sung Yao-ju used the anglicized name Charles Jones Soong and had studied in the United States. He was a wealthy businessman and Christian minister who published Bibles and was a friend and financial supporter of Sun Yat Sen (Perkins 1999). May-ling was the third of six children; her oldest sister was Ai-ling, middle sister Ching-ling, and three younger brothers, T. V., T.L, and T.A. Soong. Soong Ching-ling later married Sun Yat Sen.

May-ling’s eldest sister, Ai-ling, went to the United States to study at Wesleyan College for Women in Macon, Georgia. May-ling entered Motyeire School, an American private school, in Shanghai at the age of eight. In 1913, she started college at her sisters' alma mater, Wesleyan College in Macon, Georgia, but transferred to Wellesley College in order to be closer to her brother, Song Tae-wen, who was studying at Harvard University. On June 19, 1917 May-ling graduated with honors with a major in English literature and minor in philosophy. She was recognized as one of 33 Durant Scholars. As a result of being educated in the United States she spoke excellent English with a pronounced Georgia accent which later helped her connect with American audiences[3]

In 1920, Soong May-ling met Chiang Kai-shek, then a military officer serving Sun Yat Sen, at the home of her sister Soong Qing-ling, who had married Sun Yat Sen. Since Chiang was eleven years her senior, married with two sons, and a Buddhist, May-ling's mother vehemently opposed the marriage between the two, but finally agreed after Chiang showed proof of his divorce and promised to convert to Christianity. Chiang told his future mother-in-law that he couldn't convert immediately, because religion needed to be gradually absorbed, not swallowed like a pill. They married on December 1, 1927, in Japan, while Chiang was in brief exile. Chiang was baptized into the Methodist church, though he did not publicly practice Christianity and continued to follow Confucian teachings. The couple never had any children. 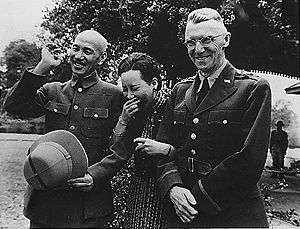 After Sun Yat Sen died in 1925, Chiang led the Northern Expedition against the warlords who controlled northern China. Under Sun’s leadership, the Kuomintang (KMT) had cooperated with the new Chinese Communist Party. However, in 1927, Chiang turned against the CCP and ordered the Kuomintang to massacre Communists. The Communists fled from the cities into rural areas, where they organized forces to oppose the KMT. In 1931, Japan invaded Manchuria and established a puppet state, Manchukuo, to use as a base for invading China Proper. In the X’ian Incident of 1936, CCP and KMT military leaders kidnapped Chiang Kai Shek at Huaquing Hot Springs outside X’ian, in a move to force him to stop fighting against the Communists and form a united KMT - CCP front to resist the Japanese (Perkins 1999). Madame Chiang played an important role in convincing her husband to agree to their demands.

Madame Chiang initiated the New Life Movement and became actively engaged in Chinese politics. She was a member of the Legislative Yuan from 1930 to 1932 and Secretary-General of the Chinese Aeronautical Affairs Commission from 1936 to 1938. In 1945, she became a member of the Central Executive Committee of the Kuomintang. As her husband rose to become Generalissimo and leader of the Kuomintang, Madame Chiang acted as his English translator, secretary and advisor. She was his muse, his eyes, his ears, and especially his most loyal champion. During World War II, Madame Chiang tried to promote the Chinese cause and build a legacy for her husband on par with Roosevelt, Churchill and Stalin. Well versed in both Chinese and western culture, she became popular both in China and abroad. Her prominence led Joseph Stilwell to quip that she ought to be appointed Minister of Defense.

Madame Chiang visited the United States many times to appeal for material and military support for China. There, she drew crowds as large as 30,000 people and made the cover of Time magazine twice, first with her husband as "Man and Wife of the Year" and then alone under the title "Dragon Lady." Both husband and wife were on good terms with Time Magazine senior editor and co-founder Henry Luce, who frequently tried to rally money and support from the American public for the Kuomintang. On February 18, 1943, she became the first Chinese national and the second woman to address the U.S. Congress.

Madame Chiang accompanied her husband to the Cairo Conference in November, 1943, were he met personally with British prime minister Winston Churchill and United States President Franklin Delano Roosevelt. The three agreed that Japan should give up control of the territories it had invaded, Taiwan and Manchuria should be returned to China, and Korea should be given complete independence. She also carried communications between U.S. General Jospeh Stilwell, who was supporting China against Japan, and Chiang Kai Shek.

After the end of World War II and the defeat of Japan in 1945, the Kuomintang and the Chinese Communist Party returned to civil war in China. In 1948, Madame Chiang went to the United States to appeal to President Harry Truman for support for the Kuomintang, but the United State refused to alter its policy of non-involvement in the affairs of China. She remained in the United States until after the defeat of her husband's government in the Chinese Civil War in 1949, and joined her husband in Taiwan in 1950. Her sister Soong Ching-ling sided with the CCP and stayed on the mainland.

Chiang Kai Shek and the Kuomintang established the provisional government of the Republic of China(ROC) in Taiwan. Madame Chiang continued to play a prominent international role. She traveled to the United States to represent the ROC and its interests. She was a Patron of the International Red Cross Committee, honorary chair of the British United Aid to China Fund, and First Honorary Member of the Bill of Rights Commemorative Society. As Chiang Kai Shek began to become senile, Madame Chiang spoke for him power by assuming the role of "interpreter." Madame Chiang continued to play a prominent international role. For nearly 25 years she was included on the list of America's ten most admired women. 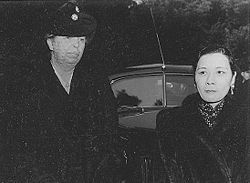 After the death of her husband in 1975, Madame Chiang assumed a low profile. Chiang Kai-shek was succeeded politically by his eldest son Chiang Ching-kuo, from a previous marriage, with whom Madame Chiang had a difficult relationship. In 1975, she emigrated from Taiwan to her family's 36-acre (14.6 hectare) estate in Lattingtown, Long Island, where she kept a portrait of her late husband in full military regalia in her living room.

Madame Chiang returned to Taiwan upon Chiang Ching-kuo's death in 1988, to shore up support among her old allies. However, Chiang's successor as president, Lee Teng-hui, proved to be more adept at politics than she was, and consolidated his position. She again returned to the United States.

Madame Chiang made a rare public appearance in 1995 when she attended a reception held on Capitol Hill in her honor, in connection with celebrations of the fiftieth anniversary of the end of World War II. Madame Chiang also made her last visit to Taiwan in 1995.

In the 2000 Presidential Election on Taiwan, the Kuomintang produced a letter from her in which she purportedly supported the KMT candidate Lien Chan over independent candidate James Soong (no relation). The authenticity of the letter was the subject of great debate in Taiwan. James Soong himself never disputed the authenticity of the letter, which might have been written as a payback for his earler veiled criticism of her, when he supported Lee Teng-hui.

Madame Chiang sold her Long Island estate in 2000 and spent the rest of her life in her Gracie Square apartment on the Upper East Side of Manhattan, surrounded only by black-suited bodyguards who cleared the lobby as she passed.

Madame Chiang died peacefully in New York City, in her Manhattan apartment in 2003 at the age of either 105 or 106. Her remains were temporarily interred at Ferncliff Cemetery in Hartsdale, New York, pending an eventual burial with her late husband who was entombed in Tzuhu, Taiwan. The stated intention is to have them both buried in mainland China once political conditions make it possible.