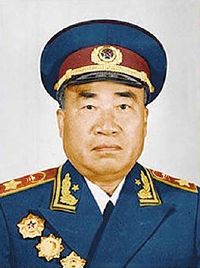 Zhū Dé (Chinese: 朱德, Wade-Giles: Chu Te, zi: Yùjiē 玉阶) (December 1, 1886 – July 6, 1976) was a Chinese Communist military leader and statesman. He is regarded as the founder of the Chinese Red Army (the forerunner of the People's Liberation Army) and the tactician who engineered the revolution from which emerged the People's Republic of China. Zhu De was also the Vice-Chairman of the Chinese Communist Party from 1956 to 1966. He was purged in 1966 during the Cultural Revolution, but reinstated in 1971 as the Chairman of the Standing Committee. He continued to be a prominent and respected elder statesman until his death in July 1976.

Zhu De participated in the Revolution of 1911, then became an officer and commander in the armies of the Szechwan and Yunnan warlords. In the 1920s he abandoned warlordism, and went to Germany to study at Göttingen University. In 1926, he returned to China and took control of a Kuomintang military force under the First United Front (China). After the Nanchang Uprising in 1927, he led the remainder of his army to join Mao’s guerrilla forces in the Jinggang Mountains. Zhu De as commander, and Mao Zedong as political commissar, built the Red Army into a skilled guerrilla force which was able to ward off four campaigns by the much larger Kuomintang forces between 1930 and 1934. Zhu helped to form the break-out from the besieged Jiangxi Soviet that began the 6,000-mile Long March in October, 1934. In 1940, Zhu De ordered a coordinated offensive, the Hundred Regiments Campaign, against Japanese-held cities and railway lines. It was successful, but the Japanese retaliation severely curtailed the growth of the Chinese Communist Party.

Zhū Dé (朱德; Chu Te) was born December 1, 1886 into a large farming family in Yilong county, a hilly and isolated section of northern Sichuan province. After a secondary education financed by his uncle, Zhu felt obliged to enroll for the district civil service examinations, despite his dislike of the traditional Confucian education system. To his surprise, Zhu passed the examinations, and was awarded a xiucai degree. Zhu kept the results of the examination a secret from his family, and went to Chengdu to study physical education. He became a physical education teacher for a short time before joining the army. In 1904 he joined the Tongmenghui (同盟會, United Allegiance Society, also known as the Chinese United League or the Chinese Revolutionary Alliance), a secret society and underground resistance movement organized by Sun Yat-sen and Song Jiaoren "to overthrow the Manchu empire and to restore China to the Chinese, to establish a republic, and to distribute land equally among the people." (Chinese: 驅除韃虜，恢復中華，創立民國，平均地權)

In 1908, Zhu entered the Yunnan Military Academy in Kunming, and after his graduation in 1911, he taught in the academy. Zhu joined the rebellion that overthrew the Qing dynasty in 1911. For the next ten years Zhu served as a middle-ranking officer and then a brigade commander in the armies of the Szechwan and Yunnan warlords, and commanded units along the Laos and Vietnam borders. In 1916, following the death of his mentor, Cai E, Zhu De developed a strong opium habit and fell into a life of decadence and warlordism. However, Zhu's love of reading and exposure to communism inspired him to abandon his warlord lifestyle; he recovered from his addiction to opium in 1920 in Shanghai. In early 1922, Zhu attempted to join the Chinese Communist Party but was rejected due to his former warlord ties.

Zhu De began to read about Marxism and Leninism in Shanghai. In 1922, he went to Europe, and studied in Berlin and at Göttingen University until 1925, when he was expelled from the country by the German government for his role in a number of student protests. While in Germany, he joined the Communist Party, with Zhou Enlai as one of his sponsors. In July, 1925, he traveled to the Soviet Union to study military affairs. In 1926, he returned to China and took control of a Kuomintang military force under the First United Front (China) of the Kuomintang and the Chinese Communist Party.

In 1927, following the collapse of the First United Front, Zhu De was ordered to lead a force against the Nanchang Uprising. However, he had secretly helped to orchestrate the Nanchang Uprising, which began with a communist takeover of the city on August 1, 1927. Surrounded by Kuomintang forces, the Communists troops pulled out of Nanchang on August 3, and retreated towards the province of Guangdong, intending to take over the city of Guangzhou and win the support of the peasants and farms in that area.

In the beginning of October, the Communist troops were defeated by the Nationalist troops in Chaozhou. The Communists troops were scattered; only 1,000 Communist soldiers remained as a complete unit, in a regiment. Under the command of Chen Yi and Zhu De, who was using the alias “Wang Kai,” the remaining regiment sought refuge with a local warlord, Fan Shisheng, in Hunan, while other remnants of the Communist army retreated to Shanwei and engaged the Nationalists in guerrilla warfare. Zhu De’s force eventually grew to 10,000 strong, and in April 1928, with support from Chen Yi and Lin Biao, Zhu brought his army to the Jinggang Mountains, to join Mao’s guerrilla forces.

From these humble beginnings, Zhu De as commander and Mao Zedong as political commissar built the Red Army into a skilled guerrilla force that consolidated and expanded their areas of control. Zhu's bravery and skill in leading his men brought him prestige; locals believed he had supernatural abilities. During this time Mao and Zhu became so closely connected that to the local peasant farmers, they were known collectively as "Zhu Mao." There were few resources, conditions were difficult, and the peasants were at first apathetic. Nevertheless, Zhu built up the Red Army from 5,000 troops in 1929 to 200,000 in 1931.

Between 1930 and 1934, the Kuomintang made five attempts to encircle the Communist base in the Jinggang Mountains. The first two campaigns failed; Chiang Kai-shek personally directed a third one in the summer of 1931. After a battle at Gaoxing in September, in which both sides had heavy casualties, Mao moved the Communist base from Jinggangshan to Ruijin in the east. There, the Communists formed the Jiangxi Soviet, which eventually grew to cover approximately 30, 000 square kilometers and encompass more than three million people. The Communist forces developed guerrilla tactics, conducting surprise attacks in small groups rather than confronting their attackers head-on. “The enemy advances, we retreat; the enemy halts, we harass; the enemy tires, we attack; the enemy retreats, we pursue.”[1] In 1931, Zhu was appointed leader of the Red Army at the Ruijin Congress by the CCP leadership.

In the spring of 1933, Zhu De successfully led a conventional military force against 250,000 government troops during the Fourth Counter Encirclement Campaign. In October, 1933, a Fifth Counter Encirclement Campaign was undertaken with 700,000 troops and the aid of General Hans von Seeckt of the German High Command. Pillboxes, forts and checkpoints were set up on all the roads to cut supply lines and slowly starve the Communist forces.[2] Reluctantly the Chinese Communist Party began to make preparations to flee the Jiangxi Soviet. Zhu helped to form the break out from the soviet that began the Long March. In October 1934, 90,000 men escaped in five separate groups and rejoined later to start the 6,000-mile Long March to Shensi province (1934–1935).

During the Long March, Zhu De and Zhang Guotao commanded the "western column" of the Red Army, which barely survived the retreat through Sichuan Province. In Yan'an, Zhu directed the reconstruction of the Red Army under the political guidance of Mao.

During the Second Sino-Japanese War and the Chinese Civil War, Zhu De held the position of Commander-in-Chief of the Red Army. In 1940 Zhu De devised and organized the Hundred Regiments Offensive, a major campaign of the Communist Party of China's Red Army commanded by Peng Dehuai against the Imperial Japanese Army in Central China. There was a general sentiment among the anti-Japanese resistance forces, particularly in the Kuomintang, that the CCP was not contributing enough to the war effort, and that they were only interested in expanding their own power base. The CCP therefore planned to stage a great offensive to demonstrate that they were supporting the war effort and to amend KMT-CCP relations.

By 1940, the Communist forces had grown to 400,000 men, in 115 regiments. The extraordinary success and expansion of the Eighth Route Army against the Japanese led Zhu De and the rest of the military leadership to hope that they could engage the Japanese army and win. Mao Zedong opposed the campaign, arguing that the war against Japan would be only protracted by such an offensive, and that communist strategy should emphasize guerrilla warfare, political mobilization and the building up of base areas.

Nevertheless, Zhu De ordered a coordinated offensive, the Hundred Regiments Campaign, by most of the communist regulars against the Japanese-held cities and the railway lines linking them. From August 20 to September 10, 1940, communist forces attacked the railway line that separated the communist base areas, chiefly those from Dezhou to Shijiazhuang in Hebei, Shijiazhuang to Taiyuan in central Shanxi, and Taiyuan to Datong in northern Shanxi. They succeeded in blowing up bridges and tunnels and ripping up track, and went on for the rest of September to attack Japanese garrisons frontally, taking excessive casualties (22,000 regulars, compared to Japanese losses of 3000 or 4000). About six hundred miles of railways were destroyed, and the Chingching coal mine, which was important to the Japanese war industry, was rendered inoperative for six months. It was the greatest victory the CCP fought and won during the war.

However, from October to December the Japanese responded in force, reasserting control of railway lines and conducting aggressive "mopping up operations" in the rural areas around them. When General Yasuji Okamura took command of the North China Area Army in the summer, the new Japanese approach was a "Three Alls Policy," meaning “kill all, burn all, and destroy all” in those areas containing communist forces. The population of the communist base areas dropped dramatically and communist operations were severely limited, with CCP forces reduced to 300,000 men. The number of counties in North China under Communist control dropped from 437 to 10. Mao used the subsequent rectification campaign to reassert his personal authority over the party and over military strategy, and abandoned any serious Communist challenge to the Japanese position in North China for the rest of the war.

After 1949, Zhu was named Commander-in-Chief of the People's Liberation Army (PLA). He was also the Vice-Chairman of the Communist Party (1956-1966) and Vice-Chairman of the People's Republic of China (1954-1959). In 1950, Zhu De oversaw the Peoples Liberation Army during the Korean War. In 1955, he was made a marshal. In 1966, during the Cultural Revolution, Zhu De was dismissed from his position in the Standing Committee of the National People's Congress, but Zhou Enlai was able to protect him from being executed or imprisoned. In 1971, Zhu was reinstated as the Chairman of the Standing Committee. He continued to be a prominent and respected elder statesman until his death in July 1976.

Retrieved from https://www.newworldencyclopedia.org/p/index.php?title=Zhu_De&oldid=1090570
Categories:
Hidden category:
This page was last edited on 3 December 2022, at 15:28.
Content is available under Creative Commons Attribution/Share-Alike License; additional terms may apply. See Terms of Use for details.