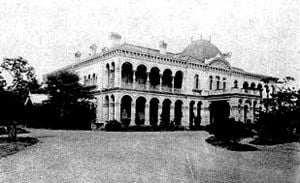 Rokumeikan at its completion in 1883

The Rokumeikan (鹿鳴館, Rokumeikan) "Deer-cry Hall" was a large two-story building in Tokyo, completed in 1883, which was to become a controversial symbol of Westernization in the Meiji period. Commissioned for the housing of foreign guests by the Foreign Minister Inoue Kaoru according to a general Westernization policy, it was designed by Josiah Conder, a prominent Western architect working in Japan.

Inoue intended to use it as a diplomatic cultural tool to re-negotiate unequal treaties forced upon Japan by Western powers. Despite the Western architect's recommendations to add Japanese components, the Rokumeikan was built, with $27 million (in today's monetary value), as a Western style facility without any Japanese cultural element. While Japanese people understood the need for Westernization in the areas of technology, science, infrastructure, and other areas, they did not accept their spiritual or moral superiority; the Western powers were seen as barbarous and disrespectful. As the Rokumeikan appeared as a cultural symbol that glorified the West, some perceived it as humiliating and others questioned its diplomatic use.

Although the Rokumeikan's heyday was brief, it became famous for its parties and balls, which introduced many high-ranking Japanese officials to Western manners for the first time and it is still fixed in the cultural memory of Japan. It was, however, largely used for the accommodation of guests of the government, and for meetings between Japanese who had already lived abroad. Its image as a center of dissipation is largely fictional.

During the late nineteenth century, Japan was not considered an equal power by powerful Western countries and was still under the threat of colonization. In addition, Japanese culture was not respected by many in the West, but were a "curious" subject of cultural anthropology or ethnic studies. After the Meiji Restoration the government adopted a Westernization policy to modernize Japan. This general policy was applied in all spheres of political governance including law, military, education, finance, infrastructure, communication, transportation, culture, and others.

Kaoru Inoue, the Foreign Minister, sought to establish a Western style guest house or a party hall for foreign diplomats and dignitaries in order to present Japanese culture as equal to that of the West. Inoue commissioned Josiah Conder, a Western architect working in Japan, to construct the Rokumeikan. Conder, who understood and valued Japanese culture, intended to add unique cultural elements to the hall, but Inoue rejected such ideas except for a garden landscape. The hall was thus built as a thoroughly Western style. Despite the large expense (a cost equivalent to US $27 million today), the Rokumeikan was perceived by Westerners as a cheap replica of a European dance hall.

The Rokumeikan was a cultural symbol of Japan's Westernization policy. While the people of Japan recognized the need for Western technology, science, infrastructure, and other aspects, they were not comfortable with the Westernization of the cultural, spiritual traditions of Japan. Some perceived the Westernization of Japan not as a natural process of development, but a process forced upon them by the Western powers under the threat of colonization. While the Japanese recognized the military and technological supremacy of the West, they did not perceive the West as morally, spiritually superior. For the Japanese, as well as people of neighboring countries, the Westerners were invaders and barbarians.

Within this cultural climate, the Rokumeikan caused mixed feelings. On one hand, it represented the general policy of the day, but on the other hand, it was a symbol of humiliation that glorified the West. Inoue intended to use the Rokumeikan as a diplomatic tool to renegotiate various unequal treaties previously made between Japan and the Western countries. Many also questioned the diplomatic value of the hall, and eventually the hall was closed.

The Rokumeikan was built in Hibiya, near the Imperial Palace on land which had formerly been used as an arsenal for the Satsuma domain. After the Meiji restoration, in 1872 the land became the headquarters of the secretariat charged with preparations for the Vienna Exhibition of 1873. Between July 1875 and October 1881 the land was occupied by the colossal “Yamashita Monnai Museum,” a combined zoological and botanical garden, which was then moved to Ueno to make way for the new building and its grounds.

Foreign visitors had previously been housed in the Enryōkan, a building originally erected by the Tokugawa shogunate as part of a training school for naval cadets. Despite attempts at modernization, the building was old and deemed no longer considered satisfactory for housing foreign dignitaries.

Josiah Conder received a commission to design a new structure in 1880, and building work started in 1881. Conder borrowed from the French Renaissance style, and used a Mansard roof in his design, which also incorporated an arched portico with columns. However, Conder's wish to put Japanese elements in the design was overruled, although he claimed to have included "pseudo-Saracenic" features. Only the garden, which used pine trees, stone lanterns and ponds, was in the Japanese style.

Difficulties were encountered in construction which caused the original budget of 100,000 yen (US $15 million at today's value) to expand to 180,000 yen (US $27 million at today's value) before construction was completed. In contrast, the Foreign Ministry building cost only 40,000 yen (US $6 million) to construct. The building was officially opened on November 28, 1883 with a gala to which 1200 guests were invited, including nobles, bureaucrats and foreign diplomats; the event was presided over by the Foreign Minister Inoue Kaoru and his wife Takeko.[1]

Inoue's intent with the Rokumeikan was to impress Western visitors by creating a faultless Western atmosphere in which diplomats and foreign dignitaries would feel themselves not among "natives" but among cultural equals. He hoped that they would be more inclined to regard Japan as an equal in terms of “civilization," which would facilitate renegotiations of the Unequal Treaties, abolition of extraterritoriality and would hasten Japan's entry as an equal in the ranks of the imperial powers.[2]

The Rokumeikan hosted elaborate banquets, with menus written in French. In the ballroom, Japanese gentlemen in evening dress imported from tailors in London danced the waltz, polka, quadrille, and mazurka with Japanese ladies dressed in the latest Parisian fashions to the latest European songs played by an Army or Navy band. Foreign residents of Tokyo were hired as dancing tutors.[3]

The results were mixed. Although the highly conspicuous Western building was praised by some visitors, its concept was deplored by many others as tasteless imitation. Pierre Loti, who arrived in Japan in 1886, compared the building (in Japoneries d'Automne, 1889), to a mediocre casino in a French spa town, and the European-style ball to a “monkey show.”[4] Likewise, the noted French artist Charles Bigot published a cartoon depicting a stylishly dressed Japanese man and woman admiring themselves in a mirror, but the reflection was that of a pair of monkeys.[5]

Japanese conservatives were outraged by what they perceived to be the degeneration of traditional morals, especially by the close proximity between men and women during dances, and they linked rising taxes with the supposed dissipation and self-indulgence of the government. Reports and gossip of scandalous behavior by high-ranking officials (although the most notorious took place at private residences, not at the Rokumeikan), added to the controversy.[6]

The failure of "Rokumeikan diplomacy" to achieve its desired goal of treaties revised in Japan's favor led eventually to the discrediting of Inoue, who resigned in 1887.

The Closing of the Rokumeikan

In 1890, the Imperial Hotel opened nearby the Rokumeikan (again with the involvement of Inoue), and was on a grander scale. The opening of the hotel eliminated the need for the Rokumeikan as a residence for foreign visitors. The banquets and balls continued, and the nativist reaction did not slow the construction of Western-style buildings in Tokyo, but with the increasing Westernization of Japan, a growing sense of cultural nationalism, and the eventual elimination of the Unequal Treaties in 1899, the Rokumeikan steadily diminished in importance.[7]

The Rokumeikan building was sold in 1890, to an association for kazoku (nobles) peerage of Japan.[8] In 1897, Conder was called in to repair the building and make alterations. It was known as the "Peers Club" (Kazoku Kaikan) for the next few decades.

The building was demolished in 1941,[9] an event which disturbed the architect Taniguchi Yoshirō and eventually led him to create the Meiji Mura (Meiji village) for the preservation of Meiji period buildings.

The name “Rokumeikan” comes from a Chinese classic, the Shi Jing ("Book of Songs"), and refers to the benefits of hospitality. The 161st ode is entitled Lù Míng, 鹿鳴, which is read in Japanese as rokumei. It was chosen by Nakai Hiroshi, the first husband of Inoue's wife Takeko.

With pleased sounds the deer call to one another, eating the celery of the fields. […] I have here admirable guests; whose virtuous fame is grandly brilliant. They show the people not to be mean; the officers have in them a pattern and model. (translated by James Legge (1841)[10]

The name is often translated as "Deer Cry Pavilion," and in older books the misleading translation "Hall of the Baying Stag" is given.

The Rokumeikan is frequently mentioned in Japanese literature, for example

The site of the Rokumeikan is in Chiyoda-ku, Uchisaiwaichō 1-chome. There is a monument in front of the Yamato Life Insurance Company's head office marking the spot.

Retrieved from https://www.newworldencyclopedia.org/p/index.php?title=Rokumeikan&oldid=1091622
Categories:
Hidden category:
This page was last edited on 16 December 2022, at 02:43.
Content is available under Creative Commons Attribution/Share-Alike License; additional terms may apply. See Terms of Use for details.