A plasmid is an extrachromosomal, extranuclear DNA molecule occurring free in the cytoplasm and capable of autonomous replication (independently of the chromosomal DNA). It usually occurs in bacteria, sometimes in eukaryotic organisms (e.g., the 2–micron–ring in Saccharomyces cerevisiae).

Plasmids are proving to be a great boon for the role of human beings as stewards of nature. In addition to research use in genetics and biochemistry, they serve many practical uses. For example, desirable genes can be inserted into plasmids in bacteria, which can then be used to produce large amounts of important proteins, such as insulin or antibiotics, or be used for waste treatment. This level of mastery over creation carries an important responsibility, however, since such human creativity can be used for good (correction of defective genes, treatment of oil spills, production of antibiotics) or for unethical purposes (biological warfare).

The term plasmid was first introduced by the American molecular biologist Joshua Lederberg in 1952 to describe any extrachromosomal hereditary determinant. Currently, however, the term plasmid is restricted only to those accessory DNA molecules that are found in addition to the main chromosomes. 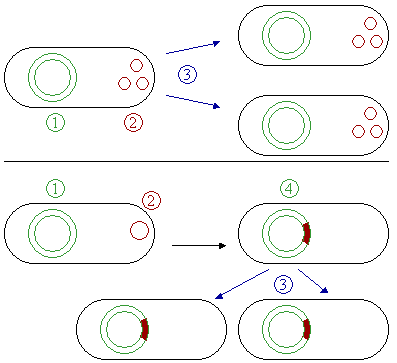 Different types of plasmids have been reported and it is possible for plasmids of different varieties to coexist in a single cell. Seven different plasmids have been found in E. coli. But related plasmids are often incompatible, in the sense that only one of them survives in the cell line, due to the regulation of vital plasmid functions. Therefore, plasmids can be assigned into compatibility groups. Some important groups of plasmids occurring in bacteria are given below. Plasmids can belong to more than one of these functional groups.

Some plasmids can become associated with another plasmid or with nuclear chromosome; in the latter case, the plasmid is known as episome. In another words, an episome is a plasmid of bacteria or viral DNA that can integrate itself into the chromosomal DNA of the host organism (Figure 2). For this reason, it can stay intact for a long time, be duplicated with every cell division of the host, and become a basic part of its genetic makeup.

Episomes are not essential and may be absent in the cells. They do not originate de novo, but are acquired either due to infection or conjugation. Even if they are present, they may be lost ultimately. This term is no longer commonly used for plasmids, since it is now clear that a transposon (jumping gene or mobile genetic unit) makes a plasmid into an episome. In mammalian systems, the term episome refers to a circular DNA (such as a viral genome) that is maintained by non–covalent tethering to the host cell chromosome. 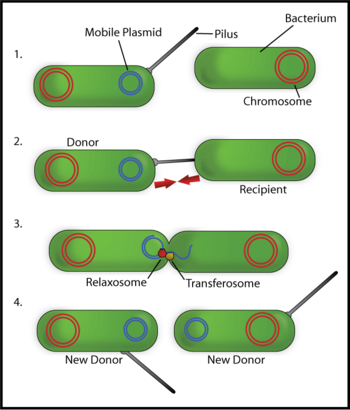 Fertility or F–plasmids are capable of carrying out bacterial conjugation, a plasmid regulated complex process of sexual transfer of F–plasmid to another bacterium (Figure 3). Among the two conjugating strains of bacteria, the one with F–factor is known as male, donor, or F+ strain and the one without F–factor is known as female, receptor, or F- strain. F–factor consists of genes responsible for self–replication, for the formation of sex–pili or f–pili to establish contact between the cells of two strains, and for the formation of cytoplasmic bridge and tra–genes responsible for the transfer of the plasmid. Sometimes, the F–factor can also transfer chromosomal DNA to the receptor bacterium if the factor happens to be integrated to the chromosomal DNA. Such strains have genetic recombination rate 103 times greater than that of F+ and F- strains; so, they are termed high frequency recombinants (Hfr). Thus, plasmids can be part of the mobilome, since they are often associated with conjugation, a mechanism of horizontal gene transfer. 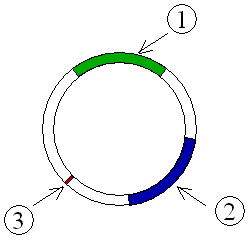 Figure 4: Schematic drawing of a plasmid with antibiotic resistances. 1 & 2 Genes that code for resistance. 3 Ori.

Resistance or R–plasmids contain genes or gene cassettes that confer a selective advantage to the bacterium harboring them, such as the ability to make the bacterium antibiotic resistant, i.e., resistant against antibiotics or poisons. Historically they were known as R–factors.

Such a plasmid consists of two segments of DNA, one the resistance transfer factor (RTF) responsible for replication as well as transfer of R–plasmid, and the second resistant determinants (r–determinants), which are the genes producing substances neutralizing the action of one or another antibiotics or other drugs. These plasmids are conjugative and spread among the bacteria through conjugation. The antibiotic resistance observed in Shigella and Salmonella were due to R–factors.

One of the early detected R–plasmids is the penicillinase–plasmid of Staphylococcus aureus. S. aureus is a Gram positive bacterial pathogen causing infection of skin and wound of humans. After treatment with penicillin antibiotic, several penicillin–resistant staphylococci developed throughout the world by 1950. High level resistance to penicillin was due to secretion of an enzyme, penicillinase, that degrades penicillin by hydrolysis.

There are several bacterial strains that contain genetic determinants of resistance to heavy metals, such as Hg++, Ag+, Cd++, CrO4, Cu++, Ni++, Pb+++, Zn++, and so forth. These determinants for resistance are often found on plasmids and transposons. Bacteria that have been found resistant to heavy metals are E. coli, Pseudomonas aeruginosa, P. florenscens, P. syringae, and so forth.

There are many bacterial strains that produce proteinaceous toxins known as bacteriocin, which are lethal to other strains of the same genus. The bacteriocin producing genes are present not in chromosomes, but in special plasmids known as bacteriocin factor. Bacteriocins are already isolated from Escherichia coli (Colicin), Pseudomonas aeruginosa (Pyocin), Bacillus megaterium (Megacine), and others. Toxins secreted by the strains of E. coli are called colicins and the plasmid with responsible gene is known as colicinogeny or Col–factor. Several Col–plasmids like Col B, Col E, Col I, Col V have been recognized and they produce different types of colicins. Some of the Col–plasmids are conjugative (e.g., Col B, Col V) while others are non–conjugative (e.g., Col E) and are non–transmissible by their own means.

Another example of virulence plasmid is Ti–Plasmid (tumor inducing plasmid), which is found in Agrobacterium tumefaciens. It is a Gram–negative soil bacterium that infects over 300 different dicots, causing crown gall disease at collar region. Ti–plasmid consists of, besides other genes, T–DNA, which encodes enzymes for the synthesis of auxin and cytosine. These plant hormones affect plant metabolism, develop tumors, and enable plants to produce compounds called opines, which is used by the pathogen as sources of carbon and nitrogen. Closely related to Ti–plasmid is the Ri–plasmid (root inducing plasmid). It is found in A. rhizogenes and causes hairy root disease in the plants.

During isolation of plasmid DNA from a large number of bacteria, every bacterium was found to contain a low molecular weight DNA as a plasmid. Thus, it seems that the presence of plasmids is a general rule rather than exception. However, not all plasmids consist of genes having any phenotypic significance. The plasmids without any functional genes are termed as cryptic plasmid.

Plasmids used in genetic engineering are called vectors. They are used to transfer genes from one organism to another and typically contain a genetic marker conferring a phenotype that can be selected for or against. Most of them also contain a polylinker or multiple cloning site (MCS), which is a short region containing several commonly used restriction sites, allowing the easy insertion of DNA fragments at this location. See Applications below.

DNA can be analyzed by cutting it with restriction enzymes and determining fragment sizes using agarose gel electrophoresis. These enzymes specifically break the DNA at certain short sequences. The resulting linear fragments form "bands" after gel electrophoresis. It is possible to purify certain fragments by cutting the bands out of the gel and dissolving the gel to release the DNA fragments.

However, uncut plasmid DNA also can be identified. Ultraviolet (UV) treatment can cause dose–dependent incision in the sugar–phosphate backbone of DNA, and the plasmid DNA may appear in one of five conformations, which (for a given size) run at different speeds in a gel during electrophoresis. The conformations are listed below in order of electrophoretic mobility (speed for a given applied voltage) from slowest to fastest:

For their use as vectors and for molecular cloning, plasmids often need to be isolated. Depending on the need, they can easily be purified away from the rest of the genome.

There are several methods to isolate plasmid DNA from bacteria, the archetypes of which are the mini–prep and the maxi–prep. The former is a small scale preparation of plasmid DNA and starts with 1-5 ml of an overnight bacterial culture. There are many different miniprep protocols available. Some protocols are variations on the original protocol published by Birnboim and Doly (1979). Others use recent technology and employ a resin that binds, and then elutes, purified plasmid DNA. Several micrograms of DNA can be isolated with the mini–prep, and the procedure can be completed in a relatively short time. Such produced small amounts of impure plasmid DNA is sufficient for analysis by restriction digest and for some cloning techniques.

In the latter case, much larger volumes (several hundred milliliters) of bacterial suspension are grown from which a maxi–prep can be performed. Formerly, large-scale isolation of plasmid DNA required many hours of ultacentrifugation in a solution of cesium chloride-ethidium bromide. This procedure was time-consuming and required handling of toxic materials. Now, the same resins that can be used for the mini–prep are commonly employed for bulk preparation of the plasmid DNA and the procedure can be completed in several hours. Essentially, this is a scaled–up mini–prep followed by additional purification. This results in relatively large amounts (several μg) of very pure plasmid DNA.

In recent times, many commercial kits have been created to perform plasmid extraction at various scales, purity, and levels of automation. Commercial services can prepare plasmid DNA at quoted prices below US$300 per milligram (mg) in milligram quantities and $15/mg in gram quantities.

Plasmids serve as important tools in genetics and biochemistry laboratories, where they are commonly used to multiply (make many copies of) or express particular genes. Many plasmids are commercially available for such uses.

Another major use of plasmids is to make large amounts of proteins. In this case, bacteria are grown that contain a plasmid harboring the gene of interest. Just as the bacteria produce proteins to confer its antibiotic resistance; it can also be induced to produce large amounts of proteins from the inserted gene. This is a cheap and easy way of mass–producing a gene or the protein it then codes for, for example, insulin or even antibiotics.

Desired genes can be inserted in the plasmid and bacteria can be made to express the phenotype of the gene, and through genetic engineering one can design bacteria for decomposition of xenobiotics, waste water treatment, and many other works. Moreover, plasmids can be good tools for introducing supplementary copies of defective gene to cure hereditary diseases in both human as well as in animals.