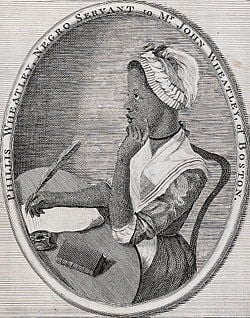 Phillis Wheatley, as illustrated by Scipio Moorhead in the frontispiece to her book Poems on Various Subjects.

Phillis Wheatley (1753 – December 5, 1784) was the first African American female writer to be published in the United States. Her book Poems on Various Subjects was published in 1773, two years before the American Revolutionary War began, and is seen as one of the first examples of African-American literature. After Anne Bradstreet she was the only other woman to be published in colonial America. Phillis Wheatley came to America on a slave ship and died in abject poverty; however, her works left an indelible impression that sowed the seeds for the advocacy of abolition in America.

Although her poetry about the colonies' struggle for freedom from Great Britain echoes her own thoughts on liberty, she rarely drew attention to her personal circumstances or to issues of race. Rather her poems are primarily an expression of her religious zeal and her ardent faith in God.

Phillis Wheatley was born in Gambia, now Senegal, on the West Coast of Africa. As a young girl, aged seven, she was kidnapped and sold into slavery. She was given the name "Phillis" after being purchased in Boston, Massachusetts in 1761, by John Wheatley, who bought her to be a maidservant for his wife. There is no record of her African name, nor is there any record of her exact birthday other than the year.

Susannah Wheatley saw the young girl as her protegee and encouraged her education, unheard of in those times for African Americans. At the age of nine she was transcribing difficult passages from the Bible. She was also tutored in geography and mathematics, but poetry was her favorite subject. She especially admired the works of Alexander Pope and her early poems are imitative of his style. She became well versed in Latin and Greek classics, even later producing an English translation of Ovid's Metamorphoses. At age fourteen she published her first poem in the colonial newspaper, the Newport Mercury.

Phillis Wheatley's circumstances were different than most black slaves of that time because of her education. It was illegal to even teach "Negroes" to read or write in the antebellum South; however, life for blacks in the industrial North was somewhat easier.[1] She lived between two worlds, and as such did not always fit into either one. Church became her refuge and a strong influence in her life. The fact that Wheatley was familiar with the classics shows that she most likely had access to the extensive library of her church, the Old South Church in Boston, one that holds the distinction of being the site of the town meeting held after the Boston Massacre. As a child prodigy, clergyman and other literati of the day provided her with both encouragement and important books. Such influences included ministers such as Harvard educated Mather Byles, a nephew of the puritan leader Cotton Mather.[2]

Poetry and the Revolutionary War

In 1765, Wheatley witnessed the furor over the Stamp Act—the Bostonians' rebellion against further taxation of their colony. This protest was to be a precursor to the much more violent uprising of the Boston Tea Party. In response to the foment and struggle that she witnessed, Wheatley wrote the poem "America."

Did you know?
Phillis Wheatley was the first African American female writer to be published in the United States

In 1770, she wrote a poem about young Christopher Snider who was killed when a patriot mob descended upon the home of a British informer. Eleven year old Snider was accidentally shot and killed, an incident that shocked both Loyalists and Patriots alike. Wheatley called him the first martyr of the Revolutionary War.

That same year Wheatley wrote a poetic tribute to Reverend George Whitefield, a charismatic revivalist minister whose sermons inspired her own poetry writing. The poem received widespread acclaim, particularly in Great Britain, where Whitefield still had many friends and supporters. At the age of 17, she had received recognition on both continents. An excerpt, printed on a handbill that found its way to England, reads:

Unhappy we thy setting sun deplore, which once was splendid, but it shines no more

Her poetry, written in the classical tradition is generally composed in iambic pentameter and heroic couplets. One of the few poems which refers to slavery is "On being brought from Africa to America:"

`Twas mercy brought me from my Pagan land,
Taught my benighted soul to understand
That there's a God, that there's a Saviour too:
Once I redemption neither sought nor knew.
Some view our sable race with scornful eye,
"Their colour is a diabolic dye."
Remember, Christians, Negroes, black as Cain,
May be refin'd, and join th' angelic train.´

Wheatley's poetry overwhelmingly revolves around Christian themes, with many poems dedicated to famous leaders of that era. Over one-third consists of elegies, the remaining have religious or classical themes. Images from nature, particularly the motif of the sun, may reflect her African heritage. She wrote only once about her mother, that she remembers her pouring "out water before the sun at his rising."[3]

The white elite of Boston found it hard to believe that a Negro woman could be an authoress and demanded proof of her education and of the authenticity of her work. In 1772, Wheatley was required to defend her literary ability in court. She was cross-examined by a group of Colonial leaders, including the Reverend Charles Chauncey, John Hancock, Thomas Hutchinson, the governor of Massachusetts, and his Lieutenant Governor Andrew Oliver. They concluded that she had in fact written the poems ascribed to her and signed an attestation which was published in the preface to her book Poems on Various Subjects, Religious and Moral.

Still, Boston printers refused to publish her book. In 1773 she sailed to England, with the Wheatley's son Nathaniel, on what would become a historic journey. Under the patronage of Selina Hastings, Countess of Huntingdon and the Earl of Dartmouth, strong supporters of George Whitefield, she was at last able to find a publisher for her book in London—the first ever published by a black American woman.

In 1775, after the war, Wheatley wrote a poem dedicated to George Washington, then commander-in-chief of the Continental Army. He invited her to visit at his Cambridge headquarters in 1776, where he gave her a private audience. The poem, titled "To His Excellency George Washington," was subsequently published in the Pennsylvania Magazine whose editor was Thomas Paine.

After the death of the Wheatleys, Phillis was granted manumisson—her freedom; however, her difficulties only began at that point. She was unable to sell her book, largely due to the fact that the Revolutionary war years forced Americans to prioritize their expenditures for necessities only. Wheatley then married a free black merchant named John Peters, in 1778. However, he was not successful in business during the difficult war years and eventually abandoned her. Wheatley worked as a domestic worker in the boarding house where she resided but was barely able to support herself. She died, aged 31, on December 5, 1784, and her third child died hours afterwards. Two other children had previously died in infancy.

One of her last poems, published in pamphlet form the year she died, was called "Liberty and Peace." In it the slave poet, who knew freedom a short time, hails the new nation of America.

Wheatley's book Poems on Various Subjects is seen as one of the first examples of African-American literature.[4] Nevertheless, although Wheatley has been credited with simultaneously founding two literary genres, Black-American literature and Black Women's literature, she has also been criticized for not speaking out directly against slavery in her poetry. However, Wheatley in her time walked a fine line between two worlds: Not only between the white educated class and the Negro underclass, but also between the American colonies and England, the mother country. Susannah and John Wheatley were known loyalists, as was their son, Nathaniel, during the years leading up to the Revolutionary war. In fact, England embraced Wheatley's work more wholeheartedly than did the American colonies. It is also interesting to note that England abolished the slave trade sooner than America. However, Phillis Wheatley (who later went by the name Phillis Peters) appeared to have more patriot sympathies. Recent literary scholars have acknowledged that a thread running throughout her poetry and especially her personal letters pertains to the quest for freedom.

Wheatley's legacy includes a period in the modern era where she was criticized by Black scholars and artists for being too influenced by her white mentors to truly be a spokesperson for the "Black experience." Essentially her intellect and talent went from being challenged by whites because she was black to being challenged by blacks for being to close to whites. Henry Louis Gates, Jr., the W. E. B. Du Bois Professor of the Humanities at Harvard University, in his 2002 Jefferson Lectures presentation on Wheatley said:

Think about it: we have moved from a situation where Phillis Wheatley's acts of literacy could be used to demonstrate our people's inherent humanity and their inalienable right to freedom, to a situation where acts of literacy are stigmatized somehow as acts of racial betrayal. Phillis Wheatley, so proud to the end of her hard-won attainments, would weep. So would Douglass; so would Du Bois.[5]

In November 2005, a newly discovered Autograph Letter Signed by Wheatley was acquired by a private collector for $253,000 at a Swann Galleries auction.