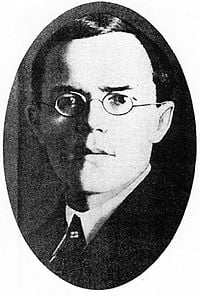 Nikolai Dmitriyevich Kondratiev (also Nikolay Kondratev or Kondratieff; Russian: Николай Дмитриевич Кондратьев) (March 4, 1892 – 1938) was a Soviet economist. He proposed a theory that Western capitalist economies have long term cycles (approximately 50 years) of boom followed by depression. Although Kondratiev himself was imprisoned and executed during the Great Purges of Joseph Stalin, his work was published, translated, and became well-known in the field of economics.

The business cycles he described are now called long waves, grand supercycles, or Kondratiev waves after him. Applications of his ideas to the economies since the Industrial Revolution support his theory, but also indicate that the depression may be averted. As humankind enters an age of greater concern for the well-being and happiness of all, Kondratiev's work is a vital component of the understanding required to establish a prosperous globalized society.

Kondratiev was born on March 4, 1892, in the province of Kostroma, north of Moscow, Russia, into a peasant family.

Before the revolution, he was tutored at the University of Saint Petersburg by Mikhail Tugan Baranovsky. A member of the Revolutionary Socialist Party, his initial professional work was in the area of agricultural economics and statistics and the important problem of food supplies. On October 5, 1917, at the age of 25, he was appointed minister of supply of the last Alexander Kerensky government, which only lasted for several days.

After the revolution, he dedicated his attention to academic research. In 1919, he was appointed to a teaching post at the Agricultural Academy of Peter the Great, and in October 1920 he founded the Institute of Conjuncture, in Moscow. In 1924, after publishing his first book, which presented the first tentative version of his theory of the major economic cycles, Kondratiev traveled to England, Germany, Canada, and the United States, and visited several universities before returning to Russia.

Kondratiev was involved in the development of the first five-year plan for the development of Soviet agriculture. A proponent of the Soviet New Economic Policy (NEP), Kondratiev’s influence on economic policy lasted until 1925, declined in 1926, and ended by 1927. Around this time, the NEP was dissolved by a political shift in the leadership of the Communist Party, Kondratiev was removed from the directorship of the Institute of Conjuncture in 1928, arrested in July 1930, convicted as a "kulak-professor" for his opposition to total collectivization of agriculture, and sentenced to eight years in prison.

Kondratiev served his sentence from February 1932 onwards. Although in poor health due to prison conditions, he continued his research, planning several more publications. Some of his new texts were completed and published in Russian.

On September 17, 1938, during Stalin's Great Purges, he was subjected to a second trial and quickly executed by firing squad. Kondratieff was 46 when he died and was only cleared of all charges almost fifty years later, on July 16, 1987.

The Kondratiev (long-wave) cycle is his major contribution to economic thought, acknowledged by professionals and theorists alike. It is a theory based on study of nineteenth century price behavior, which included wages, interest rates, raw material prices, foreign trade, bank deposits, and other data.

The theory predicts 50-60 years long cycles of economic booms and depressions. Kondratiev was the first to bring these observations to international attention in his book The Major Economic Cycles (1925) and other works written in the same decade.

Kondratiev was convinced that his studies of economic, social, and cultural life proved that a long term order of economic behavior existed and could be used for the purpose of anticipating future economic developments. He observed certain characteristics about the growth and contraction phases of the long wave cycle. Among them, he detailed the number of years that the economy expanded and contracted during each part of the half-century long cycle, which industries suffered the most during the down-wave, and how technology plays a role in leading the way out of the contraction into the next up-wave.

The fifty to fifty-four year cycle of catastrophe and renewal had been known and observed by the Maya of Central America and independently by the ancient Israelites. Kondratiev's observations represent the modern expression of this cycle, which postulates that capitalist countries tend to follow the long rhythmic pattern of approximately half a century.

In the idealized long wave model, which is illustrated in the diagram, the cycle (which averages 54 years in length) begins with the "up-wave" during which prices start to rise slowly along with a new economic expansion. By the end of a 25-30 year up-wave period, inflation is running very high. Its peak sets the stage for a deep recession that jolts the economy. The recession, which begins about the time commodity prices break from their highs, is longer and deeper than any that took place during the up-wave.

Eventually, though, prices stabilize and the economy recovers, beginning a period of selective expansion that normally lasts nearly a decade. Referred to as the secondary plateau, the expansion persists, giving the impression that "things are like they used to be," but its anemic nature eventually takes its toll as conditions within the economy never reach the dynamic state that occurred during the up-wave. The secondary plateau ends with a sudden shock (financial panic and stock market crash) and the economy rolls over into the next contraction phase, which is characterized by deflation and the start of an economic depression (Solomou 2004).

According to the innovation theory, these waves arise from the bunching of basic innovations that launch technological revolutions that in turn create leading industrial or commercial sectors. The theory hypothesized the existence of very long-run macroeconomic and price cycles, originally estimated to last 50-54 years.

Kondratiev viewed depressions as cleansing periods that allowed the economy to readjust from the previous excesses and begin a base for future growth. The characteristic of fulfilling the expectations of the previous period of growth is realized within the secondary depression or down grade. This is a period of incremental innovation where technologies of the past period of growth are refined, made cheaper, and more widely distributed.

Within the down grade is a consolidation of social values or goals. Ideas and concepts introduced in the preceding period of growth, while radical sounding at the time, become integrated into the fabric of society. Often these social changes are supported by shifts in technology. The period of incremental innovation provides the framework for social integration.

Most cycle theorists, backed by the new statistical data “mining” techniques, agree with the "Schumpeter-Freeman-Perez" paradigm of five waves so far since the industrial revolution, and the sixth one to come. These five cycles are identified as:

According to this theory, the beginning of the twenty-first century is the turning-point of the fifth Kondratiev wave.

The reevaluation and almost universal acknowledgment of the Kondratiev Wave began after the global economy pulled out of a deflationary depression in the 1930s. Prices began to accelerate upward after World War II, and reached the commodity price blow-off stage in 1980. Since that time, and then after the recession of 1990-1991 (much longer in some locations such as California and Japan), the global economy has been treading the secondary plateau.

The stock market crash of 1997 was the signal that the period of economic growth along the secondary plateau was ending. Additional economies collapsed and plunged into deflationary contraction, as characterized during this revolution of the Kondratiev cycle by the domino effect coming from Thailand, Indonesia, Asia, and South America. Stronger economies such as those of Europe and North America were able to hang on until the last moment, then fall off into the much less serious deflationary contraction.

From that experience, it appears that the stronger economies, due to their superior handling of monetary policy during the secondary plateau will not be affected as gravely as other countries that made serious enough mistakes to cause a plunge into serious financial collapse. The message of this turn of the Kondratiev cycle, which is a cycle of debt repudiation and not just of commodity price deflation, is that humankind is much more aware of the effects of the cycle than in the 1930s, and that the contraction can be handled.

Much controversy exists as to whether the Kondratiev wave is valid for the post-World War II economy. Many have rejected it on the basis that the 54-year mark was passed at the beginning of the twenty-first century, and that should have been the trough.

It can be argued, however, that the start of the "up" cycle began in 1940 or 1945, rather than 1930. Also, life expectancy has increased in the twentieth century. If the 54-60 year cycle is based on the length of generations, then it would naturally be "stretched" beyond 60 years. Since these cycles of wars and economic birth and renewal occur every second to third generation, it could be said that when the generation that last experienced a depression dies, it is time for another cycle to begin.

Long wave theory is not universally accepted by neo-classical ("standard textbook") economists, who necessarily see technical change and innovation as exogenous rather than endogenous to economics. However, it is one of the bases of innovation-based, development, and evolutionary economics, which is the main heterodox stream in economics.

Among economists who accept the theory, there has been no universal agreement about the start and the end years of particular waves. This points to another criticism of the theory: that it amounts to seeing patterns in a mass of statistics that are not really there. Moreover, there is a lack of agreement as to the cause of this phenomenon.

Kondratiev himself spelled out the problem quite clearly:

Even granting the existence of long waves, one is, of course, not justified in believing that economic dynamic consists only in fluctuations around a certain level. The course of economic activity represents beyond doubt a process of development, but this development obviously proceeds not only through intermediate waves but also through long ones. (Kondratiev 1935)

Kondratiev's legacy lies in his wave theory, the major ideas of which he expressed as follows:

Excesses of the plateau period effect a collapse of the price structure. This exhaustion of accumulated wealth forces the economy into a period of sharp retrenchment. Generally, the secondary depression entails a three year collapse, followed by a 15 year deflationary work out period. The deflation can best be seen in interest rates and wages that have shown a historic alignment with the timing of the Long Wave—peaking with and bottoming at the extremes. (Kondratiev 1935)

The Maya were known for their intricate tracking of cycles such as this one. By embracing the inevitability of the cycle, not as a destiny but as a tendency, they were able to mitigate its effects and emerge from the cycle bottom in better condition that otherwise would have been possible. Will modern humanity in the twenty-first century take heed of the lessons of the past?

If so, this will be the Kondratiev’s greatest achievement and legacy.