McDonald's Corporation is the world's largest fast-food chain, primarily selling hamburgers, chicken, french fries, breakfast products, milkshakes and soft drinks. Beginning in the 1940s as a family-owned restaurant in San Bernardino, California, McDonald's successfully expanded into a corporation under Ray Kroc and has now become a symbol of globalization and the spread of the American way of life.

McDonald's established the "fast food" system of providing quick service and uniform quality to customers. Today, more than 50 million customers are served each day by the company. Traces of its trade mark double arches are seen worldwide in toys, billboards, commercials, as well as in advertising spots in highly publicized events such as the Super Bowl and the Olympic Games. Its prominence has made it a frequent subject of public debates about obesity, corporate ethics and consumer responsibility.

McDonald's was opened in 1940 by brothers Dick and Mac McDonald in San Bernardino, California. Their introduction of the "Speedee Service System" in 1948 established the principles of the modern fast-food restaurant. The present corporation dates its founding to the opening of a franchised restaurant by Ray Kroc, in Des Plaines, Illinois on April 15, 1955, the ninth McDonald's restaurant overall. Kroc later purchased the McDonald brothers' equity in the company and led its worldwide expansion. McDonald's restaurants are now found in 120 countries and territories around the world and serve nearly 54 million customers each day. 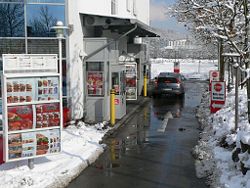 A McDonald's drive-thru in Germany.

Also, most McDonald's restaurants offer drive-through service, which provides an even more convenient means for customers to purchase food from their vehicle. The company first implemented the "Drive-Thru" in Arizona in 1975, following the lead of other fast-food chains.

In 2006, McDonald's made its first major redesign of its restaurants since the 1970s. Changes included a modification of traditional colors, the restructuring of exterior and interior fixtures, and the addition of special features like lounging areas and music.

The McDonald's Corporation's business model is slightly different from that of most other fast-food chains. In addition to ordinary franchise fees, supplies, and percentages of sales, McDonald's also collects rent partially linked to sales. As a condition of the franchise agreement, the Corporation owns the properties on which most McDonald's franchises are located. The UK business model is different, in that fewer than 30 percent of restaurants are franchised, with the majority under the ownership of the company.

According to Fast Food Nation by Eric Schlosser (2001), nearly one of every eight workers in the U.S. has at some time been employed by McDonald's. McDonald's is the largest private operator of playgrounds in the U.S., as well as the single largest purchaser of beef, pork, potatoes, and apples. The selection of McDonald's meats and drinks varies with the culture of the host country.

McDonald's has for decades maintained an extensive advertising campaign. In addition to the usual media (television, radio, and newspaper), the company makes significant use of billboards and signage, sponsors sporting events ranging from Little League to the Olympic Games, and makes coolers of orange drink with their logo available for various local events. However, television has always played the central role in the company's advertising strategy.

McDonald's has become emblematic of globalization, due to its enormous economic and cultural impact in all parts of the world. Its influence is sometimes referred to as the "McDonaldization" of society. For instance, The Economist magazine uses the "Big Mac Index," a list of McDonald's Big Mac prices in countries all over the world, that can be used to compare and informally judge those nations' currencies' purchasing power parity. In addition, because McDonald's is closely identified with the United States’ culture and lifestyle, its international business expansion has been termed part of Americanization and American cultural imperialism as well. 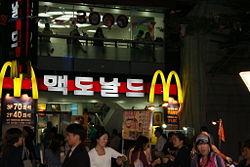 Some observers have suggested that the company should be given credit for increasing the standard of service in markets that it enters. A group of anthropologists in a study entitled Golden Arches East (Stanford University Press, 1998, edited by James L. Watson) looked at the impact McDonald's had on East Asia, and Hong Kong in particular. When it opened in Hong Kong in 1975, McDonald's was the first restaurant to consistently offer clean restrooms, driving customers to demand the same of other restaurants and institutions. In East Asia, McDonald's has become a symbol for the desire to embrace Western cultural norms. McDonald's has recently taken to partnering up with Sinopec, China's second largest oil company, as it begins to take advantage of China's growing use of personal vehicles by opening numerous drive-thru restaurants.

In addition to its effect on business standards, McDonald's has been argued to have affected local customs. Watson's study suggests that by popularizing the idea of a quick restaurant meal, McDonald's has led the easing or elimination of various taboos, such as eating while walking in Japan.

McDonald's restaurants have been the targets of protests, peaceful and otherwise, by environmental, anti-globalization, and animal rights activists. Among the critiques are allegations that McDonald's uses its political influence to increase their own profits at the expense of people's health and the social conditions of its workers.

In 2002, vegetarian groups successfully sued and won against McDonald's for misrepresenting their French fries as vegetarian.[1] In 2004 McDonald's faced allegations that its food was contributing to the epidemic of obesity in American society and that it failed to provide nutritional information about its food to its customers. 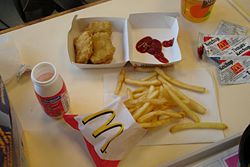 A McDonald’s meal in France

In September 2002, McDonald’s announced it was voluntarily reducing the trans fat content of its cooking oil by February 2003. The oil was not immediately changed, however. In the ensuing lawsuits, McDonald’s was required to inform the public of the fact that the oil had not been changed. In addition, McDonald’s was to donate $7 million to the American Heart Association for public education about the risks of consuming trans fat. As of 2007, McDonald's announced that it had found a trans fat-free oil it deems worthy of its French fries, and planned to be using it for all its fried menu items by early 2008.[2]

The company has also begun a practice of putting nutritional information for all menu items on the reverse of their tray liners and printing nutritional labeling on the packaging of its food items.

In a bid to tap into growing consumer interest in the provenance of food, the company has also switched its supply of both coffee beans and milk. McDonald's coffee is now brewed from beans taken from stocks that have been certified by the conservation group the Rainforest Alliance. Similarly, milk supplies used for its hot drinks and milkshakes have been switched to organic sources which could account for five percent of the UK's organic milk output.[3]

In other cases, the firm has shown itself ready to adjust its business practices. When environmentally damaging packaging and waste produced by the company's restaurants became a public concern, McDonald's started a joint project with Friends of the Earth to eliminate the use of polystyrene containers, only in the United States, and to reduce the amount of waste produced.

Retrieved from https://www.newworldencyclopedia.org/p/index.php?title=McDonalds&oldid=686897
Categories:
Hidden category:
This page was last edited on 3 April 2008, at 22:53.
Content is available under Creative Commons Attribution/Share-Alike License; additional terms may apply. See Terms of Use for details.