Saint Martín de Porres (December 9, 1579 – November 3, 1639) was a Catholic monk of mixed raced from Peru and the first "black" person admitted to the Dominican Order. He became famous for his miraculous cures and service to the poor.

Born the illegitimate son of a Spanish nobleman and a former slave from Panama, he grew up in poverty and was taken in as a servant by the Dominicans at the age of 15. His reputation for piety and humility led the Dominicans to suspend the rules against mulattoes joining their order, and he thus became a Dominican monk. His work on behalf of the poor throughout his life was reportedly tireless, and he went on to gain an international reputation as a miraculous healer and servant of the poor, establishing an orphanage and hospital for the impoverished people of Lima. He was a friend and collaborator with his fellow saints, John de Massias and Saint Rose of Lima.

Saint Martin of Porres was beatified in 1837, by Pope Gregory XVI and canonized on May 6, 1962, by Pope John XXIII. The patron of mixed race people, his feast day in the Roman Catholic Church is November 3.

Martin was born in Lima, Peru, as the illegitimate son of a Spanish nobleman and a young, black former slave fromPanama. He also had a younger sister, Juana, born in 1581. Unacknowledged by his father for several years, he grew up in poverty, and his mother struggled to support him and his sister. He was entrusted to a primary school for two years, then placed as an assistant to a barber-surgeon, where his duties allowed him to observe and learn the rudiments of the medical arts. Probably ten years old at the time—the sources do not agree on the dates—he reportedly expressed great joy to be employed in helping others while earning his living.

By this time Martin was already spending hours each night in prayer, a practice which increased rather than diminished as he grew older. He also engaged in the then-respected practice of flagellating himself three times every night, punishing his body both for his own failings, and as a sacrifice for the conversion of pagans and sinners.

At the age of 15, Martin was taken in by the Dominicans as a servant boy at the Holy Rosary Dominican priory in Lima. He was later promoted to almoner, successfully begging more than $2,000 a week to support the priory's work among the poor and sick. In normal times, Martin succeeded with his alms to feed 160 poor persons every day and distributed a remarkable sum of money every week to the indigent. Ever an example of humility and self-sacrifice, Martin retained the mentality of a servant, indeed even of a slave. When his priory was in debt, Martin reportedly implored them: "I am only a poor mulatto, sell me. I am the property of the order, sell me please!"

Despite this effective service to the Dominican Order, racism prevented Martin from taking Holy Orders, since the Dominican constitution held that "no black person may be received to the holy habit or profession of our order." In 1603, his superiors were finally influenced to drop the racial limits on admission to the order, and Martin was made a full Dominican brother. While continuing his work for the poor, he was put in charge of the infirmary, where he gained a reputation for the ability to perform miraculous cures. 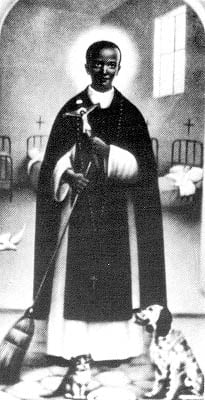 Martin of Porres pictured in an infirmary with broom, dog, cat, crucifix, and rosary.

Among the many miracles attributed to Saint Martin were levitation, bilocation (being in two places at one time), miraculous knowledge, instantaneous cures, and an ability to communicate with animals.

Working with the sick outside his convent, Martin is said to have often effected their healing with only a simple glass of water. One day, an aged beggar, covered with ulcers and almost naked, stretched out his hand, and Martin took him to his own bed, paying no heed to the fact of his condition. One of his fellow monks, considering he had gone too far in his charity, reproved him. Martin is recorded as replying: “Compassion, my dear Brother, is preferable to cleanliness. Reflect that with a little soap I can easily clean my bed covers, but even with a torrent of tears I would never wash from my soul the stain that my harshness toward the unfortunate would create.”

Deeply devoted to the sacrament of the Eucharist, Martin reportedly remained at prayer before the sacramental altar one night despite a fire that broke out, remaining in blissful contemplation while confusion and chaos reigned around him.

When an epidemic struck Lima, 60 residents of the convent took sick, many of them novices in a distant and locked section of the monastery, separated from the those who had taken Holy Orders. Martin reportedly passed through the locked doors to care for them, a phenomenon which was observed in the residence more than once. The ordained monks, too, reported suddenly seeing Marin appear beside them without the doors having been opened.

Martin continued to transport the sick to the monastery until the provincial Superior, alarmed by the contagion threatening the monks, forbade him to continue to do so. His sister, who lived in the country, then offered her house to lodge those whom the small monastery could not hold.

Tradition holds that Martin's humility and devotion to the poor led him on several occasions to bend the rules and gently judge the spiritual standards of his superiors. One day Martin found on the street a poor Indian, bleeding to death from a dagger wound, and took him to his own room until he could transport him to his sister’s hospice. His superior, when he heard of this, reprimanded Martin for disobedience. “Forgive my error, and please instruct me," Martin replied, perhaps with a note of irony, "for I did not know that the precept of obedience took precedence over that of charity.” The superior gave him liberty thereafter to follow his inspirations in the exercise of mercy.

Before becoming a monk, Martin expressed the desire to become a missionary, but he never left his native city. However, even during his lifetime he was reportedly seen elsewhere, in regions as far distant as Africa, China, Algeria, and Japan. An African slave who had been in irons said he had known Martin when he came to relieve and console many like himself in Africa, telling them of heaven. Later the same slave saw Martin in Peru and was very happy to meet him again, asking Martin if he had had a good voyage. Only later did he learn that Martin had never left Lima.

When a merchant from Lima was in Mexico and fell ill, he said aloud: “Oh, Brother Martin, if only you were here to care for me!” Immediately, he saw Martin enter his room. This man, too, did not know until later that Martin had never been in Mexico. 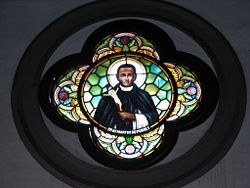 Martin died in Lima in 1639. As his body was displayed to allow the people of the city to pay their respects, each person snipped a tiny piece of his habit to keep as a relic. His body was then interred in the grounds of the monastery.

When he died, Martin was already known as a saint to the city of Lima and the entire region. After his death, the miracles and blessings reportedly received when his name was invoked multiplied in such profusion that his body was exhumed after 25 years and found intact, even supposedly emitting a fine fragrance.

Letters to Rome pleaded for his beatification. A decree affirming the heroism of his virtues was issued, in 1763, by Clement XIII; and Gregory XVI beatified him in 1837. However, it was not until 1962 that Pope John XXIII canonized him as a saint.

In iconography, Martin de Porres is often depicted as a young mulatto priest with a broom, since he considered all work to be sacred no matter how menial. It is also shown with him the dog, the cat and the mouse, eating in peace from their dish. Saint Martin de Porres is the Saint Protector of the mixed race people. He is also considered the patron of black people, hair stylists, innkeepers, Peru, poor people, public education, public health, race relations, social justice, television, Peruvian Naval Aviators, and several other groups and places.