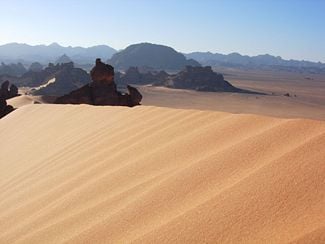 The Libyan Desert, also known as Great Sand Sea or Western Desert, is an African desert that is located in the northern and eastern part of the Sahara Desert and occupies southwestern Egypt, eastern Libya, and northwestern Sudan. Covering an area of approximately 1,200,000 square kilometers (463,320 square miles), it extends approximately 1,100 km from east to west, and 1,000 km from north to south, in about the shape of a rectangle.

This desert is primarily sand and boulder plain and is inhabited by the Senussis, a conservative Islamic group. Rock plateaus and sandy plains extend from eastern Libya into northwestern Sudan. A group of oases enables the cultivation of cereal grains, olives, grapes, and dates. The surface is broken by numerous gorges that were likely caused by erosion linked to cycles of freezing and thawing.

Ridges and deep depressions (basins) exist in several parts of the desert, and no rivers or streams drain into or out of the area. The desert's Jilf al Kabir Plateau has an altitude of about 2,000 meters, an exception to the uninterrupted territory of basement rocks covered by layers of horizontally bedded sediments, forming a massive plain or low plateau.

There are eight important depressions in the Libyan Desert, and all are considered oases except the smallest, Qattara, because its waters are salty. Limited agricultural production, the presence of some natural resources, and permanent settlements are found in the other seven depressions, all of which have fresh water provided by the Nile River or by local groundwater. The Siwa Oasis, close to the Libyan border and west of Qattara, is isolated from the rest of Egypt but has sustained life since ancient times.

The other major oases include Dakhla and Kharga in Egypt, and Jaghbub in Libya, which, along with Siwa, form a topographic chain of basins extending from the Al Fayyum Oasis (sometimes called the Fayyum Depression) which lies sixty kilometers southwest of Cairo, south to the Bahariya, Farafra, and Dakhla oases before reaching the country's largest oasis, Kharga. A brackish lake, Lake Karun, at the northern reaches of Al Fayyum Oasis, drained into the Nile in ancient times. For centuries sweetwater artesian wells in the Fayyum Oasis have permitted extensive cultivation in an irrigated area that extends over 2,100 square kilometers.

The Gilf Kebir plateau, which lies entirely in Egypt, rises about 300 meters (1,000 ft) above the general plain. It roughly equals Switzerland in size and is similar in structure to the other sandstone plateaus of the central Sahara. Its southeastern part is well defined on all sides, with sheer cliffs and deep, narrow wadis. The northeast part, separated from the other half by a broad valley called the "Gap" is more broken and supports three large wadis with vegetation.

The three sand seas, which contain dunes up to 110 meters in height and which cover approximately one quarter of the region include:

Camels were introduced to Northern Africa in the first century C.E. Considering the hyper-arid conditions, the fauna of the central Sahara is richer than is generally believed. Within this ecoregion there are seventy species of mammals, twenty of which are large mammals. There are also ninety species of resident birds (including vultures and hawks) and around one hundred species of reptiles. Arthropods are also numerous, especially ants.

The animals include fennec foxes, rodents, snakes, lizards, insects, and scorpions. The fennec fox has large ears to dissipate heat and hairy soles to protect its feet while crossing the desert in search of lizards and locusts. These kinds of adaptations have allowed them to survive in such an inhospitable environment. Many of the animals get their water only through metabolic processes. Animals may lose 30-60 percent of their body mass and still recover.

The central Sahara is estimated to include only five hundred species of plants, which is extremely low considering the huge extent of the area. Plants such as acacia trees, palms, succulents, spiny shrubs, and grasses have adapted to the arid conditions, either by reducing water loss or storing water. Plant leaves may dry out totally and then recover.

According to archeologists, the Sahara was much more densely populated more than twenty thousand years ago, when the desert's climate was not as arid as it is today. Fossils, rock art, stone artifacts, bone harpoons, shells, and many other items have been found in areas that today are considered too hot and dry to inhabit. The artifacts were located near remains of giraffe, elephant, buffalo, antelopes, rhinoceros, and warthog, as well as those of fish, crocodiles, hippopotamuses, and other aquatic animals, indicating the presence of lakes and swamps in the Sahara.

Between twenty thousand and twelve thousand years ago, severe conditions returned and the Sahara was largely depopulated, except in highland retreats where there were springs and surface pools fed by aquifers. By ten thousand years ago, gatherers and fishers had reoccupied the replenished lakes, streams, and swamps. There are some traces of possible agriculture from eight thousand years ago, and more verifiable evidence of cattle-keeping in the mountains by seven thousand years ago, perhaps in response to more arid conditions. That population would leave again three to four thousand years ago as conditions deteriorated. The Sahara became a largely impenetrable barrier to humans, with only scattered settlements around the oases but little trade. The one major exception was the Nile Valley

Immediately after the last ice age, the Sahara was a much wetter place than it is today. The modern Sahara, though, is not as lush in vegetation, except at a few oases. The region has been this way since about 3,000 B.C.E.

Since ancient times, the Sahara was traversed by Muslim traders and natives. The first modern explorer in the region was the German Friedrich Gerhard Rohlfs. In his daring expeditions in 1865 he received much resistance from the natives of the Saharan oases he visited and was nearly killed in the attempt. All his instruments and scientific records were destroyed. Despite the resistance to all European outsiders at the time, especially by Senussis, Rohlfs managed to come back with several important findings and a first map of the Libyan Desert, though it contained a number of inaccuracies.

In 1924, the Egyptian diplomat Ahmed Hassanein undertook a 2,200-mile (3,500 km) expedition on foot across the Libyan Desert in which he made the first accurate maps and discovered the legendary oases of Jebel Uweinat and Jebel Arkenu. He wrote important accounts on the Senussis, explaining their lifestyle and ethics in his book The Lost Oases. The climax of his expedition was the discovery of unknown water sources that opened new Sahara routes from Kufra to Sudan. He is also remembered for the significant rock art he discovered and photographed depicting animals, including lions, giraffes, ostriches, gazelles and possibly also cattle, evidence of a flourishing human existence ten thousand years ago before desertification drove these mysterious people to the valley of the Nile.

The Senussi (or Sanussi) refers to a Muslim political-religious order in Libya and Sudan founded in Mecca in 1837 by the Grand Senussi, Sayyid Muhammad ibn Ali as-Senussi (1791–1859). Senussi was concerned with both the decline of Islamic thought and spirituality and the weakening of Muslim political integrity. He was influenced by the Wahhabi Movement, to which he added teachings from various Sufi orders. From 1902 to 1913 the Senussi fought French expansion in the Sahara, and the Italian colonization of Libya beginning in 1911. The Grand Senussi's grandson became King Idris I of Libya in 1951. In 1969, King Idris I was overthrown by a military coup led by Colonel Muammar al-Qaddafi. A third of the population in Libya continues to be affiliated with the Senussi movement.

The Senussi order has been historically closed to Europeans and outsiders, leading reports of their beliefs and practices to vary immensely.

Finding the opposition in Mecca too powerful the Grand Senussi settled in Cyrenaica, Libya, in 1843, where in the mountains near Derna he built the Zawia Baida ("White Monastery"). There he was supported by the local tribes and the Sultan of Wadai, and his connections extended across the Maghreb.

The Grand Senussi did not tolerate fanaticism and forbade the use of stimulants as well as voluntary poverty. Lodge members were to eat and dress within the limits of Islamic law and, instead of depending on charity, were required to earn their living through work. No aids to contemplation, such as the processions, gyrations, and mutilations employed by Sufi dervishes, were permitted. He accepted neither the wholly intuitive ways described by Sufi mystics nor the rationality of the orthodox ulema; rather, he attempted to achieve a middle path. The Bedouin tribes had shown no interest in the ecstatic practices of the Sufis that were gaining adherents in the towns, but they were attracted in great numbers to the Senussis. The relative austerity of the Senussi message was particularly suited to the character of the Cyrenaican Bedouins, whose way of life had not changed much in the centuries since the Arabs had first accepted the Prophet Mohammad's teachings.

In 1855 Senussi moved farther from direct Ottoman surveillance to Al-Jaghbub, a small oasis some 30 miles northwest of Siwa. He died in 1860, leaving two sons, Mahommed Sherif (1844-1895) and Mohammed al-Mahdi, to whom was passed the succession.

Sayyid Muhammad al-Mahdi bin Sayyid Muhammad as-Senussi (1845-1902) was fourteen when his father died. Mohammed al-Mahdi had the authority of a sovereign in a vast but almost empty desert. The string of oases leading from Siwa to Kufra and Borku were cultivated by the Senussites, and trade with Tripoli and Benghazi was encouraged.

Although named Al Mahdi by his father, Mohammed never claimed to be the Mahdi (the Promised One), although he was regarded as such by some of his followers. His growing fame made the Ottoman regime uneasy and drew unwelcome attention. In most of Tripoli and Benghazi his authority was greater than that of the Ottoman governors. In 1889 the sheik was visited at Al-Jaghbub by the pasha of Benghazi, accompanied by Ottoman troops. This event showed the sheik the possibility of danger and led him to move his headquarters to Jof in the oases of Kufra in 1894, a place sufficiently remote to secure him from a sudden attack.

By this time a new danger to Senussi territories had arisen from the colonial French, who were advancing from the Congo toward the western and southern borders of Wadai. The Senussi kept them from advancing north of Chad.

In 1902 Mohammed al-Mahdi died and was succeeded by his nephew Ahmed-el Sherif, but his adherents in the deserts bordering Egypt maintained for years that he was not dead. The new head of the Senussites maintained the friendly relations of his predecessors with Wadai, governing the order as regent for his young cousin, Mohammed Idris (King Idris I of Libya), who was named Emir of Cyrenaica by the British in 1917. The Senussi, encouraged by the Turks, played a minor part in World War I, fighting a guerrilla war against the British and Italians in Libya and Egypt.

Retrieved from https://www.newworldencyclopedia.org/p/index.php?title=Libyan_Desert&oldid=1083949
Categories:
Hidden category:
This page was last edited on 25 October 2022, at 22:35.
Content is available under Creative Commons Attribution/Share-Alike License; additional terms may apply. See Terms of Use for details.