Kurt Josef Waldheim (December 21, 1918 – June 14, 2007) was an Austrian diplomat and conservative politician. He was the fourth secretary-general of the United Nations, serving from 1972 to 1981. As secretary-general, Waldheim oversaw the largest relief operations the United Nations had ever undertaken, providing relief in Bangladesh and in drought-affected areas of Africa.

Following his election as president of Austria, allegations surfaced regarding his proximity to war crimes during World War II, which cast a shadow on his legacy as a world leader.

Kurt Waldheim was born in Sankt Andrä-Wördern, a village near Vienna, Austria, on December 21, 1918. His father was a Roman Catholic school inspector and an active Christian socialist.

Kurt attended the Vienna Consular Academy, graduating in 1936. During this time he was considered politically non-partisan. Later he attended the University of Vienna, where he graduated with a degree in jurisprudence.

Waldheim and his wife Elisabeth had three children.

Shortly after the annexation of Austria into the German Reich in 1938, Waldheim applied for membership in the National Socialist German Student Union (known by its German initials as the NSDStB). Later, he became a registered member of the mounted corps of the Sturmabteilung (SA) (stormtroopers). He denied having actually signed any registration forms for SA membership.

In early 1941, Waldheim was drafted into the Wehrmacht and sent to the Eastern Front. He served as a squad leader. Sometime early in 1941 he was wounded. According to his autobiographies, Waldheim was given a medical discharge and returned to Vienna to pursue his doctoral studies in law.

Continuing Service in the Balkans

Documents later came to light revealing that Waldheim's military service continued much later than 1941. According to these documents, by 1943 he was serving in the capacity of Ordonnanzoffizier (special duty officer) in Army Group E under the command of General Alexander Löhr. Lohr was an Austrian military officer, executed in 1947 as a war criminal for his roles in suppressing uprisings by Yugoslavian partisan forces and arranging the deportations of 40,000 Thessaloniki Jews to Auschwitz.

Waldheim was stationed for a time in Thessaloniki, as Oberleutnant for counter-insurgency efforts (Feindaufklärung) to General Löhr. In 1986, Waldheim said that he served as an interpreter and a clerk under General Löhr and had no knowledge of either reprisal enacted against civilians locally or of large-scale massacres in neighboring provinces of Yugoslavia. But Waldheim's account is contradicted by intelligence reports and eyewitness accounts that affirmed he was present at staff meetings where such matters were routinely discussed.

In 1945, Waldheim surrendered to British forces in Carinthia, in southern Austria. He told the British he had fled his command (Army Group D), where he had been serving with General Löhr. At the same time, Löhr was seeking a special deal with the British. Questions were eventually raised about Waldheim's truthfulness regarding his World War II service.

Waldheim joined the Austrian diplomatic service in 1945, after finishing his studies in law at the University of Vienna. He served as first secretary of the legation in Paris from 1948 and in the ministry for foreign affairs in Vienna from 1951 to 1956. In 1956, he was made ambassador to Canada, returning to the ministry in 1960, after which he became the permanent representative of Austria to the United Nations in 1964. During his tenure as permanent representative of Austria to the UN, Waldheim served as chairman of the Committee on the Peaceful Uses of Outer Space. For two years beginning in 1968, he was the federal minister for foreign affairs in Austria, serving for the Austrian People's Party. Also in 1968, Waldheim was elected president of the first UN Conference on the Exploration and Peaceful Uses of Outer Space. He became Austria's permanent representative to the UN again in 1970. In addition, Waldheim was elected to the post of chairman of the Safeguards Committee of the International Atomic Energy Agency (IAEA).

Waldheim ran for president of Austria but was defeated in the presidential elections in 1971. Soon afterwards he was elected to succeed U Thant as United Nations secretary-general that same year.

For the first few years as UN secretary-general, Waldheim made a point to visit areas of the world that the United Nations was particularly concerned about. He traveled to South Africa and Namibia in March of 1972 in search of solutions to difficulties in these nations. Waldheim visited Cyprus three times in June 1972, August 1973, and August 1974. He held discussions with government leaders in Cyprus and inspected UN peacekeeping forces there.

During an official visit to central Asia in February 1973, Waldheim met with the governments of India, Pakistan, and Bangladesh to explore ways and means to overcoming the consequences of the war between India and Pakistan. The United Nations Relief Operation in Bangladesh, the largest relief operation undertaken by the United Nations, was underway at the time. Waldheim took time to visit and inspect these relief operations.

The Middle East was also an area in need of peace. Waldheim visited Syria, Lebanon, Israel, Egypt, and Jordan in August of 1973. He met with the leaders of these nations again in June of 1974. Waldheim visited Syria, Israel, and Egypt in November that same year in conjunction with the extended mandate of the United Nations Disengagement Observer Force (UNDOF). During these visits, he took time to inspect the UN peacekeeping forces in these areas. 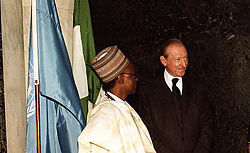 Kurt Waldheim meeting with President Shehu Shagari of Nigeria at the United Nations in 1980.

In February and March of 1974, Secretary-General Waldheim visited the Sudano-Sahelian region of Africa where UN relief operations were assisting victims of prolonged drought.

He was re-elected for a second term in 1976 despite some opposition.

Secretary-General Waldheim enjoyed a close association with Pope John Paul II. Almost as soon as the new pope was appointed in October of 1978, Waldheim invited Pope John Paul II to address the United Nations. The pope gladly accepted the invitation and addressed the 34th General Assembly in the fall of 1979. Pope John Paul II proved a loyal friend to Waldheim.

In 1981, Waldheim's bid for a third term as secretary-general was blocked by a veto from China. He was succeeded by Javier Pérez de Cuéllar of Peru.

Presidency of Austria and the Waldheim Affair

Although Waldheim had unsuccessfully sought election as president of Austria in 1971, his second attempt on June 8, 1986, proved successful. It also marked the beginning of what became known as the Waldheim affair.

Before the presidential elections, the Austrian weekly news magazine Profil revealed that there had been several omissions about Waldheim's life between 1938 and 1945 in his recently published autobiography. A short time later, it was revealed that Waldheim had not been forthright about his service as an officer in the Sturmabteilung (SA)-Reitercorps (Stormtroopers – Cavalrycorps), and his time as an ordnance officer in Saloniki, Greece, from 1942 to 1943. Instead, Waldheim had stated that he was wounded and had spent the last years of the war in Austria. Speculation grew, and Waldheim was accused of being either involved or complicit in war crimes.

Throughout his term as president of Austria (1986–1992), Waldheim, and his wife, Elisabeth, were deemed personae non gratae by many countries. In 1987, they were put on a watch list of persons banned from entering the United States. In the six years Waldheim was in office, he visited the Middle East and the Vatican, but did not visit any other European states or the United States.

Because of the ongoing international controversy, the Austrian government decided to appoint an international committee of historians to examine Waldheim's life between 1938 and 1945. Their report cited evidence of Waldheim's knowledge about preparation for war crimes but denied any personal involvement in those crimes.

According to a controversial book by Jewish-American author Eli Rosenbaum, the Austrian government and a number of media outlets vigorously opposed the allegations against Waldheim both before and after the release of the report.[1]

It has been suggested that the opposition that Waldheim faced as a result of suspicions about his connections to World War II atrocities may have been an avenue for vendetta towards him for trying to lead the United Nations in an impartial way, sometimes siding with second and third world nations against the superpowers. Two prior presidents of the Federal German Republic, Walter Scheel and Karl Carstens were admitted card-carrying members of the National Socialist German Worker's Party, but the American government did not protest against them or forbid them from entering the United States. Waldheim was not a member of the Nazi party, in fact, his family, particularly his father, had been brutally persecuted by the Nazis.

In reality, people living under a totalitarian state can not avoid contact with a one party regime. The truth about Waldheim's association is not a simple matter. The shadows of suspicion still impacted how he was perceived as president of Austria and limited his ability to function on the world stage.

Retrieved from https://www.newworldencyclopedia.org/p/index.php?title=Kurt_Waldheim&oldid=1012368
Categories:
Hidden category:
This page was last edited on 16 June 2018, at 15:16.
Content is available under Creative Commons Attribution/Share-Alike License; additional terms may apply. See Terms of Use for details.