Kodiak Island is mountainous and heavily forested in the north and east, but fairly treeless on the south. The island has many ice-free, deep bays that provide sheltered anchorages for boats. The southwestern two-thirds of the island, like much of the Kodiak Archipelago, is part of Kodiak National Wildlife Refuge.

The most productive fishing grounds in the world surround Kodiak Island, and its most important industry is fishing. Fisheries include Pacific salmon, Pacific halibut, and crab. The Karluk River is famous for its salmon run. Logging, ranching, numerous canneries, and some copper mining are also prevalent. The Kodiak Bear and the king crab are native to the island.

Kodiak Island is replete with spectacular natural beauty. Its generally mild coastal weather and level of precipitation has created a wilderness ideally suited for land, sea and and marine life. Both locals and visitors lovingly call it the "Emerald Isle" due to the lush vegetation that carpets the terrain. 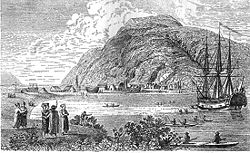 The settlement of Grigory Shelikhov on Kodiak Island.

Alaska's geographical position is at the crossroads between Asia and the Americas. Archaeologists believe that Alaska was the crossing point for the original settlers of the American continent from Asia about 12,000 years ago. The state has three racially distinct Native populations; the Aleut, the Eskimo, and the Indian peoples. The Alutiiq, an Eskimo people, make up the inhabitants of Kodiak Island as well as the Kodiak Archipelago, and the surrounding regions of Prince William Sound, the outer Kenai Peninsula, and the Alaska Peninsula. These native inhabitants lived in sod houses lit by stone oil lamps. Skin-covered kayaks equipped with sophisticated harpoons were their tools in hunting sea mammals. Their (waterproof) clothing was fashioned from seal intestines, beach grass, and sinew.

Kodiak Island was explored in 1763 by Russian fur trader Stepan Glotov. The island was the location of the first permanent Russian settlement in Alaska, founded by Grigory Shelikhov, a fur trader, on Three Saints Bay in 1784 near the present-day village of Old Harbor. The settlement was moved to the site of the present-day city of Kodiak in 1792 and became the center of Russian fur trading.

Under Russian domination, the native peoples were forced to work in "artels"—camps dedicated to sea otter hunting, salmon fishing, and whaling. The Russian clergy introduced the Orthodox faith, which remains a strong force in many Native communities. It is estimated that the island's Native population plummeted from about 9,000 people at contact to just 3,000 by the middle of the nineteenth century, due in large part to infectious diseases to which they had developed no natural immunity.[1]

Following the 1867 purchase of Alaska, the island became part of the United States; Americans settled there and engaged in hunting and fox-farming. Development of the modern fishing industry has characterized the island's history since this time. Many of the native peoples have gradually moved from a subsistence lifestyle into the western market economy.

In 1912 the eruption of Novarupta on the mainland (erroneously attributed at one time to the more famous Mount Katmai) blanketed the island with volcanic ash, causing widespread destruction and loss of life. The island was also hit by the 1964 Good Friday Earthquake and tsunami, which destroyed much of the town of Kodiak.

In 1971, the Alutiiq participated in the Alaska Native Claims Settlement Act, regaining ownership of traditional lands and forming for-profit corporations.[1] 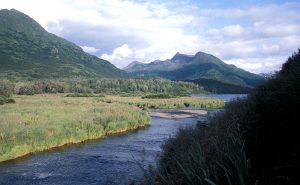 Kodiak is the largest Alaskan island and the second largest island in the United States. Covering an area of 3,588 square miles (9,293 square km), it is 100 miles (160 km) long and 10 to 60 miles (16 to 100 km) wide. Together with Afognak, Shuyak, and a number of other nearby islands, it forms an archipelago that is an extension of the Kenai Mountains.[2]

Most of the island is categorized as uplands. The heavily forested eastern coast reaches an elevation of 5,000 feet (1,500 meters). Valleys and lower slopes are covered by sand and gravel from glaciers. The southwestern part of the island, however, is essentially moist tundra, with its vegetation differing from the rest of the island.

Kodiak Island is part of the Kodiak Archipelago, (group of islands) south of the mainland of Alaska. It is about 252 miles (405 km) by air south of the city of Anchorage in the Gulf of Alaska.

Kodiak is the archipelago's largest island. To its north is the second largest island, Afognak, which has been extensively logged. Further north is Shuyak—an island of deep bays which is now in conservation. South of Kodiak are Tugidak and Sitkinak.

The archipelago is about 177 miles (285 km) long and 67 miles (108 km) across, from the Barren Islands on the north to Chirikof Island and the Semidi Islands group on the south. The archipelago contains 5,363 square miles (13,890 sq km) of land. There are about 40 small glaciers, numerous streams and hundreds of species of land and marine animals. Much of its land is forested.

The Kodiak Island Burough contains all of the Kodiak Archipelago and some lands on the mainland. The Kodiak National Wildlife Refuge encompasses a large percentage of the land in the archipelago. 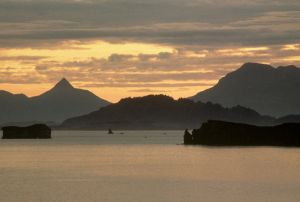 The Kodiak National Wildlife Refuge is a wilderness area in the Kodiak Archipelago. The Refuge includes the southwestern two-thirds of Kodiak Island, Uganik Island, the Red Peaks area of Afognak Island and all of Ban Island in the archipelago. It encompasses about 3,000 square miles (7,700 sq km).

The refuge contains seven major rivers and about 100 streams. It is a spawning ground for all six species of Pacific Ocean salmon, trout and several other fish species, as well as a nesting ground for 250 species of bird, many of which feed on salmon.

The refuge has only six native species of mammals: Kodiak brown bear, red fox, river otter, ermine, little brown bat and tundra vole. The non-native mammals Sitka deer, mountain goat, snowshoe hare and beaver were introduced to the archipelago between the 1920s and 1950s and are now hunted and trapped.

The climate of the refuge is that of southern Alaska, mild and rainy. Many areas in the refuge are densely forested with Sitka Spruce at lower elevations. There are grasslands in drier areas and at higher elevations. The refuge contains several small glaciers.

The refuge has no road access from outside and contains no roads. 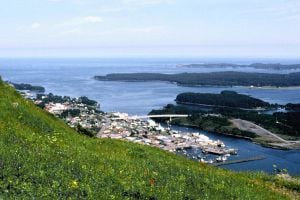 View of city of Kodiak from Pillar Mountain.

The United States Coast Guard and its related entities are the largest employers on Kodiak Island, with 35 percent of the workforce involved. The seafood industry, including fish harvesting and seafood processing, is the next largest employment sector, with 27 percent.[3]

The United States Coast Guard (USCG) is a branch of the United States military and one of seven uniformed services. It is unique among other armed forces in that it is a combination of a maritime law enforcement agency (with jurisdiction both domestically and in international waters), a military branch, and a federal regulatory agency. It is an agency of the United States Department of Homeland Security.

The Coast Guard's largest facility is in Kodiak. Between its operating and support commands, there are approximately 1,300 military and civilian personnel (government workers) and 1,700 military dependents on the island. 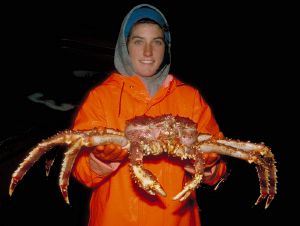 The most productive fishing grounds in the world surround Kodiak Island, which serves as the "homeport" to more than 700 commercial fishing vessels. It is the state's largest fishing port, as well as home to some of Alaska's largest trawl, longline, and crab vessels. It is also consistently one of the top fishing ports in the United States both in terms of quantity and value.

The center of fishing activities for the Gulf of Alaska, its fishery is among the most diverse in the state, with at least 27 different fisheries not including the numerous groundfish fisheries (which are lumped together in a single category by the Commercial Fisheries Entry Commission).

The early nineteenth century saw the construction of the first salmon cannery in Karluk, built by the Russians. Salmon continues to be a mainstay of its fisheries.

Retrieved from https://www.newworldencyclopedia.org/p/index.php?title=Kodiak_Island&oldid=1010934
Categories:
Hidden category:
This page was last edited on 21 April 2018, at 20:45.
Content is available under Creative Commons Attribution/Share-Alike License; additional terms may apply. See Terms of Use for details.