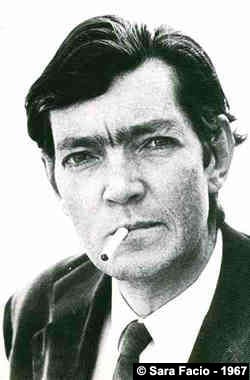 Julio Cortázar (August 26, 1914 – February 12, 1984) was an Argentine intellectual and author of highly experimental novels and short stories who is considered to be one of the most important authors in the history of South American magic realism. Deeply influenced by Jorge Luis Borges, Cortazar created in his fiction worlds where the laws of ordinary reality are almost always subverted by the surreal and the fantastical. In addition to bending the laws of reality, Cortazar's fiction, his novel Hopscotch in particular, is notable for its highly innovative experiments with form: Hopscotch is written as two stories interweaved, one of which can be followed by reading the chapters in sequential order, and the other of which requires the reader to "hop" across the book according to a random sequence of numbers.

Along with Borges, Cortazar is often considered to be one of the most important Argentinian writers of the twentieth century, and his influence on the development of magic realism and surrealism in literary fiction is inestimable.

Julio Cortázar was born to Argentine parents on August 26, 1914, in Brussels, Belgium, where his father was involved in a commercial venture as part of Argentina's diplomatic presence. Because the Cortázar family were nationals of a neutral country not involved in the First World War, they were able to pass through Switzerland and later reach Barcelona, where they lived for a year and a half. Cortázar regularly played at the Park Güell, and its colorful ceramics would remain vivid in his memory for many years.

When Cortázar was four-years-old, his family returned to Argentina where he spent the rest of his childhood in Banfield, near Buenos Aires, together with his mother and his only sister, who was a year his junior. During his childhood, Cortázar's father abandoned the family; Cortázar would never see him again. In Banfield, Cortázar lived in a house with a yard out back from which he obtained inspiration for future stories. His time in Banfield, however, was not happy; he would later describe it, in a letter to Graciela M. de Solá (4 December, 1963) as "full of servitude, excessive touchiness, terrible and frequent sadness."

Cortázar was a sickly child who spent much of his childhood in bed where reading became his great companion. His mother selected the books for him to read, introducing her son most notably to the works of Jules Verne, whom Cortázar admired for the rest of his life. He was to say later, in the magazine Plural (issue 44, Mexico City, 5/1975) "I spent my childhood in a haze full of goblins and elfs, with a sense of space and time that was different to everybody else's."

Although he never completed his studies at the University of Buenos Aires where he studied philosophy and languages, he taught in several provincial secondary schools. In 1938, he published a volume of sonnets under the pseudonym Julio Denis. He would later disparage this volume. In 1944, he became professor of French literature at the National University of Cuyo, in Mendoza, Argentina. In 1949, he published a play, Los Reyes (The Kings), based on the myth of Theseus and the Minotaur.

In 1951, as a statement of his opposition to the government of Juan Domingo Perón, Cortázar emigrated to France, where he lived until his death. From 1952, he worked for UNESCO as a translator. His translation projects included Spanish renderings of Daniel Defoe's Robinson Crusoe, Marguerite Yourcenar's Mémoires d'Hadrien, and the stories of Edgar Allan Poe. Alfred Jarry and Lautréamont were other decisive influences on Cortazar during this period.

In later years, he underwent a political transformation, becoming actively engaged with leftist causes in Latin America, openly supporting the Cuban Revolution and the Sandinista government in Nicaragua.

Cortázar died, reportedly of leukemia, in Paris in 1984 and was interred there in the Cimetière de Montparnasse.

Cortázar is highly regarded as a master of the fantastical short story, with the collections Bestiario (1951) and Final de Juego (1956) containing many of his best examples in the genre, including the remarkable "Continuidad de los Parques" and "Axolotl," in which the narrator, obsessed with the hopeless and seemingly useless species of axolotls, suddenly finds himself turned into one. These collections received early praise from Álvaro Cepeda Samudio, and selections from the two volumes were published in 1967 in English translations by Paul Blackburn, under the title End of the Game and Other Stories (in later editions, Blow-Up and Other Stories, in deference to the English title of Antonioni's celebrated film of 1966 of Cortázar's story Las babas del diablo.)

Cortazar also published several novels, including Los premios (The Winners, 1965), Rayuela (Hopscotch, 1966), El libro de Manuel (A Manual for Manuel, 1978), and Nicaragua tan violentamente dulce (1983). Recognizing his importance to the development of the genre in Latin America, emancipating it from European traditions and pioneering the style of contemporary Latin American fiction, Carlos Fuentes dubbed Cortazar "the Simón Bolívar of the novel."

Cortázar's masterpiece, Hopscotch, is a dazzling literary experiment that ranks among the best novels written in Spanish in the past century and has been praised by other Latin American writers including Gabriel García Márquez, Mario Vargas Llosa, and José Lezama Lima. The novel, which loosely recounts the story of Argentine expatriate Horacio Oliveira's exile in Paris and his subsequent return to Buenos Aires, has an open-ended structure that invites the reader to choose between a linear reading or a non-linear one that interpolates additional chapters. Cortázar's employment of interior monologue, or stream of consciousness, is reminiscent of the Modernists, but his main influences were Surrealism and the French Nouveau roman as well as the improvisatory aesthetic of jazz.

Although his poetic and dramatic production is generally considered inferior to his fiction, he also published poetry, drama, and various works of non-fiction. One of his last works was a collaboration with his third wife, Carol Dunlop, entitled The Autonauts of the Cosmoroute; it related, partly in mock-heroic style, the couple's extended expedition along the autoroute from Paris to Marseille in a Volkswagen beetle.