The Juan Fernández Islands are a sparsely inhabited island group in the South Pacific Ocean. The archipelago is located about 667 kilometers (414 mi) off the coast of Chile. Administratively, the islands belongs to the Region of Valparaíso and forms one of the nine municipalities of the province of Valparaíso, named Juan Fernández.

The population of the Juan Fernández Islands are completely reliant on tourism and lobster fishing. They are considered to be scientifically important because of their widely varied species of flora and fauna. More than 60 percent of the native plants are indigenous to the archipelago, including 12 genera and one family (Lactoridaceae). Six species of seabirds breed there, of which two are native to the islands, and another two are Chilean indigents. The islands were designated a Chilean National Park in 1935 and a UNESCO International Biosphere Reserve in 1977. They were nominated for World Heritage Site status in 1995.

The Juan Fernández Islands are also well known as being the home of marooned sailor Alexander Selkirk for four years. Selkirk's story is believed to have been the inspiration behind Daniel Defoe's novel, Robinson Crusoe.

Islands of the archipelago 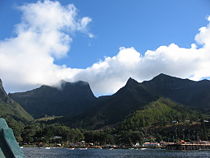 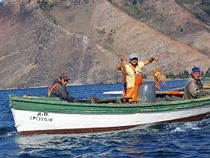 A fisherman with two spiny lobsters off Robinson Crusoe Island

There is a population between 500-600 living in the village of San Juan Bautista. The community maintains a rustic serenity dependent on the spiny lobster trade. The island welcomes several hundred tourists per, with scuba diving gaining in popularity.

Alejandro Selkirk Island is the second largest and most westerly island of the group. It is densely wooded and very mountainous. It is marked by ridges and numerous deep ravines lead to a rugged eastern coast off which are tremendous depths. The coastal cliffs are up to 1,000 meters high. The south, west and north sides of the island have sandy strips of beach which extend 0.1 mile offshore in places. The highest peak, Cerro de Los Inocentes, rises to 1,329 metres (4,360 ft) at the of the southwest side of the island.

The island once housed a penal settlement on its central east coast, which was operative from 1909 to 1930. It initially housed 190 criminals. From 1927 to 1930, there were 160 political prisoners on the island.[1] About 20 buildings remain.

Santa Clara is the smallest of the mainland islands in the group. It is located 1.5 km (0.93 mi) from the south coast of Robinson Crusoe Island. The island is 375 metres (1,230 ft) high and the terrain is dry. The majority of the original vegetation on the island has been replaced by shrubs and grasses.

The Juan Fernández Islands are volcanic in origin, and were created by a hotspot in the earth's mantle that broke through the Nazca Plate to form the islands, which were then carried eastward off the hot spot as the Nazca Plate subducted under the South American continent. Radiometric dating indicates that Santa Clara is the oldest of the islands, 5.8 million years old, followed by Robinson Crusoe, 3.8-4.2 million years old, and Alejandro Selkirk, 1.0-2.4 million years old. Robinson Crusoe is the largest of the islands, at 93 km² and the highest peak, El Yunque, is 916 meters. Alejandro Selkirk is 50 km²; its highest peak is Los Inocentes at 1319 meters. Santa Clara is 2.2 km², and reaches 350 meters.

The islands have a subtropical climate, influenced by the cold Humboldt Current which flows northward along the South American coast east of the islands, and the southeast trade winds. The temperature ranges from 3-34 °C, with an annual mean of 15.4 °C. Higher elevations are generally cooler, with occasional frosts on Robinson Crusoe. Rainfall is higher in the winter months, and varies with elevation and exposure; elevations above 500 meters experience almost daily rainfall, while the western, leeward side of Robinson Crusoe and Santa Clara are quite dry. Average annual rainfall is 1081 mm, varying from 318 to 1698 mm year to year. Much of the variability in rainfall depends on the El Niño-Southern Oscillation. 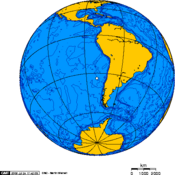 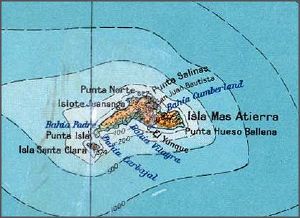 The Juan Fernández Islands are home to a high percentage of rare and endemic plants and animals, and are recognized as a distinct ecoregion. The volcanic origin and remote location of the islands necessitated the islands' flora and fauna reaching the archipelago from far across the sea; as a result, the island has relatively few plants and very few animals. The closest relatives of the archipelago's plants and animals are found in the Temperate broadleaf and mixed forests ecoregions of southern South America, including the Valdivian temperate rain forests, Magellanic subpolar forests, and Desventuradas Islands.

There are 209 native species of vascular plants in the Juan Fernandez Islands, approximately 150 of which are flowering plants, and 50 are ferns. 126 species, or 62 percent, are endemic, with 12 endemic genera and one endemic family, Lactoridaceae. Many plants are characteristic of the Antarctic flora, and are related to plants found in southern South America, New Zealand and Australia.

Alejandro Selkirk Island is mostly covered with grassland from 0-400 meters, interspersed with wooded ravines (quebradas), home to dry forests of Myrceugenia and Fagara. From 400 to 600 meters are lower montane forests, with upper montane forest from 600 to 950 meters. The treeline is at approximately 950 meters, above which is alpine shrubland and grassland, dominated by temperate Magellanic vegetation such as Acaena, Dicksonia, Drimys, Empetrum, Gunnera, Myrteola, Pernettya, and Ugni.

Three endemic species dominate the tall and lower montane forests of the archipelago, Drimys confertifolia on both main islands, Myrceugenia fernandeziana on Robinson Crusoe, and M. schulzei on Alejandro Selkirk. Endemic tree fern species of southern hemisphere genus Dicksonia (D. berteriana on Robinson Crusoe and D. externa on Alejandro Selkirk) and the endemic genus Thyrsopteris (T. elegans) are the predominant species in the tree-fern forests. An endemic species of sandalwood, Santalum fernandezianum, was overexploited for its fragrant wood, has not been seen since 1908, and is believed extinct. The Chonta Palm (Juania australis) is endangered.

The Juan Fernández Islands have a very limited fauna, with no native land mammals, reptiles, or amphibians. Seventeen land and sea-bird species breed on the islands. The island has three endemic bird species, and two endemic subspecies. Robinson Crusoe Island is home to an endemic and endangered hummingbird, the Juan Fernández Firecrown (Sephanoides fernandensis). This large hummingbird, about 11 cm (5 in) long, is thought to number only about 500 individuals. The other endemic bird species are the Juan Fernández Tit-tyrant (Anairetes fernandezianus) of Robinson Crusoe Island, and the Masafuera Rayadito (Aphrastura masafuerae) of Alejandro Selkirk Island. Introduced fauna by humans include rats and goats, which castaway Alexander Selkirk survived on during his four year stay from 1705 to 1709.

The Juan Fernández Fur Seal is known to have existed during the late-1600s on the island with the population of the seals on Alejandro Selkirk Island and Robinson Crusoe Island believed to be in excess of four million by the late 17th century. A census of 1797 estimated a population 2-3 million fur seals.[3] The species was hunted to near extinction by the 1800s and was thought to be extinct for 100 years until 200 were found on the island in 1965. Since then, the population has grown at a steady rate of 15-20 percent every year.[4]

The archipelago was discovered by chance on November 22, 1574, by the Spanish sailor Juan Fernández, who was sailing between Peru and Valparaíso and deviated from his planned course. He called the islands Más Afuera, Más a Tierra, and Islote de Santa Clara.

In the seventeenth and eighteenth centuries, it was used as a hideout for pirates, and provided a location for a penal colony. In the 1740s, it was visited by Commodore Anson's flotilla during his ill-fated venture to the South Seas. 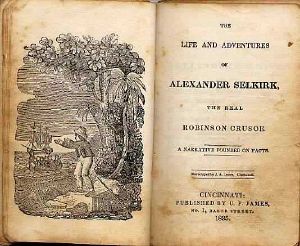 An 1835 book inspired by Selkirk's life.

Alexander Selkirk, a Scottish sailor, joined in with the expedition of privateer and explorer William Dampier in 1703. Dampier was captain of the St. George, and Selkirk served on the companion galleon Cinque Ports, as a sailing master under Thomas Stradling. In October 1704, after the ships had parted ways because of a dispute between Stradling and Dampier, the Cinque Ports was brought by Stradling to the uninhabited archipelago of Juan Fernández for a mid-expedition restocking of supplies and fresh water. Selkirk, who had grave concerns about the seaworthiness of the vessel tried to convince some of his crewmates to desert with him, and remain on the island. He believed they could survive several months until another ship came for restocking. A disagreement arose between Stradling and Selkirk, and the latter was left alone on the island. It was not until February 2, 1709—more than four years later—that Selkirk was rescued. It is generally accepted that Selkirk's adventures as a castaway were the inspiration for Daniel Defoe's masterpiece, Robinson Crusoe.

The location of the archipelago was fixed by Alessandro Malaspina in 1790. Previous charts had differed on the location.[5]

In late 1914, the islands were the rendezvous for Admiral Maximilian von Spee's East Asiatic Squadron as he gathered his ships together prior to defeating the British under Admiral Christopher Cradock at the Battle of Coronel. Following the Royal Navy's revenge at the Battle of the Falkland Islands a month later, the only surviving German cruiser, SMS Dresden, was finally hunted down and cornered at Más a Tierra early in 1915, where she was scuttled after a brief battle with British cruisers.

In 1966, the Chilean government renamed Isla Más Afuera to Alejandro Selkirk Island and Isla Más a Tierra to Robinson Crusoe Island, in order to promote tourism. Incidentally, Selkirk never set foot on Más Afuera, only on Más a Tierra.

In July 30 2007, a constitutional reform gave the Juan Fernández Islands and Easter Island the status of special territories of Chile. The archipelago will continue to be governed as a municipality of the Valparaíso Region.[6]

Species that have been introduced to the islands threaten the naturally occurring species. Introduced animals include goats and rabbits, who have increased erosion throughout the landscape. Wild cats hunt endemic bird species, and have drastically reduced their numbers. Invasive plants, numbering 195 known groups, have displaced local plant life. Habitat loss is occurring through the lumbering of forests. Invasive species coupled with habitat loss have caused the extinction of several plant species, and at least three-quarters of the remaining native plants are threatened or endangered.[7]

The plight of the archipelago's endangered natural systems has been recognized. The International Union for the Conservation of Nature and Natural Resources (IUCN) identified the Juan Fernánez Islands as one of the world's 12 most threatened national parks, and in 1984 the International Council for Bird Preservation (ICBP) designated the islands as one of the 10 highest priority regions for seabird research globally. In 1998, BirdLife International listed the islands as a Priority 1 (critical) Endemic Bird Area of the World. The Alliance for Zero Extinction (AZE) targeted the Juan Fernández Islands as a priority site in 2002, an area in most urgent need of conservation investment to prevent imminent species extinctions.[8]

Since the 1990s the Chilean Government, along with several international organizations, has been involved in projects to educate the local populations on conservation for the native ecosystems. However, the restoration work has not proven sufficient to stall the effects of many aggressive introduced species.[7]

Retrieved from https://www.newworldencyclopedia.org/p/index.php?title=Juan_Fernández_Islands&oldid=1078381
Categories:
Hidden category:
This page was last edited on 8 September 2022, at 02:03.
Content is available under Creative Commons Attribution/Share-Alike License; additional terms may apply. See Terms of Use for details.