James Vernon Taylor (March 12, 1948 - ) is an American singer-songwriter and guitarist, born in Boston, Massachusetts, and raised in Carrboro, North Carolina.

Taylor's career began in the mid-1960s, but he found his audience in the early 1970s, singing sensitive and gentle songs including "Fire and Rain," "Carolina in the Morning," and Carole King's "You've Got a Friend." His work was informed by his battles with heroin and depression-driven stays in psychiatric hospitals. He also had a number of hits covering old R & B songs like "Handy Man" and "How Sweet It Is (To Be Loved by You)."

His 1976 album, Greatest Hits, was certified diamond and has sold more than 11 million copies. He has retained a large audience well into the 1990s and early 2000s, when some of his best-selling and most-awarded albums were released. In 2000, Taylor was inducted into both the Rock and Roll Hall of Fame the Songwriters Hall of Fame. 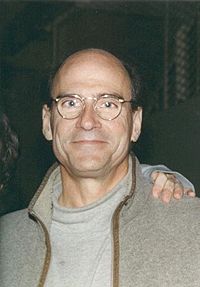 Taylor grew up in Chapel Hill, North Carolina, where his father, Isaac M. Taylor, later served as the dean of the University of North Carolina School of Medicine from 1964 to 1971.

Taylor first learned to play the cello as a child in Chapel Hill, and switched to the guitar in 1960. His style on that instrument evolved from listening to hymns, carols, to Woody Guthrie. He attended Milton Academy, a prep school in Massachusetts, and summered with his family in Martha's Vineyard, where he met guitarist Danny Kortchmar. The two began playing folk music together.

After dropping out of school, he formed a band called the Corsayers with his brother, Alex. Later, he committed himself to McLean Hospital, a psychiatric hospital in Belmont, Massachusetts, for depression, where he subsequently earned a high school diploma from the associated Arlington School.

After graduating, Taylor formed a band called the Flying Machine with Kortchmar and Joel O'Brien in New York City. The band was signed to Rainy Day Records and released one single, "Brighten Your Night with My Day" (B-side: "Night Owl"). The single was not a success. While living in New York, Taylor became addicted to heroin.

In 1968, Taylor moved to London. He was signed to Apple Records after sending a demo tape to Peter Asher (of Peter & Gordon) and released his debut album, James Taylor. Despite the Beatles connection and the presence of Paul McCartney and George Harrison on one track, the album did not sell well, and Taylor's addiction worsened. Moving back to the United States, he checked into the Austen Riggs Center in Western Massachusetts to treat his drug problem. By 1969, he was well enough to perform live, and had a six-night stand at the The Troubadour in Los Angeles. On July 20, 1969, he performed at the Newport Folk Festival. Shortly thereafter he broke both hands in a motorcycle accident on Martha's Vineyard and was forced to stop playing for several months.

Once recovered, Taylor signed to Warner Bros. Records and moved to California, keeping Asher as his manager and record producer. His second album, Sweet Baby James, was a massive success, buoyed by the single "Fire and Rain," a song about his experience in psychiatric institutions and the suicide of his friend, Suzanne Schnerr. The success of this single and the album piqued interest in Taylor's first album, James Taylor, and propelled that album and the single "Carolina In My Mind" back onto the charts.

In 1971, Mud Slide Slim and the Blue Horizon was another hit album for Taylor, and he won a Grammy Award for his version of Carole King's "You've Got a Friend." In 1972, Taylor returned with One Man Dog. In November of the same year, he married fellow singer-songwriter Carly Simon.

His next album, 1974's Walking Man, was a disappointment, but the following offering, Gorilla, was a success due in part to a successful single cover version of Marvin Gaye's "How Sweet It Is (To Be Loved by You)." This was followed by In the Pocket in 1976, and then a greatest hits album that included some re-recordings of Apple Records-era material. It became a huge hit and remains Taylor's best selling album. It was certified Diamond, and to date has sold over 11 million copies.

Taylor then signed with Columbia Records and released JT in 1977, winning a Grammy Award for Best Male Pop Vocal Performance for his cover version of "Handy Man."

After collaborating with Art Garfunkel and briefly working on Broadway, Taylor took a two-year break, reappearing in 1979 with Flag, featuring a Top 40 version of Gerry Goffin and Carole King's "Up on the Roof." 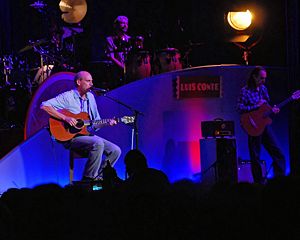 James Taylor at Tanglewood in 2002

In the early 1980s, Taylor's career was again beset by drug problems. After an ultimatum from his wife that he spend more time with their children, Taylor responded with the 1981 album, Dad Loves His Work. He and Simon divorced in 1983.

Taylor reportedly planned to retire in 1985, but a favorable reception from 250,000 fans at a massive festival in Rio De Janeiro buoyed his spirits and caused him to recommit himself to his career. Later that year, Taylor married actress Kathryn Walker, who helped him through recovery from his substance addictions.

In 1988, he released Never Die Young and began touring regularly. Two albums of original material from the 1990s were notably successful. His thirteenth album, New Moon Shine, went platinum in 1991, and he won the Grammy for Best Pop Album in 1998, for Hourglass.

In 2001, Taylor wed for the third time, marrying Caroline ("Kim") Smedvig. The album October Road appeared in 2002, to a receptive audience. The album appeared in two versions, a single-disc version and a "limited edition" two-disc version which contained three extra songs including a duet with Mark Knopfler, "Sailing to Philadelphia." Also in 2002, Taylor teamed with bluegrass musician Alison Krauss in singing "The Boxer" at the Kennedy Center Honors Tribute to Paul Simon. They later recorded the Louvin Brothers duet, "How's the World Treating You?" In 2004, after he chose not to renew his record contract with Columbia/Sony, he released James Taylor: A Christmas Album, with distribution through Hallmark Cards.

Always visibly active in environmental and liberal political causes, in October 2004, Taylor joined the "Vote for Change" tour, playing a series of concerts in American swing states, organized by the left-wing MoveOn.org movement. Taylor's appearances were joint performances with the Dixie Chicks.

In early 2006, Musicares honored Taylor with performances of his songs by an array of notable musicians. In the fall of that year, Taylor released a repackaged version of his Hallmark Christmas album, now entitled James Taylor at Christmas, and distributed by Columbia/Sony. Taylor's performance of Randy Newman's song "Our Town" for the Disney animated film Cars would be nominated for the 2007 Academy Award for the best original song.

On January 1, 2007, Taylor headlined the inaugural concert at the Times Union Center in Albany, New York, honoring newly sworn in Governor of New York Eliot Spitzer. Taylor's next album, One Man Band was released on CD and DVD in November on Starbucks' Hear Music Label.

On November 28–30, 2007, Taylor, accompanied by Carole King, headlined a series of six shows at The Troubadour. The appearances marked the fiftieth anniversary of the venue, where Taylor, King, and many others began their music careers. In January 2008, Taylor recorded some 20 songs for a studio-live Covers. In summer 2008, Taylor and his band toured 34 North American cities with a tour entitled "James Taylor and His Band of Legends."

Taylor has created a unique body of sensitive and gentle work, endowed with careful introspection and personal feelings, which were frequently the product of his battles with heroin and depression-driven stays in psychiatric hospitals. His hit songs, many soft versions of songs previously recorded by other artists, set a standard for thoughtful, easily listenable style.