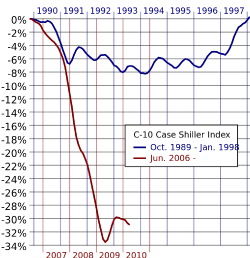 Comparison of the percentage change in the Case-Shiller Home Price Index for the housing corrections in the periods beginning in 2005 (red) and the 1980s–1990s (blue)
The United States housing bubble, a real estate bubble, and its subsequent bursting affected over half of the U.S. states. Housing prices peaked in early 2006, started to decline in 2006 and 2007, and reached new lows in 2012. On December 30, 2008, the home price index reported its largest price drop in its history. The credit crisis resulting from this bursting of the housing bubble is—according to general consensus—the primary cause of the 2007–2009 recession in the United States.
Popular Article: Fire Temple 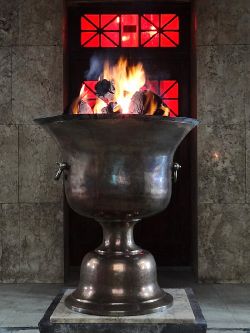 Zoroastrian Eternal Flame at the Fire Temple in Yazd, Central Iran
A Fire Temple is the principle place of worship among Zoroastrians who revere fire as a symbol of divine purity and illumination. In Zoroastrianism, fire, together with clean water, is an agent of ritual purity. These substances are used to produce clean, white ash for purification ceremonies and constitute a central feature in Zoroastrian rituals. When a Zoroastrian adherent enters a fire temple, according to tradition, he or she will offer dry sandalwood (or other sweet smelling wood) to the fire. Zoroastrian Fire Temple attendance is particularly high during seasonal celebrations, and especially for the New Year (Noruz).
Did you know?

Key West, located in the Florida Keys, is the southernmost city of the continental United States and only 94 miles from Cuba (read more)