The Epic of Gilgamesh is an epic poem from Babylonia and arguably the oldest known work of literature. The story includes a series of legends and poems integrated into a longer Akkadian epic about the hero-king Gilgamesh of Uruk (Erech, in the Bible), a ruler of the third millennium B.C.E. Several versions have survived, the most complete being preserved on eleven clay tablets in the library of the seventh-century B.C.E. Assyrian king Ashurbanipal.

The essential story tells of the spiritual maturation of the heroic Gilgamesh, the powerful but self-centered king who tyrannizes his people and even disregards the gods. He is part divine and part human. Through his adventures, Gilgamesh first begins to know himself through experiencing the death of his only friend, Enkidu. Seeking the secret of eternal life, he travels on the archetypal hero's journey, ultimately returning to Uruk a much wiser man than when he left and reconciled to his mortality.

Did you know?
One of the stories in the Gilgamesh epic directly parallels the story of Noah's Great Flood

The epic appears to have been widely known in ancient times and to have influenced important works of literature, from the book of Genesis to The Odyssey. One of the stories included in the epic directly parallels the story of Noah's flood.

Episodes in Gilgamesh foreshadow many other later stories in both Biblical and secular literature:

Even with its missing lines and far from seamless narrative style, the Epic of Gilgamesh is a work of great literature, made all the more wonderful because it predates all others. It is widely read in translation, and its hero has become a minor icon of popular culture.

The following is a summary of each of the tablets from the Epic of Gilgamesh:[1]

When his people complain to the gods that he is too harsh, the gods decide to educate Gilgamesh. The mother goddess Aruru/Ninhursag creates the hairy wild-man Enkidu as a worthy rival. Enkidu lives wild among the gazelles of the forest. Enkidu destroys the traps of a trapper, who discovers him and requests that Gilgamesh send a temple-harlot to ensnare the wild man so the wild beasts will then reject him. Gilgamesh sends Shamhat, the sacred harlot of the goddess Ishtar, who seduces Enkidu into a week-long sexual initiation, in which Enkidu demonstrates unmatched virility. As a result of this encounter, the animals now fear him and flee his presence. Bereft, Enkidu seeks solace from Shamhat who offers to bring him back with her to civilization.

"What is this sleep which has seized you? You have turned dark and do not hear me!"
But Enkidu's eyes do not move. Gilgamesh touched his heart, but it beat no longer.
He covered his friend's face like a bride, swooping down over him like an eagle,
and like a lioness deprived of her cubs, he keeps pacing to and fro.

Gilgamesh and the Flood

The dove went and returned. No landing place came to view, it turned back."]] The marked similarity between the story of Noah's flood and the story told to Gilgamesh by Utnapishtim caused a major stir when the Epic of Gilgamesh was first rediscovered and publicized in the nineteenth century. Utnapishtim's story simultaneously confirmed some aspects of the Biblical account of the flood and yet radically challenged Biblical authority, especially if scholars were correct in their assessment that Gilgamesh pre-dated Genesis.

Details of the two accounts are so nearly identical in some respects that it is virtually impossible to deny that one borrows from the other.

And yet, the differences between the two accounts are also striking. Besides the obvious difference of names, numbers, and places (Utnapishtim vs. Noah, seven days instead of 40, Mount Nimush instead of Mount Ararat, a sparrow instead of a second flight of the dove, etc.), in the Gilgamesh story, Utnapishtim and his wife become immortal, while in Genesis, Noah is the last of mankind's long-lived ancestors—living more than 600 years—but not immortal. More importantly, the Genesis account allows for only one divine actor, while in Gilgamesh the functions of divinity are divided among several gods. Thus, in Gilgamesh, it is not the One God who determines to bring about the flood, but the gods collectively as a Heavenly Council. Utnapishtim receives his warning about the deluge not from Yahweh, but from the water deity Ea/Enki, who is acting against the orders of the Council. In Genesis, the One God shows no remorse after causing the death of the rest of mankind, while in Gilgamesh, Ishtar weeps for her dead children and repents of having supported the idea of the flood in the Divine Assembly.

The question remains: if one of the accounts borrowed from the other, which came first? Did Genesis retell the Gilgamesh account with a monotheistic twist, or did Gilgamesh pervert the true story of Noah's ark into a polytheistic form? Most scholars believe the latter explanation to be unlikely. For those who accept that Gilgamesh is earlier but also maintain that the Biblical story is accurate, one plausible explanation is that God revealed the truth through Genesis, while the Gilgamesh account is a primitive recollection filtered through the polytheistic culture of ancient Mesopotamia.

Gilgamesh and the Fall of Adam

The connection between the serpent who steals the plant of life in Tablet 11 and the serpent in the Garden of Eden story who robs Adam and Eve of access to the tree of life is well known. But there are additional parallels between the Gilgamesh Epic and the story of Adam's fall in Genesis 3. These are more subtle, but appear unmistakably, provided one takes the view that the forbidden "fruit of the tree of knowledge of good and evil" was a euphemism for carnal knowledge and that the fall was a sexual seduction.

The story of Gilgamesh was well-known in the Israel of Solomon's day, when the J-source (Yahwist) most likely wrote Genesis 2-3, according to bible critics. These parallels would have been apparent to Israelites, lending credence to the view that the original meaning of the Fall story was a thinly-disguised account of sexual malfeasance. 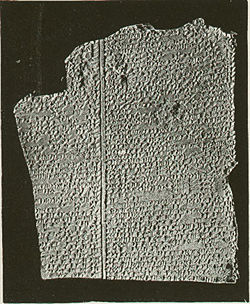 The Deluge tablet of the Gilgamesh epic in Akkadian

Gilgamesh, the son of Lugalbanda, was, according to a Sumerian king list, the fifth king of the city of Uruk, which was located about 155 miles south of modern Baghdad. In Mesopotamian mythology Gilgamesh is credited to have been a demi-god of superhuman strength, (a mythological equivalent to the Greek hero Hercules), who built the great wall of Uruk to defend his people from outer harm.

Gilgamesh's supposed historical reign is believed to have been approximately 2500 B.C.E., 400 years prior to the earliest known written stories. The discovery of artifacts associated with two other kings named in the stories, Agga and Enmebaragesi of Kish, has lent credibility to the historical existence of Gilgamesh.

Scholars believe that the flood myth on the eleventh tablet was largely borrowed from the Epic of Atrahasis. The twelfth tablet, which is sometimes appended to the remainder of the epic, represents a sequel to the original eleven, and was added at a later date. This tablet has commonly been omitted until recent years, as it is in a different style and is out of sequence with the rest of the tablets (e.g. Enkidu is still alive).[3]

According to the Greek scholar Ioannis Kordatos, there are a large number of parallel verses as well as themes or episodes which indicate a substantial influence of the Epic of Gilgamesh on the Odyssey, the Greek epic poem ascribed to Homer.[4]

The first modern translation of the epic was in the 1870s by Assyriologist George Smith. More recent translations include one undertaken with the assistance of the American novelist John Gardner, and published in 1984. Another edition is the two volume critical work by Andrew George whose translation also appeared in the Penguin Classics series in 2003. In 2004, Stephen Mitchell released an edition. While it is highly readable, it is also controversial—being his interpretation of previous scholarly translations into what he calls the "New English version."