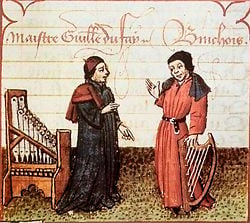 Gilles de Bins dit Binchois (c. 1400 – September 20,1460), was a Franco-Flemish School composer, one of the earliest members of the Burgundian School, and one of the three most famous composers of the early fifteenth century. While often ranked behind his contemporaries Guillaume Dufay and John Dunstable, at least by contemporary scholars, his influence was arguably greater than either, since his works were cited, borrowed and used as source material more often than those by any other composer of the time.

Binchois's emotional French chansons spoke of a nostalgic and traditional courtly life with the nuances of tragedy and unrequited love.

He was probably from Mons, the son of Jean and Johanna de Binche, who may have been from the nearby town of Binche. His father was a councillor to Duke Guillaume IV of Hainault, and also had a position in a church in Mons. Nothing is known about Gilles until 1419, when he became organist at the church of Ste. Waudru in Mons. In 1423 went to live in Lille. Around this time he may have been a soldier in the service of the Burgundians, or perhaps the English William de la Pole, 1st Duke of Suffolk, as indicated by a line in the memorial motet written on his death by Ockeghem.

Sometime near the end of the 1420s he joined the court chapel of Burgundy, and by the time of his motet Nove cantum melodie (1431) he was evidently a singer there, since the text of the motet itself lists all 19 singers.

He retired to Soignes, evidently with a substantial pension for his long years of excellent service to the Burgundian court.

Binchois is often considered to be the finest melodist of the fifteenth century, writing carefully shaped lines that are easy to sing, and utterly memorable; his tunes continued to appear in copies decades later, and were often used as sources for Mass composition by later composers. Most of his music, even his sacred music, is simple and clear in outline, sometimes even ascetic; a greater contrast between Binchois and the extreme complexity of the ars subtilior of the previous century would be hard to imagine. Most of his secular songs are 'rondeaux', which had become the commonest song form of the century; but Binchois rarely writes simple strophic form, instead shaping his melody almost independent of the rhyme scheme of the verse.

Binchois wrote music for the court, secular songs of love and chivalry, music that was expected by the Dukes of Burgundy and that was evidently loved by them.

Retrieved from https://www.newworldencyclopedia.org/p/index.php?title=Gilles_Binchois&oldid=678329
Categories:
Hidden category:
This page was last edited on 2 April 2008, at 03:25.
Content is available under Creative Commons Attribution/Share-Alike License; additional terms may apply. See Terms of Use for details.