ING offers banking, investments, life insurance and retirement services to individuals and institutional investors. It seeks financial growth both by developing new forms of banking and investment, such as online stock brokerages and online banking, and by investing in high-growth businesses and countries with growing economies. Since its formation in 1990, ING Group has expanded through numerous acquisitions, as well as by opening new branches of its existing businesses.

ING Group was created in 1990 by the merger of Nationale-Nederlanden and NMB Postbank Group, two well-established financial institutions in the Nertherlands. Its original parent company was established in 1743.[5]

The Postbank was founded in 1881 by the national government of the Netherlands as the Rijkspostspaarbank (National Postal Savings Bank). It was privatized in 1986, together with the postgiro service, as the Postbank. A merger in 1989 with the NMB Bank led to the creation of NMB Postbank Groepis. It has 7.5 million private account holders and is one of the largest providers of financial services in the country. Postbank provides current and savings accounts, loans, mortgages, insurance, investments, and pensions. Unlike most banks, it has no branch offices but operates completely through mail, internet, telephone, and telebanking, although some operations have traditionally been available through post offices.

In May 2007, ING Group announced the merger of its ING Bank with the Postbank in the Netherlands to form a single brand ING, debuting in 2009.

In addition to insurance, the company also offers banking products such as mortgages. The company is headquartered in The Hague and Rotterdam. The Rotterdam headquarters are located in the Gebouw Delftse Poort, the tallest skyscraper in the Netherlands. Aside from these two central offices, the company has no other branches in the Netherlands; instead NN relies on independent agents to sell its insurance products.

Nationale-Nederlanden is well known as sponsor of the Dutch national football team. Part of ING at night in Minneapolis in the United States

After Nationale-Nederlanden merged with Postbank to form ING Group, the company began a series of acquisitions and expansions, beginning with the opening of its first bank in Romania in 1994. ING opened ING Direct Canada in 1997, and ING Direct USA in 2000. ING Life Bulgaria, a branch of ING Life Hungary, opened in 2006, and in 2008 the group launched retail banking in the Ukraine.

After it announced on October 17, 2008, that it had written off 500 million euros in the third quarter of 2008 from risky loans, following investments in the U.S. of approximately 1.6 billion euros, ING shares lost 27 percent of their value at the Dutch stock exchange. On October 19, 2008, in a move to increase its core Tier 1 capital ratio to 8 percent, ING Group accepted a capital injection plan in which the Dutch government invested €10 billion (US$13.5 billion), in exchange for securities, and veto rights on major ING operations and investments.[6] Wouter Bos, the Dutch finance minister, emphasized that the bank was in a sound financial state and that the government support was intended to fortify the bank so that it could weather the financial crisis. A portion of the €10 billion was allocated to ING Direct, who took over responsibility for £2.5 billion of deposits of 160,000 UK customers with the Icelandic bank Kaupthing Edge, which failed on October 9, 2008.[7]

ING concentrates primarily on offering banking, investments, life insurance and retirement services to individuals and institutional investors. It seeks financial growth both by developing new forms of banking and investment products, such as online stock brokerages and online banking, and by investing in high-growth businesses and countries with growing economies.

ING's headquarters are located near Schiphol airport in Amsterdam. Designed by Roberto Meyer and Jeroen van Schooten, the light-infused building features loggias, patios, and interior gardens. The edifice is supported by posts of 9 to 12 meters (30 to 39ft). It is considered an autonomous building, providing its own power and water supply.

A new ING building opened up in Windsor, CT, in the fall of 2007. It is home to many departments and over 2000 employees. 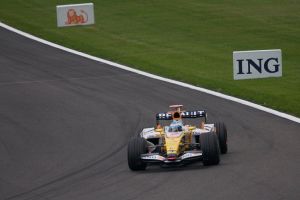 ING began sponsoring the Renault Formula One team in Template:F1, and also has a large amount of trackside advertising and race sponsorship deals.

In recent years, ING has been the title sponsor of the New York City Marathon and the San Francisco famous Bay to Breakers. This sponsorship deal will continue until 2010.

Investigations into investment and business practices

Over the past several years, the ING Group has come under scrutiny over the ethics of some of their business practices. In October 2005, the National Association of Securities Dealers (NASD), the leading private-sector provider of financial regulatory services in the United States, ordered ING Funds Distributor (IFD) to pay fines of $1.5 million for permitting improper market timing in ING funds and related violations, $1.4 million in restitution to affected mutual funds, and a $25,000 fine and 30-day supervisory suspension on an IFD supervisor.[9]