Hyderābād and Berar under the Nizams, was the largest princely state in the British Raj. The Berar region of present day Vidarbha in Maharashtra was merged with the Central Provinces in 1903 to form Central Provinces and Berar. Hyderabad state was located in the south-central Indian subcontinent from 1724 until 1948, ruled by a hereditary Nizam who was Muslim. Islam was strongly represented in the principality although the majority of the population were Hindu. During the partition of India in 1947, the Nizam of Hyderabad declared his intentions of not joining either newly formed India or Pakistan. India then launched Operation Polo, which resulted in the absorption of Hyderabad into the Indian Union. The Nizam was among the richest men in the world. He was the highest ranking among the Indian princes and one of five entitled to a 21-gun salute. As the Moghuls declined in power and influence, that of the Nizam's grew.

Unlike the Moghul Emperor, the Nizam did not support the First War of Indian Independence in 1857 and subsequently the Nizams enjoyed the favor of the British, who called them our "faithful ally".[1] Politically astute leadership resulted in a stable state, where Muslim culture and learning flourished. Due to the many educational and cultural institutions established by the Nizams, Hyderabad has found itself well placed to take a lead in India's technological development. It has been called an Indian equivalent of California's "silicon valley."[2] Generally, the Nizam’s legacy has ensured the region's continued prosperity.

Hyderabad was founded by the Qutb Shahi dynasty of Golconda. In 1686 the Mughal emperor Aurangzeb campaigned in the Deccan to overcome the Hindu Marathas and conquer the independent Deccan states. Before the campaign, the Mughals had controlled the northwestern Deccan, including Khandesh and Berar, but Mughal control ended at the Godavari River. Aurangzeb conquered Golconda and Bijapur in 1687, extending Mughal control south of the Krishna River.

The Mughal Empire began to weaken during the reign of Aurangzeb's grandson, Muhammad Shah. A Mughal official, Asif Jah, treacherously defeated a rival Mughal governor to seize control of the empire's southern provinces, declaring himself Nizam-al-Mulk of Hyderabad in 1724.[3] The Mughal emperor, under renewed attack from the Marathas, was unable to prevent it.

The Nizams patronized Islamic art, culture and literature and had a railway system called The Nizam's Government State Railways. Sharia-The Islamic Religious Law Code, was the guiding principle of the Nizams' official machinery.

During the British Raj

The seniormost (21-gun) princely state in British India, Hyderabad was an 82,000 square mile (212,000 km²) region (larger than England and Scotland combined) in the Deccan ruled by the Asif Jahi dynasty, who had the title of Nizam and was bestowed the title of His Exalted Highness by the British Empire. The Nizam set up many institutions in the name of the dynasty. He set up schools, colleges, madrasas (Islamic Seminaries) and a University that imparted education in Urdu. Inspired by the elite and prestigious ICS (Indian Civil Service), he started HCS (Hyderabad Civil Service). The pace with which he amassed wealth made him to be among the world's richest men in the 1930s. Carrying a gift, called Nazrana in the local dialect, in accordance with one's net worth while meeting Nizam was a de facto necessity. When the last Ottoman caliph, Abdul Mejid II was deposed by Turkey in 1924, it was the Nizam who went to the rescue of former caliph, who had no means to support himself, by providing an annual allowance. In 1931, the son of the last Nizam married Abdul Mejid II's daughter. Relations between the different faiths in Hyderabad was generally cordial. By allying himself with the British, the Nizam ensured stability and peace for his state. The 7th Nizam, whose own life style was almost ascetic, patronized Hindu as well as Muslim institutions. He gave an annual gift to the Golden temple in Amritsar.[4] Early alliance with the British secured stability for the State, which did not join the anti-British rebellion in 1857.

When India gained independence in 1947, the British, left the choice of independence or unification up to the local rulers of the princely states. The Muslim ruler of Hyderbad, the last Nizam, wished to remain independent. First he tried to declare Hyderabad as a part of Pakistan (he had strongly advocated the creation of Pakistan) but the British government did not allow this. Later in the same year, he announced his intention to become independent. This precipitated Operation Polo, named for Hyderabad's 17 Polo fields. The Indian army invaded on September 13. Five days later, faced with little resistance from the much smaller Hyderabad force, the state was part of India. Osman Ali Khan remained Nizam until he died. His grandson, Jah Asaf Jah was titular Nizam until India abolished princely titles in 1972.

In 1956 during the Reorganization of the Indian States, the state of Hyderabad was split up between Andhra Pradesh, Maharashtra and Karnataka. The last Nizam, Mir Osman Ali Khan, died in 1967. 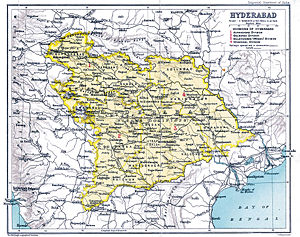 Urdu (in particular, the unique Dakhani dialect), Telugu, Marathi and Kannada are the important languages spoken in Hyderabad and Andhra Pradesh today. Biryani, a spicy dish made of rice and meat, is among the remnants of the Nizami cuisine.

The political party MIM (Majlis-Ittehadul-Muslimeen), with Qasim Rizvi as one of the founders, is prominent. The Owaisi family presently leads MIM. Their presence has dwindled significantly of late and is now mainly restricted to the Old City areas of Hyderabad.

Hyderabad has a substantial Shi'a population and its many Sufi shrines continue to attract visitors and pilgrims, non-Muslim as well as Muslim.

The last Nizam was a philanthropist who also contributed financially to Great Britain's war effort. After his death, his heirs squabbled over the fortune, which included a priceless jewelry collection. This was eventually purchased by the Indian government at a fraction of its value.

Hyderabad continues to be an important center of Muslim culture and scholarship. The City's Muslim population is about 40 percent. Barkat Ali Khan Mukarram Jah Asaf Jah VIII born October 6, 1933, is the "titular" Nizam. His story is told in John Zubrzycki's, The last Nizam: an Indian prince in the Australian outback (2006). After spending time in a remote part of Australia he moved to Istanbul, Turkey. None of the family's fortune survived. Hyderabad is also a leading center of technology, building on its excellent educational facilities.