Hulagu Khan, also known as Hulagu, Hülegü or Hulegu (Mongolian: Хүлэгү, Khülegü; Chagatai/Persian: ہلاکو - Hulaku; Arabic:هولاكو; c. 1217 – February 8, 1265), was a Mongol ruler who conquered much of Southwest Asia. Son of Tolui and the Kerait princess Sorghaghtani Beki, he was a grandson of Genghis Khan, and the brother of Arik Boke, Mongke and Kublai Khan. Hulagu's army greatly expanded the southwestern portion of the Mongol Empire, founding the Ilkhanate of Persia, a precursor to the Safavid Dynasty and later to the modern state of Iran. Under Hulagu's leadership, the Mongols destroyed the greatest center of Islamic power, Baghdad, and also weakened Damascus, causing a shift of Islamic influence to the Mamluks in Cairo.

Hulagu's dynasty unified much of Iran following several-hundred years of political fragmentation. It also oversaw what has been described as an Iranian Renaissance. Oscillatting between Sunni and Shi'a Islam, the latter would become the state religion after the beginning of the Safavid dynasty. Although the Khanate disintegrated, it brought stability to the region for about a century (1256 to 1353}. It was in Hulagu's reign that Iranian historians switched from writing in Arabic to writing in Persian. Reviving pride in the cultural legacy of Iran, this may have contributed to the way in which Iranian Islam distinguished itself from the Islam of the Arab world and later from that of the Ottoman Empire. In 1264, after spending three years in Hulagu's realm, Marco Polo and his uncle set off along the Silk Road to the Court of the Great Khan. Hulagu therefore contributed to bridge-building between the European and Eastern spaces.

Hulagu was born to Tolui, one of Genghis Khan's sons, and Sorghaghtani Beki, an influential Kerait princess. Sorghaghtani successfully navigated Mongol politics, arranging for all of her sons to become Mongol leaders. Hulagu was friendly to Christianity, as his mother was a Nestorian Christian. Hulagu's favorite wife, Dokuz Khatun, was also a Christian, as was Hulagu's closest friend and general, Kitbuqa. Hulagu told the Armenian historian Vardan Arewelc'i in 1264 that he had been a Christian since birth. It is recorded however that he resorted to Buddhism as he neared his death, against the will of his Christian wife Dokuz Khatun (Jackson 2005, 176).

Hulagu marched out with perhaps the largest Mongol army ever assembled—by order of Mongke, two in ten fighting men in the entire empire were gathered for Hulagu's army. He easily destroyed the Lurs, and his reputation so frightened the Assassins (also known as the Hashshashin) that they surrendered their impregnable fortress of Alamut to him without a fight. 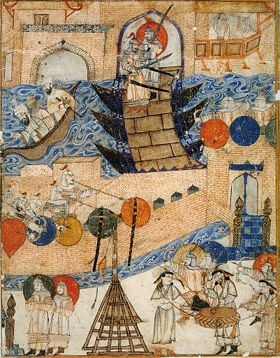 The Mongol army, led by Hulagu Khan and his top general Guo Kan, set out for Baghdad in November of 1257. Hulagu demanded surrender; the caliph refused, warning the Mongols that they faced the wrath of God if they attacked the caliph. Hulagu's forces then besieged the city, which surrendered on February 10, 1258, leading to a week-long massacre by the Mongols, regarded as one of the most devastating events in the history of Islam. A surviving member of the Abbasid dynasty, Al-Mustansir fled to Egypt where the Mamluk sultan gave him refuge, where his heirs continued to claim the title caliph until the Ottoman conquest of 1517, although they did not exercise any political power.

After Baghdad, in 1260, Mongol forces combined with those of their Christian vassals in the region, such as the army of Cilician Armenia under Hetoum I, and the Franks of Bohemond VI of Antioch. This force then conquered Muslim Syria, domain of the Ayyubid dynasty. They took together the city of Aleppo, and on March 1, 1260, under the Christian general Kitbuqa, they also took Damascus.[1](Grousset 1981, 581). "On 1 March Kitbuqa entered Damascus at the head of a Mongol army. With him were the King of Armenia and the Prince of Antioch. The citizens of the ancient capital of the Caliphate saw for the first time for six centuries three Christian potentates ride in triumph through their streets," (Runciman 1999, 307). A Christian Mass was celebrated in the Grand Mosque of the Umayyads (the former cathedral of Saint John the Baptist), (Richard 1996, 423) and numerous mosques were profaned. Many historical accounts describe the three Christian rulers (Hetoum, Bohemond, and Kitbuqa) entering the city of Damascus together in triumph, (Grousset 1981, 588) though some modern historians such as David Morgan have questioned this story as apocryphal (Morgan 1986, 135). The invasion effectively destroyed the Ayyubid Dynasty, theretofore powerful ruler of large parts of the Levant, Egypt, and Arabia. The last Ayyubid king An-Nasir Yusuf was killed by Hulagu in 1260 (Riley-Smith, Balard, and Cantoni 1996, 108). With the Islamic power center of Baghdad gone and Damascus weakened, the center of Islamic power transferred to the Egyptian Mamluks in Cairo.

Hulagu's intent at that point was to continue south through Palestine towards Cairo to engage the Mamluks. However, Great Khan Mongke had died in late 1259, requiring Hulagu to return Karakorum to engage in the decision on who the next Great Khan would be. Hulagu departed with the bulk of his forces, leaving only about 10,000 Mongol horsemen in Syria under Kitbuqa to occupy the conquered territory (Runciman 1999, 310). Kitbuqa's forces engaged in raids southward towards Egypt, reaching as far as Ascalon and Jerusalem, and a Mongol garrison of about 1,000 was placed in Gaza, (Richard 1996, 428) (Maalouf 1985, 264) (Tyerman 2006, 806) with another garrison located in Naplouse (Maalouf 1985, 262).

The Mamluks took advantage of the weakened state of Kitbuqa's forces. The Crusaders, though traditional enemies of the Mamluks, also regarded the Mongols as the greater threat. Discussions took place between the Muslims and the Christians, with debate about whether or not to join forces against the Mongols, but the Muslims were not in agreement with this action. So instead, the Crusaders allowed the Egyptian forces to come north through Crusader territory, and resupply near the Crusaders' powerbase of Acre (Morgan 1986, 137). The Mamluks then engaged the remnants of the Mongol army in Galilee, at the Battle of Ayn Jalut. The Mamluks achieved a decisive victory, Kitbuqa was executed, and the location established a high-water mark for the Mongol conquest. In previous defeats, the Mongols had always returned later to re-take the territory, but they were never able to avenge the loss at Ayn Jalut. For the rest of the century, the Mongols would attempt other invasions of Syria, but never be able to hold territory for more than a few months. The border of the Mongol Ilkhanate remained at the Tigris River for the duration of Hulagu's dynasty.

Hulagu returned to his lands by 1262, after the succession was finally settled with his brother Kublai Khan established as Great Khan. But when Hulagu massed his armies to attack the Mamluks and avenge the defeat at Ain Jalut, he was instead drawn into civil war with Batu Khan's brother Berke. Berke Khan, a Muslim convert, had promised retribution in his rage after Hulagu's sack of Baghdad, and allied himself with the Mamluks. He initiated a series of raids on Hulagu's territories, led by Nogai Khan. Hulagu suffered a severe defeat in an attempted invasion north of the Caucasus in 1263. This was the first open war between Mongols, and signaled the end of the unified empire.

Hulagu sent multiple communications to Europe, in an attempt to establish a Franco-Mongol alliance against the Muslims. In 1262, he sent an embassy to "all kings and princes overseas," along with his secretary Rychaldus. However, the embassy was apparently intercepted in Sicily by King Manfred, who was allied with the Mamluks and in conflict with Pope Urban IV, and Rychaldus was returned by ship (Jackson 2005, 173).

On April 10, 1262, Hulagu sent through John the Hungarian a letter to the French king Louis IX, offering an alliance (Jackson 2005, 178). It is unclear whether the letter ever reached Louis IX in Paris, as the only known manuscript survived in Vienna, Austria (Jackson 2005, 166). However, the letter stated Hulagu's intention to capture Jerusalem for the benefit of the Pope, and asked for Louis to send a fleet against Egypt:

"From the head of the Mongol army, avid to devastate the perfid nation of the Sarasins, goodwilling support of the Christian faith (...) so that you, who are the rulers of the coasts on the other side of the sea, endeavour to deny a refuge for the Infidels, your enemies and ours, by having your subjects diligently patrol the seas."|Letter from Hulagu to Saint Louis.[2]

Despite many attempts, neither Hulagu nor his successors were ever able to form an alliance with Europe. However, the thirteenth century did see a vogue of Mongol things in the West. Many new-born children in Italy were named after Mongol rulers, including Hulagu: names such as Can Grande ("Great Khan"), Alaone (Hulagu), Argone (Arghun) or Cassano (Ghazan) are recorded (Jackson 2005, 315). 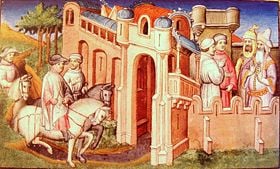 Nicolò and Maffeo in Bukhara, where they stayed for three years. They were invited by a envoy of Hulagu (right) to travel east to visit the Great Khan Kubilai.

Niccolò and Maffeo Polo reportedly traveled to the realm of Hulagu and stayed in the city of Bukhara, in modern day Uzbekistan, where the family lived and traded for three years from 1261 to 1264. Nicolò and Maffeo then joined up with an embassy sent by Hulagu to his brother, the Great Khan Kublai. In 1266, the Polos reached the seat of the Great Khan in the Mongol capital Khanbaliq, present day Beijing, China. They reportedly remained there many years, until in 1291 sent on a mission by Kublai to escort a 17-year-old princess bride, Kököchin, to Arghun Khan, Hulagu's grandson.

Hulagu Khan died in 1265 and was buried in the Kaboudi Island in Lake Urmia. His funeral was the only Ilkhanid funeral to feature human sacrifice (Morgan 1986, 139). He was succeeded by his son Abaqa, thus establishing his line.

Hulagu Khan laid the foundations of the Ilkhanate State, and by doing so paved the way for the later Safavid dynastic state, and ultimately the modern country of Iran. Hulagu's conquests also opened Iran to both Europe influence from the west and Chinese influence from the east. This, combined with patronage from his successors, would develop Iran's distinctive excellence in architecture. The Polos set out along the Silk Road during his rule; their journey substantially contributed to East-West cultural exchange.

The dynasty unified much of Iran following several-hundred years of political fragmentation. Adopting Islam, they oversaw what has been described as a Renaissance in Iran. Oscillatting between Sunni and Shi'a Islam the latter would become the state religion after the beginning of the Safavid dynasty. Although the Khanate disintegrated, it brought stability to the region for about a century. Their rule is usually dated from 1256 to 1353. Under Hulagu's dynasty, Iranian historians also moved from writing in Arabic, to writing in Persian (Robinson 2007, 19, 36). This revival of pride in Iran's ancient cultural legacy may have contributed to the later development of Twelver Shi'a Islam as a distinctive Iranian expression of Islam, in contrast to the Sunni Islam that dominated the Arab and Ottoman spaces.

Retrieved from https://www.newworldencyclopedia.org/p/index.php?title=Hulagu_Khan&oldid=1008983
Categories:
Hidden category:
This page was last edited on 19 January 2018, at 19:29.
Content is available under Creative Commons Attribution/Share-Alike License; additional terms may apply. See Terms of Use for details.