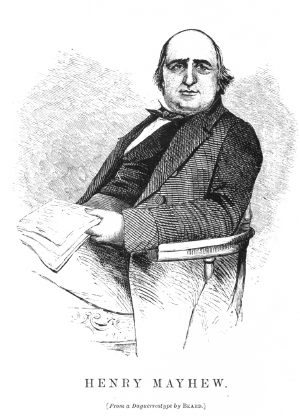 Henry Mayhew, from London Labour and the London Poor (1861)

Henry Mayhew (November 25, 1812 – July 25, 1887) was an English social researcher, journalist, playwright, and reformer. He was one of the two founders of the satirical and humorous magazine Punch, and the magazine's joint-editor, with Mark Lemon, in its early days. He is better known, however, for his social research, publishing an extensive series of newspaper articles in the Morning Chronicle, later compiled into the book series London Labour and the London Poor, a groundbreaking and influential survey of the poor of London. As well as influencing literary authors, such as Charles Dickens, Mayhew's research pioneered criminological efforts at understanding the relationship between crime and other variables by the use of maps. He thus contributed not only a striking commentary and documentation of social conditions, but also ideas and techniques for understanding the relationship between these conditions and crime.

Henry Mayhew was born in London on November 25, 1812, one of seventeen children of Joshua Mayhew. He was educated at Westminster school before running away from his studies to sea, at the age of 12. He then served with the East India Company as a midshipman on a ship bound for Calcutta, India.

In 1829, he returned to Britain, where he became a trainee lawyer in Wales, working with his father for the next three years. After a while, he decided to enter the career of journalism and became a freelance journalist. He contributed to the The Thief, a readers digest, followed quickly by writing the play Figaro in London, in 1829. Along with continuing to develop his writing, Mayhew briefly managed the Queen's Theatre.

In 1835, unable to support himself by writing, Mayhew found himself seriously indebted, and along with a fellow writer, escaped to Paris to avoid creditors. He spent his time writing, gathering around himself a circle of friends, including William Thackeray and Douglas Jerrold. 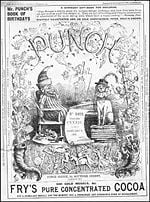 Punch magazine was co-founded by Mayhew in 1841.

On July 17, 1841, Mayhew co-founded Punch magazine. At its founding, the magazine was jointly edited by Mayhew and Mark Lemon. Initially it was subtitled The London Charivari, a reference to a satirical humor magazine published in France under the title Le Charivari (a work read often while Mayhew was in Paris). Reflecting their satiric and humorous intent, the two editors took for their name and masthead the anarchic glove puppet, Mr. Punch. Punch was an unexpected success, popular with readers from all classes of society.

In 1842, Mayhew contributed to the pioneering Illustrated London News. By this time Mayhew had become reasonably secure financially, had settled his debts and married Jane Jerrold, the daughter of his friend Douglas Jerrold.

Mayhew then resigned as joint editor of Punch magazine, continuing only as an adviser. He completely severed his connection with the magazine by 1845. His brother Horace stayed on the board of Punch until his death. The Punch years gave Mayhew the opportunity to meet talented illustrators whom he later employed to work on his London Labour and the London Poor.

After his experience with Punch, Mayhew became involved in several literary adventures, mostly the writing of plays. Two of his plays, But, However and the Wandering Minstrel, were successful whilst the others received minimal attention. In 1849, he received a journalistic assignment that would change his career. The project was sponsored by the Morning Chronicle newspaper, and it involved a large-scale survey of Britain's working poor.

Mayhew wrote a series of articles on the life conditions in London’s slums. His writing style was uncompromising and often shocking, causing frequent censorship by the editors. By 1850 Mayhem quit the project, and continued to publish his stories on the subject independently until 1852. These articles were compiled into London Labour and the London Poor.

London Labour and the London Poor

The articles comprising London Labour and the London Poor were initially collected into three volumes in 1851; the 1861 edition included a fourth volume, co-written with Bracebridge Hemyng, John Binny, and Andrew Halliday, on the lives of prostitutes, thieves, and beggars. This Extra Volume took a more general and statistical approach to its subject matter than Volumes 1 to 3.

Mayhew’s approach was ethnographic, involving observation and interview. He interviewed everyone—beggars, street-entertainers, market traders, prostitutes, laborers, sweatshop workers, even down to the "mudlarks" who searched the stinking mud on the banks of the River Thames for wood, metal, rope, and coal from passing ships, and the "pure-finders" who gathered dog feces to sell to tanners. He described their clothes, how and where they lived, their entertainment and customs, and made detailed estimates of the numbers and incomes of those practicing each trade.

Mayhew also included biographical sketches of people he met, including those of flower girls, cat and dog meat dealers, and pickpockets. The stories were often heartbreaking, describing the struggle to survive in Victorian London. The books makes fascinating reading, showing how marginal and precarious many people's lives were, in what at the time may have been the richest city in the world.

In the fourth volume of the book, Mayhew described characteristics and activities of criminals in Britain. He drew detailed maps to illustrate the criminal statistics of each county. Mayhew’s maps were among the earliest attempts to study crime through geographical methods. This volume also included various statistics—the number of illegitimate children per county, rates of teenage marriage, the number of crimes committed by women, and so forth.

After 1852, Mayhem’s life seems to have declined rapidly. He lived in Germany for brief periods, writing three travel books (1856, 1858, 1864) and a biography of the young Martin Luther (1864). All four of those works received minimal attention. He also attempted, unsuccessfully, to write children’s books. He and his wife separated, and in 1865, Mayhem completely disappeared from public view. His wife died in 1880.

Mayhew's work was embraced by and was an influence on Christian Socialists, such as Thomas Hughes, Charles Kingsley, and F. D. Maurice. Radicals also published sizable excerpts from the reports in the Northern Star, the Red Republican, and other newspapers. The often sympathetic investigations, with their immediacy and unswerving eye for detail, offered unprecedented insights into the condition of the Victorian poor. Alongside the earlier work of Edwin Chadwick, they are also regarded as a decisive influence on the thinking of Charles Dickens.

Mayhew’s maps of criminal activities were among early attempts to connect crime with geographical areas. His work helped clarify the relationship between crime and other variables, such as urbanization, poverty, and disease. Modern day criminologists have adopted this method of using maps to explore the spatial relationship between criminal activity and other ecological variables.

Retrieved from https://www.newworldencyclopedia.org/p/index.php?title=Henry_Mayhew&oldid=1008321
Categories:
Hidden category:
This page was last edited on 18 December 2017, at 16:55.
Content is available under Creative Commons Attribution/Share-Alike License; additional terms may apply. See Terms of Use for details.