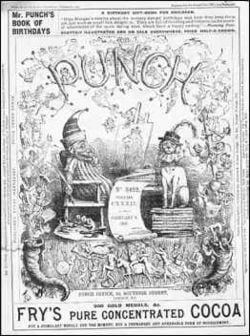 Punch was a British weekly magazine of humor and satire published from 1841 to 1992 and from 1996 to 2002. At the pinnacle of its popularity, Punch was seen as the exemplar in its field. It featured a number of famous British artists, particularly cartoonists and writers. It was resurrected in 1996 by Mohammed Al Fayed, who believed it to be a British institution, although it ceased publication again in 2002. Although Punch was always intended to be humorous, its influence on British society was indeed significant. Providing incisive commentary on social and political affairs, the magazine presented the best and worst of British society to itself and to the world. Using the vehicle of humor allowed potentially unpopular ideas to be presented, a valuable aspect of a society in which freedom of speech is valued, and thus was a valuable component of the system of checks and balances that allows human society to maintain and develop in a healthy fashion. 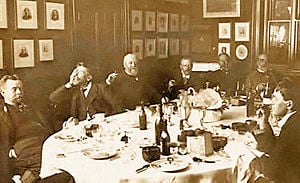 Editorial meeting of Punch magazine in the late nineteenth century.

Punch was founded on July 17, 1841, by Henry Mayhew and engraver Ebenezer Landells. "Punch" is thought to be a truncation of Punchinello, from the Neapolitan dialectal polecenella meaning a young turkey cock, the hooked bill of which resembles the hooked nose of Punch's mask in the Commedia del Arte.[1]

At its founding, Punch was jointly edited by Mayhew and Mark Lemon. Initially it was subtitled The London Charivari, this being a reference to a satirical humor magazine published in France under the title Le Charivari. Reflecting their satiric and humorous intent, the two editors took for their name and masthead the anarchic glove puppet, Mr. Punch. The name also referred to a joke made early on about one of the magazine's first editors, Lemon, that "punch is nothing without lemon." A drawing by Richard Doyle featuring Punch and his dog Toby was used as the magazine's cover from its inception until 1956, when new designs in color were used for each issue. Punch and Toby were traditionally still used somewhere on the cover though.[2]

Punch was responsible for the modern use of the word cartoon to refer to a comic drawing. The Houses of Parliament were being rebuilt after a fire, and artists were encouraged to submit preliminary drawings, or "cartoons," to help select new paintings and murals. A series of drawings in Punch given the title "cartoons" (including John Leech's "Cartoon, No.1: Substance and Shadow") used sarcasm to attack the government's expenditure of money on needless opulence while the poor went hungry. The term "cartoon" stuck as a description of pictorial satire.[3]

Mayhew ceased to be joint editor in 1842 and became "suggester in chief" until he severed his connection in 1845. During its history, Punch featured a number of notable artists and writers in its pages. These include the cartoonists John Tenniel and George du Maurier, and the writers William Makepeace Thackeray, Sylvia Plath, W. Somerset Maugham, Kingsley Amis, A. A. Milne, and P.G. Wodehouse.

Circulation peaked during the 1940s when it reached 175,000, but slowly declined over the years, until the magazine was forced to close in 1992 after 150 years of publication. During its existence, Punch was considered to be the king of humor magazines and was not seriously challenged in the genre. It reached such a level of fame for its audacious satire and employing some of the brightest stars in art and literature.

In early 1996, the Egyptian businessman Mohamed Fayed bought the rights to the name, and it was re-launched later that year. It was reported that the magazine was intended to be a spoiler aimed at Private Eye, another British satirical magazine, which had published many items critical of Fayed and showing him in a bad light.[4] Fayed, on the other hand, claimed his purchase of the magazine was because it was a British institution.

The magazine never became profitable in its new incarnation, and at the end of May 2002, it was announced that Punch would once more cease publication. Press reports at the time quoted a total loss to its owner of some £16 million (about $28 million U.S.) over the six years of publication, with only 6,000 subscribers at the end.[5] The magazine's archive and other memorabilia associated with the magazine was acquired by the British Library in March 2004. Of the sale, Fayed said, "It is vital that it should be preserved for the nation so that future generations may have the benefit of this historic collection of the best of British humorous writing and art which chronicled British society over many generations."[6]

Despite the seemingly trivial role of a humor magazine in society, Punch can be said to have played a significant role in the development of satire in the modern Western world. Punch continued the tradition of European satire seen in much of Europe's history from the French Revolution through the World Wars.[7] Satire is an effective and often ingenious method of propagating unpalatable ideas in the more easily accepted form of humor. The establishment of a long-running satire magazine such as Punch provided a stable outlet for writers and artists working in the genre and provided a central source of such content for consumers. The existence of a constant home to possibly unpopular ideas expressed in a funny fashion supports the extremely important freedom of speech that is prized in today's modern democracies.

Punch also had a number of direct effects on culture. Punch has given several phrases to the English language, including the "Curate's egg" and "The Crystal Palace" as well as the use of the term cartoon to refer to satirical drawings. Several British humor classics were first serialized in Punch, such as the Diary of a Nobody and 1066 and All That. Cartoons from Punch magazine have been commonly used in high school History examinations to illustrate British attitudes to foreign and domestic issues. Punch is the brand of a coffee sold in Fortnum & Mason of Piccadilly, London, and until September 2006 Harrods had a Punch themed cafe.[8]