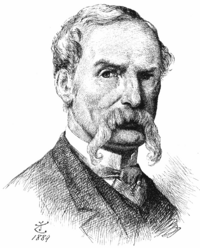 Sir John Tenniel (February 28, 1820 – February 25, 1914) was an English illustrator and cartoonist. He drew many topical, humorous and political cartoons and caricatures for Punch in the late nineteenth century, including the iconic Dropping the Pilot. His work added a new level of dignity and polish to the genre.

Tenniel is best remembered today for his illustrations in Lewis Carroll's Alice in Wonderland and Through the Looking-Glass. These illustrations added a wonderful and subtle imagery that enhanced the text, bringing to life the surreal storytelling, wordplay, and pure humor in Carroll's imaginative works. His art thus contributed to the entertainment and education of children and adults throughout the world, bringing great joy and happiness, in ways that have remained deeply embedded in modern culture.

John Tenniel was born on February 28, 1820, in London and educated himself for a career in art, although he became a probationer and, later, a student of the Royal Academy. The symmetry and preciseness of his drawings could be attributed to years of coursework in statuary and human anatomy.[1]

Although he had a tendency towards fine art, Tenniel was known and appreciated as a humorist, and his early companionship with Charles Keene fostered and developed his talent for scholarly caricature. Tenniel was blinded in one eye while fencing with his father in 1840. He had a photographic memory and did not use models or photographs to aid him in illustrating:

I carry out my work thus: I never use models or nature for the figure, drapery or anything else. But I have a wonderful memory of observation - not for dates, but anything I see I remember. Well, I get my subject on Wednesday night; I think it out carefully on Thursday, and make my rough sketch; on Friday morning I begin, and stick to it all day, with my nose well down on the block. By means of tracing-paper I transfer my design to the wood and draw on that.[2]

In 1836 Tenniel sent his first picture to the exhibition of the Society of British Artists, and in 1845 he contributed a 16-foot cartoon, An Allegory of Justice, to a competition for designs for the mural decoration of the new Palace of Westminster. For this he received a £200 premium and a commission to paint a fresco in the Upper Waiting Hall (or Hall of Poets) in the House of Lords.

Tenniel had some cartoons accepted by Punch Magazine and when Richard Doyle left, Mark Lemon, the editor of the magazine, decided to replace Doyle with Tenniel. In December of 1850, Tenniel became a staff cartoonist with Punch.

Because of Tenniel's support for the Conservative Party and the Marquis of Salisbury, the Prime Minister decided to grant him knighthood. Although the Liberal Party assumed power before Tenniel's knighthood could be announced, William Ewart Gladstone, the new Prime Minister, authorized the honor.[2] 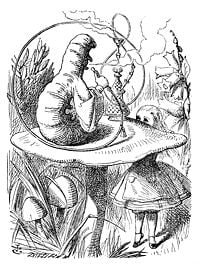 Caterpillar using a hookah. An illustration from Alice in Wonderland. 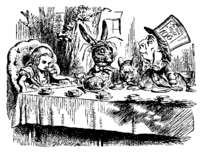 This famous image from Alice in Wonderland depicts Alice, the March Hare, the Mad Hatter, and the Dormouse at a tea party.

At Christmas 1850, Mark Lemon invited Tenniel to fill the position of joint cartoonist (with John Leech) on Punch. He had been selected on the strength of his illustrations to Aesop's Fables. He contributed his first drawing in the initial letter appearing on p. 224, vol. xix. His first cartoon was Lord Jack the Giant Killer: It showed Lord John Russell assailing Cardinal Wiseman. Although unsure over whether he could produce sufficiently humorous material as a cartoonist for Punch, he was extremely successful. His work on political cartoons added a polished satire to the form, bringing it into the level of classic composition.

In 1865 Tenniel illustrated the first edition of Lewis Carroll's Alice in Wonderland. The first print run of 2,000 was shelved because Tenniel had objections over the print quality. A new edition, released in December of the same year but carrying an 1866 date, was quickly printed and became an instant best-seller, securing Tenniel's immortality in the process. Tenniel's illustrations for both Alice in Wonderland and Through the Looking-Glass have taken their place among the most famous literary illustrations ever made. They were used as a model for the costumes in Paramount Pictures' Alice in Wonderland. 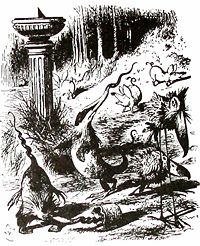 This illustration from Through the Looking Glass accompanied the poem "Jabberwocky".

In his career, Tenniel contributed around 2,300 cartoons, innumerable minor drawings, double-page cartoons for Punch's Almanac and other special numbers, and 250 designs for Punch's Pocket-books. After he retired in January 1901, he was honored with a farewell banquet (June 12), at which AJ Balfour, then leader of the House of Commons, presided.

Beyond his cartoons, Tenniel's illustrations of numerous books also won him international fame and a place in history. His most significant contributions are the acclaimed illustrations to Lewis Carroll's books, Alice in Wonderland and Through the Looking-Glass.

Public exhibitions of Tenniel's work were held in 1895 and 1900. Sir John Tenniel is also the author of one of the mosaics, Leonardo da Vinci, in the South Court in the Victoria and Albert Museum. His highly stippled water-color drawings appeared from time to time in the exhibitions of the Royal Institute of Painters in Water Colours, of which he had been elected a member in 1874. 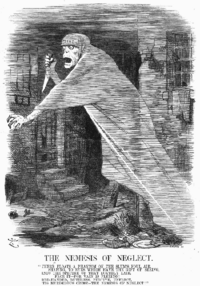 "The Nemesis of Neglect," 1888 Punch cartoon commenting on the Jack the Ripper murders.

He also contributed to Once a Week, the Art Union publications, etc.

Retrieved from https://www.newworldencyclopedia.org/p/index.php?title=John_Tenniel&oldid=1075245
Categories:
Hidden category:
This page was last edited on 3 August 2022, at 07:57.
Content is available under Creative Commons Attribution/Share-Alike License; additional terms may apply. See Terms of Use for details.