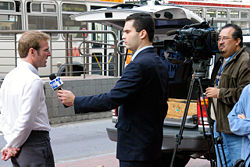 In all cases, interviews involve a social interaction between two or more people, and communication of ideas, emotions, thoughts, and so forth between them. When the individuals involved maintain a harmonious relationship, with trust and honesty on both sides, and a desire to understand and appreciate the point of view and knowledge of the other, an interview is a very effective communication device. Unfortunately, self-centered people have abused this situation for their own gain, at the expense of the other party.

An interview is a meeting in which one person learns information from another. The word comes from the French entrevue, meaning "to see each other, visit each other briefly, [or] have a glimpse of."[1]

Interviews are used to achieve a number of different ends including job placement, academic research, and crime solving.

The most common type of interview for assessment is a job interview between an employer and an applicant. The goal of such an interview is to assess a potential employee to see if he/she has the social skills and intelligence suitable for the workplace. Similar interviews are also used for admissions to schools, allotment of grants, and other areas.

In most developed countries, rules and regulations govern what can be asked in these interviews. Highly personal questions and those unrelated to the job at hand are forbidden, as are questions which invite discrimination. However some interviewers tend to ask such questions in order to see how the interviewee reacts and if (s)he is able to elegantly avert the question.

Multiple rounds of job interviews may be used where there are many candidates or the job is particularly challenging or desirable; earlier rounds may involve fewer staff from the employers and will typically be much shorter and less in-depth. A common initial interview form is the phone interview, a job interview conducted over the telephone. This is especially common when the candidates do not live near the employer and has the advantage of keeping costs low for both sides.

A common type of job interview in the modern workplace is the behavioral interview or behavioral event interview. In this sort of interview, the interviewers tend to ask questions about general situations, with the candidate asked to describe how they did or would handle a specific problem. A bad hiring decision can be immensely expensive—cost of the hire, training costs, severance pay, loss of productivity, impact on morale, cost of re-hiring, and so forth. Structured selection techniques have a better track record of identifying the soundest candidate than the old-style "biographical" interview. Typical behavioral interview questions include:

The goal of the interview is to assess the candidate's ability to respond to the sorts of situations that the job may present them with. The questions asked will therefore be based on the job description, the performance indicators, the skills/personal qualities required and the interviewer's knowledge of operating in the role. Questioning will either be hypothetical ("how would you deal with situation X?") or based on historical examples from the interviewee's current or previous experience ("when situation X arose, how did you deal with it?"). Either way, the interviewer is interested the thought process used and the values of the candidate and the outcome of the situation.

One type of stress interview is where the employer uses a succession of interviewers (one at a time or en masse) whose mission is to intimidate the candidate and keep him/her off-balance. The ostensible purpose of this interview: To find out how the candidate handles stress. Stress interviews might involve testing applicant's behavior in a busy environment. Questions about handling work overload, dealing with multiple projects, and handling conflict are typical.

Another type of stress interview may involve only a single interviewer who behaves in an uninterested or hostile style. For example, the interviewer may not give eye contact, may roll their eyes or sigh at the candidate's answers, interrupt, turn his back, take phone calls during the interview, and ask questions in a demeaning or challenging style. The goal is to assess how the interviewee handles pressure or to purposely evoke emotional responses. This technique was also used in research protocols studying Stress and Type A (coronary-prone) Behavior because it would evoke hostility and even changes in blood pressure and heart-rate in study subjects. The key to success for the candidate is to de-personalize the process. The interviewer is acting a role, deliberately and calculatedly trying to "rattle the cage." Once the candidate realizes that there is nothing personal behind the interviewer's approach, it is easier to calmly handle the questions.

Such interviews occur only because the subjects have some interest in being interviewed. There are four main reasons why subjects agree to be interviewed:

Even after an interview has been granted the subject normally imposes conditions. Almost all interviews have a time limit. The greater the fame and importance of a subject, the more limitations they demand. These includes subject matters that are off limits, a veto over the final piece, or even a full list of questions provided in advance. Some politicians, notably Helmut Kohl (Germany), avoided giving interviews to the press, whereas many others consider this a necessary aspect of political campaigning.

There are several other rules to interviews. If a subject declares that what they say is "off the record" a reporter is not supposed to use such information. If material is "Background," the material can be used but its source cannot be mentioned, if it is "deep background" then the information cannot be used on its own, and can only confirm information already obtained from another source. A subject may also declare that their comments should have no "attribution." In such cases the name of the subject cannot be mentioned, but they should simply be referred to as "a source in …."

These rules are unwritten and in the past reporters have broken them. However, if a journalist published material that was off the record they are unlikely to be able to use that source again. Moreover, news of such betrayals spreads and a reporter may have trouble with other sources.

The tone of an interviewer is also important. Tough interviewers that are honest and forthrightly pose important and difficult questions are appealing to audiences, but not to subjects. An interviewer that develops a reputation for such aggressiveness may soon find it difficult to convince subjects to sit for an interview. A subject that is offended during an interview may put an early halt to the discussion. Politicians, celebrities, and experts on certain subjects are frequently interviewed. Sometimes interviews are ended early (usually by the interviewee); one famous example is the interview of Charlton Heston by Michael Moore in the film Bowling for Columbine. Well known investigative journalists can often get interviews only under false pretenses. Conversely, an interviewer that asks only "soft" questions will lose the respect of audiences and colleagues.

Interviews with journalists/researchers are not necessarily antagonistic. Information interviews give the public glimpses into the lives of celebrities or other such people of note to whom they would not normally have access. Some examples of interviewers gaining access to difficult people include Dan Rather interviewing Saddam Hussein and Martin Bashir's interview of Michael Jackson. Bashir came to wide prominence in 1995, when he interviewed (for the BBC's Panorama) Diana, Princess of Wales about her failed marriage to the Prince of Wales.

The ideal interview is considered to be a face to face one. Most newspapers order reporters to specifically mention that an interview was conducted by telephone or e-mail.

A research interview is a structured social interaction between a researcher and a subject who is identified as a potential source of information, in which the interviewer initiates and controls the exchange to obtain quantifiable and comparable information relevant to an emerging or previously stated hypothesis.

Unstructured interviews involve the researcher asking few questions and letting the interviewee do most of the talking, to find out as much information as possible. This type of interview is also known as a "Life History" Interview and is the favored approach for a history researcher. It attempts to achieve a complete understanding of the interviewees point of view.

Semi-Structured Interviews are perhaps the most commonly used in qualitative social research. The researcher attempts to obtain certain information which can then be compared and contrasted with information from other interviews. The researcher may produce an interview schedule containing a list of questions the researcher will ask the interviewee.

In a police setting, interviewing can be used to obtain information from a suspect, witness, or victim. Interviews can be conducted in a formal police station setting, or they can be conducted on the street or at someone's home. An interview turns into an interrogation only once someone is taken into custody and there is suspicion that they have committed an offense.

A Selling interview usually follows several precise steps. It starts with questions to the prospective buyers about its situation and its needs. It is followed by a precise offer that is supposed to fit the motivations the prospect has expressed. Then the seller stresses the advantages of the offer, handles objections, and—if need be and when possible—adjusts the offer. It ends with an attempt to close the deal, which might entail some negotiation.

Retrieved from https://www.newworldencyclopedia.org/p/index.php?title=Interview&oldid=1009519
Categories:
Hidden category:
This page was last edited on 4 March 2018, at 22:44.
Content is available under Creative Commons Attribution/Share-Alike License; additional terms may apply. See Terms of Use for details.