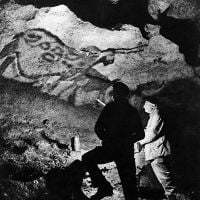 Abbe Breuil looking at art in the Lascaux caves.

Henri-Édouard-Prosper Breuil often referred to as Abbé Breuil (February 28, 1877 - August 14, 1961), was a French archaeologist and paleontologist, famous for his studies of prehistoric cave art, such as that discovered at Altamira and Lascaux. Through his recording of the details of such art he was able to develop a system, which has continued to be useful, to analyze the styles of art and the time periods in which they were produced, as well as interpret the meaning underlying the images. His imaginative writings, combined with beautiful illustrations, inspired readers and were instrumental in bringing the art of ancient peoples to the attention of the world. Unfortunately, in some cases, such as "The White Lady," his imagination went beyond reality, and his interpretation of the artwork was very misleading. Despite such mistakes, Breuil's work has lasting value in its contribution to our appreciation of the art of prehistoric peoples. Through appreciating their art, the lives of these people from the past come to play a role in the advancement of the world as one human family.

Henri-Édouard-Prosper Breuil was born on February 28, 1877, in Mortain, France, but grew up in Clermont of Oise, where his father worked as a public persecutor. As a young boy Breuil showed an interest in entomology and zoology, and wanted to study medicine. However his poor health and strong faith in God led him to theology. He entered the Issey-les-Moulineaux Seminary in 1895, and was ordained a priest in 1897. However, it was at the seminary that Breuil developed strong interest for archaeology, which became the primary focus in his life.

After meeting a fellow student, archaeologist Geoffray d’Ault du Mesnil, Breuil joined several archeological expeditions. His love for archaeology grew stronger, and in 1900 Breuil started to specialize in cave art. In 1901, he studied caves at Combarelles and Font-de-Gaume in the Dordogne, which had beautiful drawings from prehistoric times.

During the next several years he spent much time in Spain, studying the Altamira cave paintings. Already by that time he developed an analytic power to classify, with much certainty, the particular time frame when certain paintings were made. His work showed that paintings from Altamira were genuinely Paleolithic. Breuil’s observations and copies of the Altamira paintings were published by the Institut de Paléontologie Humaine in 1908.

In 1929, he became chairman of the department of prehistory at the Collège de France, at the same time carrying a duty as a professor of prehistoric art. He visited South Africa for the first time in 1929. In 1938 he was made a member of the Institut de France.

In 1940, Breuil participated in one of the most famous discoveries of his career: the cave at Lascaux, in southern France. Breuil was able to copy the drawings and classify them according to the classification system he had developed earlier.

During World War II Breuil traveled around Africa, studying caves and rock formations rich with artwork. He visited the Orange Free State, Lesotho, Mozambique, Cape Town, Port Elizabeth, and the valley of the Vaal. After the war he spent almost six years in Rhodesia, South Africa, Zambia, Zimbabwe, the Belgian Congo, Angola, and Namibia. He spent the most time studying "The White Lady" of Brandberg, a famous painting on a mountain in Namibia. This study occupied the rest of Breuil’s career.

Breuil retired from his teaching duties at the Collège de France in 1947, but continued to write and travel. His published his principal work, Four Hundred Centuries of Cave Art, in 1952. He died on Aug. 14, 1961, at L'Isle-Adam, Seine-et-Oise.

Henri Breuil is well-known for his work on cave art, and was regarded as an expert on the subject during his lifetime. His expertise in Paleolithic art started with his early study of Bronze Age sites near Paris. He copied each drawing or carving on the wall, and reproduced them in color. Through this he learned to distinguish the different styles and periods in which the paintings were made. Later, according to the color or style of painting, he could classify paintings and put them into the specific period of time in which they were made. In a lesser known paper from 1912, Les Subdivisions du Paléolithique supérieur et leur signification (The Subdivisions of the Upper Paleolithic and Their Meaning), Breuil presented a classification system that was still used long after his death.

Breuil attempted to explain the meaning behind certain images. He developed a theory of “sympathetic magic,” arguing that particular images were used with specific purpose, such as to promote fertility or bring success in hunting. Although Breuil’s ideas were used well into the twentieth century, they were largely superseded later.

Breuil’s work in Altamira and Lascaux was especially famous. He copied every little detail he found on the walls, and determined its origin. Based on his previous work at Font-de-Gaume and Les Combarelles, he was able to determine the authenticity of the paintings in Altamira, clarifying the previous dubiety about the painting being a forgery. He claimed that the hands, silhouettes, and tectiforms found in the paintings date from the Aurignacian period, monochromes to the lower Magdalenian; while the polychromes date to the upper Magdalenian period.

Breuil’s work, however, was not without its critics. It was the style of his writing that his colleagues objected to the most. Breuil liked to paint vivid pictures in the minds of his readers. He was averse toward the dry, analytical method archaeologists often used in their work. Instead, Breuil would make up a story, and often speculate about many points of the artwork he was describing. Particularly controversial was his work on "The White Lady" of Brandberg in Namibia. Breuil argued that an ancient tribe of Europeans that once lived in Africa produced the artwork. His claims were characterized as “overly romanticized,” and finally dismissed in 1956 when it was concluded that the picture was produced by native African Bushmen, whose many rock paintings exist throughout Southern Africa.

Breuil made significant contributions to the development of classification system of data relating to the Paleolithic era. His copying methods, and a synchronology for dating cave art, were substantial and used for a considerable time, although scientific advances such as carbon dating have superseded his stylistic analysis. He also contributed to the development of the technical vocabulary of the branch of paleontology dealing with primitive art.

His vivid descriptions, filled with details of color and the exotic atmosphere of unusual findings, excited the world about cave paintings. His work on the art found in the caves of Lascaux brought the beautiful artwork of ancient peoples to the attention of the world. On the other hand, his overly romantic descriptions and personal bias led to great controversy when he attributed "The White Lady" painting to a European tribe, when in fact it turned out to be the work of African Bushmen artists.

Retrieved from https://www.newworldencyclopedia.org/p/index.php?title=Henri_Breuil&oldid=1097696
Categories:
Hidden category:
This page was last edited on 25 January 2023, at 15:20.
Content is available under Creative Commons Attribution/Share-Alike License; additional terms may apply. See Terms of Use for details.