Henry Louis Aaron (February 5, 1934 - ) was an American baseball player whose consistently high level of play over a career of 23 seasons and grace and fortitude in the face of racial hostility, established him as one of the most admired figures in the game. He is best remembered for surpassing the most revered record in baseball—Babe Ruth's career home run record—on April 8, 1974.

Aaron also holds the career marks for runs batted in (2,297), extra base hits (1,477), total bases (6,856), and consecutive seasons with 150 or more hits (17). He won one World Series ring with the Milwaukee Braves in 1957, and the National League Most Valuable Player Award the same year. He also earned three Gold Glove Awards and made a record-tying 24 All-Star appearances.

Hank Aaron is among a handful of sports stars whose achievement transcended the sphere of athletics. Beginning his pro career just six years after Jackie Robinson broke professional baseball's color barrier, Aaron entered the Major Leagues in a challenging time in the nation's race relations. His dedication, consistency, and poise on and off the field won him the admiration of people of all colors.

During the 1973-1974 season, as he approached Ruth's record, Aaron faced racial abuse and even death threats from those who did not want to see the record shattered, especially by a player of color. Aaron's superlative play led to his induction into the Baseball Hall of Fame on August 1, 1982, with votes on 97.8 percent of the ballots, second to only the legendary Ty Cobb.

Henry Aaron was born in Mobile, Alabama. He attended Central High School as a freshman and a sophomore, playing outfield and third base for the school's baseball team. He helped lead his team to the Negro High School Championship both years, and also excelled in football during these years.

Aaron's last two years of high school were spent at the Josephine Allen Institute, a private high school in Alabama. During this time, he also played on the Pritchett Athletics, a semi-pro team, as their shortstop and third baseman. After being seen by scout Ed Scott, he signed a contract with the Mobile Black Bears for $3.00 a game. Because his mother would not allow him to travel, the contract was written only for games played in and around the city. It was on the Black Bears that sports agent Bunny Downs found Aaron.

By 1951, Aaron had established himself as a talented ballplayer. He helped lead the Indianapolis Clowns to victory in the 1952 Negro League World Series. Shortly thereafter, he tried out for the Brooklyn Dodgers, but he did not make the team.

On June 14, 1952, the Boston Braves acquired Aaron's contract for $10,000. The team assigned him to the Eau Claire Bears, the Braves' Northern League farm club. That year, Aaron won the league's Rookie of the Year honor as the Bears' second baseman. He also received a raise to $350.00 a month.

In his last stop before the majors, Aaron played winter ball in Puerto Rico. That spring, after the Milwaukee Braves' left fielder Bobby Thomson broke his ankle sliding into second base, Aaron made his first spring training start for the the team in left field. He hit a home run.

On April 13, 1954, Aaron made his major league debut and went 0-for-5 against the Cincinatti Redlegs' Joe Nuxhall. Two days later, Aaron collected his first major league hit, a single off Cardinals pitcher Vic Raschi. Aaron hit his first Major League home run eight days later, also off Raschi. Over the next 122 games, Aaron batted .280 with 13 home runs before he suffered a broken ankle on September 5.

The following season, Aaron made his first All-Star team. He would go on to make a record-tying 24 All-Star Games appearances, a record shared with Willie Mays and Stan Musial. Aaron finished the season with a .314 average, 27 home runs, and 106 RBI. In 1956, Aaron hit .328 and captured first of two NL batting titles. He was also named NL Player of the Year by The Sporting News.

In 1957, Aaron won his only NL MLB Most Valuable Player award. He batted .322 and led the league in home runs and runs batted in. On September 23, 1957, Aaron hit a two-run home run in the eleventh inning of a game against the Cardinals to clinch the Braves' first pennant in Milwaukee. Aaron was carried off the field by his teammates. Milwaukee went on to win the World Series against the Yankees. Aaron did his part by hitting .393 with three homers and seven RBI in the series.

In 1958, Aaron hit .326, with 30 home runs and 95 RBI. He led the Braves to another pennant, but this time they lost a seven-game Series to the Yankees. Aaron finished third in the National League's MVP race, but picked up his first Gold Glove.

During the next several years, Aaron had some of his best seasons as a major league player. On June 21, 1959, against the San Francisco Giants, he hit three home runs. In 1961, Aaron, Eddie Mathews, Joe Adcock, and Frank Thomas became the first four players ever to hit successive home runs in a game.

Aaron nearly won the triple crown—for home runs, RBI, and batting average—in 1963. He lead the league with 44 home runs and 130 RBI and finished second in batting. He became the third player in history to steal 30 bases and hit 30 home runs in a single season. Despite his impressive year, he again finished third in the MVP voting.

The Braves moved from Milwaukee to Atlanta after the 1965 season. There, he became the eighth player in history to hit 500 career home runs, the second youngest player to reach the plateau at 34 years, five months and nine days-of-age.

On July 31, 1969, Aaron hit his 537th home run. This moved him into third place on the career home run list behind Willie Mays and Babe Ruth. At the end of the season, Aaron again finished third in the MVP voting.

The next year, Aaron reached two career milestones. On May 17, 1970 Aaron collected his 3,000th hit. He thus became the first player to get both 3,000 career hits and 500 career home runs. Aaron also established the National League record for most seasons with 30 or more home runs.

On April 27, 1971, Aaron hit his 600th career home run. On July 31, Aaron hit his first home run in the All-Star Game. He hit his 40th home run of the season against the Giants' Jerry Johnson on August 10. This established a National League record for most seasons with 40 or more home runs (seven). He hit a total of 47 home runs during the season and finished third in MVP voting for the sixth time.

During the strike-shortened season of 1972, Aaron tied and then surpassed Willie Mays for second place on the career home run list. As the year came to a close, Aaron broke Stan Musial's major league record for total bases achieved (6,134). 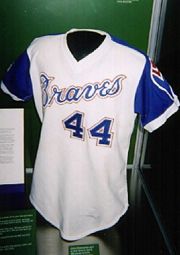 The chase to pass Babe Ruth's career home run record heated up in the summer of 1973. Aaron, at the age of 39, managed to hit 40 home runs in 392 at-bats that season. Aaron had hit Home Run 713 on September 29, 1973. With one day left in the season, many expected Aaron to tie the record. Against the Houston Astros a paid attendance of 40,517 watched as Aaron was unable to tie the record. After the game, Aaron stated that his only fear was that he may not live long enough to see the 1974 season.

Aaron endured death threats and a large assortment of racist hate mail from people who did not want to see a black man break Ruth's record. Aaron also received a massive flood of public support. Babe Ruth's widow, Claire Hodgson, denounced the racists and declared that her husband would have enthusiastically cheered Aaron's attempt at the record (Stanton 2004, 25).

The Braves opened the 1974 season on the road in Cincinnati with a three-game series. Braves management wanted Aaron to break the record in Atlanta. Therefore, they planned to have Aaron sit out the first three games of the season. Commissioner Bowie Kuhn ruled that he had to play two out of three. He tied Babe Ruth's record in his very first at bat off Reds pitcher Jack Billingham, but did not hit another home run in the series.

In Atlanta, 53,775 people set a Braves record for attendance on on April 8, 1974, as Aaron hit career home run 715 in the fourth inning off Los Angeles pitcher Al Downing. While cannons were fired in celebration, two college students ran next to Aaron around the base paths. Aaron's mother ran onto the field as well. A few months later, on October 5, 1974, Aaron hit his 733rd and final home run as a Brave.

During the off-season, the Braves returned Aaron to Milwaukee in a trade with the Milwaukee Brewers for Roger Alexander. Because the Brewers were an American League team, Aaron was able to extend his career by taking advantage of the designated hitter rule, by which one hitter, substituting for the pitcher, did not have to play on defense. Aaron thus broke baseball's all-time RBI record on May 1, 1975. On July 20, 1976, he hit his 755th and final home run, at Milwaukee County Stadium.

On February 5, 1999, at his 65th birthday celebration, Major League Baseball announced the introduction of the Hank Aaron Award. The award is presented to the player totaling the most hits, home runs, and runs batted in. Aaron becomes only the fourth Major League player to have an award named in his honor (Cy Young, pitching; Jackie Robinson, rookie of the year; and Roberto Clemente, citizenship).

During Aaron's illustrious playing days, he embodied what was considered to be a complete hitter, helping his team with a home run or base hit. To later generations he earned enduring fame for his home runs and his unrelenting pursuit of Babe Ruth's record.

Hank Aaron at the White House in 1978

As he closed in on the record, Aaron had to deal with the continuous hate mail, venomous racial epithets, and death threats that were considered so real that the Atlanta Braves and the City of Atlanta dispatched a policeman to escort the outfielder to and from the ball park, then stay with him until he went to bed.

Aaron broke the "unbreakable" record on April 4, 1974, by hitting a baseball over the wall in Atlanta's Fulton County Stadium. It was the 715th home run of his career, surpassing the 714 homers hit by Babe Ruth. Although Barry Bonds later broke Aaron's career record of 755 home runs on September 23, 2006, amid controversy over steroid use, Aaron will forever be remembered as the player who, despite numerous threats, broke Ruth's famed record.

On August 1, 1982, Hank Aaron was inducted into the Baseball Hall of Fame and received votes on 97.8 percent of the ballots, second in history only to Ty Cobb, who received votes on 98.2 percent of the ballot in the inaugural 1936 Hall of Fame election. In 1999, editors at The Sporting News ranked Hank Aaron 5th on their list of "Baseball's 100 Greatest Players" and baseball fans named Aaron to the Major League Baseball All-Century Team.

Statues of Aaron stand outside the front entrance of both Turner Field and Miller Park. In honor of Aaron, the address Turner Field was set as 755 Hank Aaron Drive. His autobiography, I Had a Hammer, was published in 1990. The book's title is a play on his nicknames, "The Hammer" and "Hammerin' Hank," and the freedom anthem "If I Had a Hammer."

In 2002, Aaron received the Presidential Medal of Freedom, the nation's highest civilian honor.