Roberto Clemente Walker (August 18, 1934 – December 31, 1972) was a Major League Baseball right fielder and right-handed batter. He was elected to the Hall of Fame posthumously in 1973 as the first Hispanic American to be selected, and the only exception to the mandatory five-year post-retirement waiting period since it was instituted in 1954. He is also known for being the only player to have ever scored a walk-off, inside-the-park grand slam.[1]

Clemente was born in Carolina, Puerto Rico, the youngest of four children. He played 18 seasons in the majors from 1955 to 1972, all with the Pittsburgh Pirates, winning the National League MLB Most Valuable Player Award in 1966. He was very helpful in his native land and in other Latin American countries, often bringing baseball supplies and food to residents. He died in a plane crash on December 31, 1972, while en route to deliver aid to earthquake victims in Nicaragua. His body was never recovered. After his death he was awarded the Presidential Medal of Freedom and numerous other honors both in the U.S. and his native Puerto Rico.

Roberto Clemente Walker was born on August 18, 1934, to Melchor Clemente and Luisa Walker de Clemente in Carolina, Puerto Rico, which is slightly east of the capital city San Juan. Roberto, the youngest of Luisa's seven children (three of whom were from a previous marriage), would contribute money to the family by loading shovels into his father's truck for construction company deliveries. Melchor was also a foreman in charge of sugar cane cutters. His mother was a laundress and had assorted jobs assisting workers at the sugar cane plantation.

Even at an early age, it was clear that Clemente had athletic ability. At 14, he joined a softball team organized by Roberto Marín (an influential figure in his life), who noticed the boy's strong throwing arm and began using him at shortstop, eventually moving him to the outfield. Whatever position he played, Roberto was exceptional. "His name became known for his long hits to right field, and for his sensational catches," said Marín. "Everyone had their eyes on him."[2]

At Vizcarrondo High School in Carolina, Clemente participated in the javelin throw with such ability that it was thought he might be qualified to represent Puerto Rico in the Olympics.

Although he had great all-around athletic ability, Roberto decided to focus on baseball, even though it meant forgoing any dreams of participating in the Olympics. He began playing for a strong amateur team, the Juncos Mules. In 1952, Roberto Clemente was spotted by a scout from the professional hardball team in the Puerto Rican town of Santurce and offered a contract. He signed with the club for $40 per month, plus a $500 bonus.

With his natural talent, Clemente had an amazing ability to make contact at the plate coupled with a tremendous arm in the field. It wasn't long before the budding star caught the eye of major league scouts while playing with the Santurce Crabbers (alongside Willie Mays) in the Puerto Rican Winter League. At the age of 18, he hit .356 for Santurce in the winter of 1952–1953.

Clemente soon caught the attention of the major league scouts, and later in 1953 Al Campanis signed him for the Brooklyn Dodgers with a $10,000 bonus. His new team, however, was unable to fit him into a star-studded outfield featuring 1953 National League All-Stars Carl Furillo, Duke Snider, and Jackie Robinson. The Dodgers chose to have Clemente spend the 1954 season in the minors, with the Montreal Royals, even though it meant they could lose him at the end of the year.

Many believe that the Dodgers organization tried to hide him—that is, play him very little so that other teams wouldn't notice him. Clemente himself maintained that the Royals' strategy was to make him look bad, benching him if he did well, and keeping him in the lineup if he was doing poorly. Other analysts believe the statistics do not bear out these allegations, however. In any case, he finished at Montreal with a .257 batting average and 2 home runs in 148 at-bats.

Regardless of the intentions of the Dodgers, Pittsburgh Pirates president Branch Rickey drafted Clemente with the first selection in the post-season draft. Pittsburgh at the time was a fixture at the bottom of the National League and had lost 100 games in each of the three previous seasons, with little to lose.

Although Clemente's skill with the glove was immediately apparent, he was less impressive at the plate. He batted .255 with five home runs and 47 RBI in his first full season in 1955. In 1956, however, he hit his stride, producing a .311 batting average (third in the league) at the age of 21. It was the first of 13 seasons in which Clemente would hit above .300.

While Clemente had begun to fulfill his potential, the Pirates continued to struggle through the 1950s, although they did manage their first winning season since 1948 in 1959. In 1960, however, the team broke through to a 95-59 record, a National League pennant, and a thrilling seven-game World Series victory over the New York Yankees, who were then led by Mickey Mantle and Roger Maris. Clemente batted .310 in the series, hitting safely at least once in every game. That year his .314 batting average, 16 home runs, and stellar defense also earned him his first trip to the All-Star game.

Regardless of his unquestionable success, some (including, supposedly, Clemente himself) felt that the media did not give him the recognition he deserved. Despite being the offensive and defensive leader of the strong 1960 Pirates club, he finished only eighth in voting for the MVP that season; teammate Dick Groat received the award. In protest, Clemente reportedly never wore his 1960 World Series ring. He was also labeled a hypochondriac due to nagging injuries early in his career, although he played in 144 or more games in each season from 1960 to 1967. The 1966 MVP award was, in the eyes of many Pittsburgh fans, a long overdue acknowledgment of his greatness.

In 1971, the Pirates again won the National League pennant behind Willie Stargell's 48 home runs and Clemente's .341 batting average. They faced the Baltimore Orioles in the World Series. Baltimore had won 100 games and swept the American League Championship Series—for the third consecutive year—and were the defending World Series champions. Undaunted, Pittsburgh came back from being down two games to none in the series to win the series in seven for the second time in Clemente's career. He was the clear star of the series, with an incredible .414 batting average (12 hits in 29 at-bats), typically spectacular defense, and a crucial solo home run in the deciding 2-1 Game Seven victory. His efforts earned him the World Series MVP award.

Struggling with injuries, Clemente managed to appear in only 102 games in 1972, but still hit .312 for his final .300 season. On September 30 in a game at Three Rivers Stadium, he hit a double off Jon Matlack of the New York Mets for his 3,000th hit (the 11th player to earn 3,000 hits). It was the last at-bat of his career during a regular season, though he did play in the 1972 NLCS playoffs against the Cincinnati Reds. In the playoffs, he batted .235 as he went 4 for 17. His last game ever was at Cincinnati's Riverfront Stadium in the fifth game of the playoff series.

Clemente was posthumously awarded the Presidential Medal of Freedom in 2002.

A hero in his native Puerto Rico, Clemente spent much of his time during the off-season involved in charity work. He died in a plane crash off the coast of Isla Verde, Puerto Rico on December 31, 1972 while en route to deliver aid to earthquake victims in Nicaragua. His body was never recovered.

The state of New York named a state park after him almost immediately after his death; he now has several schools and parks named after him. The city of Miami, Florida named Roberto Clemente Park in the Hispanic neighborhood of Wynwood after him.

In Pittsburgh, the 6th Street Bridge was renamed in his memory, and the Pirates retired his number 21 at the start of the 1973 season. The right field wall at the Pirates' PNC Park is 21 feet high in honor of Clemente's number. A statue of the outfielder stands outside the park; Clemente was the second Pirate so honored (Honus Wagner was the first). The City of Pittsburgh maintains Roberto Clemente Memorial Park along North Shore Drive in the city's North Side. On the other side of the state, in eastern Pennsylvania, the Roberto Clemente Charter School, in Allentown, is named in Clemente's honor. 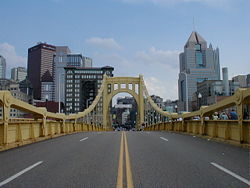 The Roberto Clemente Bridge in Pittsburgh.

Two Connecticut cities honor Roberto Clemente with parks named after him: Hartford's Colt Park ball field and Bridgeport's Seaside Park. On January 1 of each year, Clemente fans gather at the Bridgeport memorial to honor his life and achievements.

Major League Baseball presents the Roberto Clemente Award every year to the player who best follows Clemente's example with humanitarian work. In 1973, Clemente was awarded the Congressional Gold Medal. In 2002, he was posthumously awarded the Presidential Medal of Freedom. In 2003, he was inducted into the U.S. Marine Corps Sports Hall of Fame. There is also currently a campaign underway to have all major league teams retire Clemente's number. Supporters cite an influence on baseball at least as strong as that of Jackie Robinson, whose number is also retired throughout Major League Baseball.

In 1999, Clemente ranked number 20 on the Sporting News list of the 100 Greatest Baseball Players, the highest-ranking Latino player. Later that year, Clemente was nominated as a finalist for the Major League Baseball All-Century Team. In 2003, Clemente was inducted into the National Museum of the United States Marine Corps Hall of Fame. On October 26, 2005, he was named a member of Major League Baseball's Latino Legends Team. The five-year waiting period for the National Baseball Hall of Fame was waived to allow him to be elected there immediately.

On August 17, 1984, the day before what would have been his 50th birthday, the United States Postal Service issued a postage stamp honoring Clemente. Designed by Juan Lopez-Bonilla, the spare, clean design shows Clemente wearing his Pirates cap, with the Puerto Rican flag in the background.

At the Major League Baseball All-Star game in Pittsburgh, Pennsylvania on July 11, 2006, many of the players on both teams wore yellow wristbands with the initials "RCW" in honor of Clemente. At the end of the fourth inning, Clemente was awarded the Commissioner's Historical Achievement Award by the commissioner of baseball, given to his widow.

Clemente had one of the most powerful throwing arms in baseball history. Broadcaster Vin Scully colorfully claimed, "Clemente could field the ball in New York and throw out a guy in Pennsylvania."[3] Clemente won 12 Gold Glove Awards for his outstanding defense (a record among outfielders, which he shares with fellow legend Willie Mays); he was reported to be able to throw out a runner from his knees. He recorded 266 outfield assists during his career.

Perhaps Clemente's greatest feat was leading the Pittsburgh Pirates to a seven-game World Series victory over the Baltimore Orioles in 1971. He played in two World Series (1960 and 1971) and got at least one hit in all 14 games. He is one of only a few players to have 10 or more Gold Gloves and a lifetime batting average above .300.